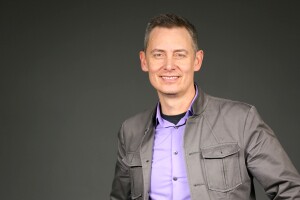 What is your job?
I lead the teams that create the local news you see on KPAX and KAJ. I’m also responsible for the teams that write articles and news alerts on our website, mobile app and social media posts.

When did you start working here?
I started working at KPAX in July of 2019.

Where else have you worked?
This is where it gets fun. In 1992, my career started at KFBB in Great Falls, MT typing in sports scores on Friday nights. The next jump was to KOLR in Springfield, MO as a news photographer. I also worked at KIVI in Boise, KYTV in Springfield, WDAF in Kansas City, KSTU in Salt Lake City, KTVI in St. Louis, KDVR in Denver and KGTV in San Diego. While in San Diego, the San Diego Zoo hired me as the Production Supervisor for San Diego Zoo Kids. Our hearts were in Montana and I accepted my first News Director job in Billings in 2016. I joined the Montana Television Network family in 2017 as News Director for KRTV, the station I grew up watching in North Central Montana. We moved to Missoula in 2019 when I was given the opportunity to lead the news team at KPAX.

Where did you grow up?
I graduated high school in Valier, MT but spent most of my childhood fishing on Birch Creek.

What are some of the biggest news stories you have covered or led coverage of?
The summer of 1998 was filled with the home run record chase between Sammy Sosa and Mark McGwire. I was working for KYTV and was in Busch Stadium the night Mark McGwire broke Roger Maris' record of 61 home runs in a season. I also covered the 2005 Final Four in St. Louis and the 2006 World Series between the Detroit Tigers and St. Louis Cardinals. In 2008, I was part of the team at KDVR that covered the Democratic National Convention. As the chief photographer at KGTV, I worked with several reporters on the devastating 2014 fire season in San Diego County. The 2017 fire season in Montana hit close to home. Being a part of MTN's Wildfire Relief Fund that raised over $600,000 for fire departments across Montana was one of the proudest moments of my career.

What is your philosophy on news?
I believe local journalism has the power to change communities for the better. We want to produce stories that give viewers the information they need to make decisions for a better life. At the same time, it is our responsibility to accurately reflect what is happening in our community. It is our responsibility to share both the good and the bad.

What do you love about living here?
Spending time with family and having the opportunity to cover stories that matter to Montanans.