GFPD responds to allegations of racial discrimination with action 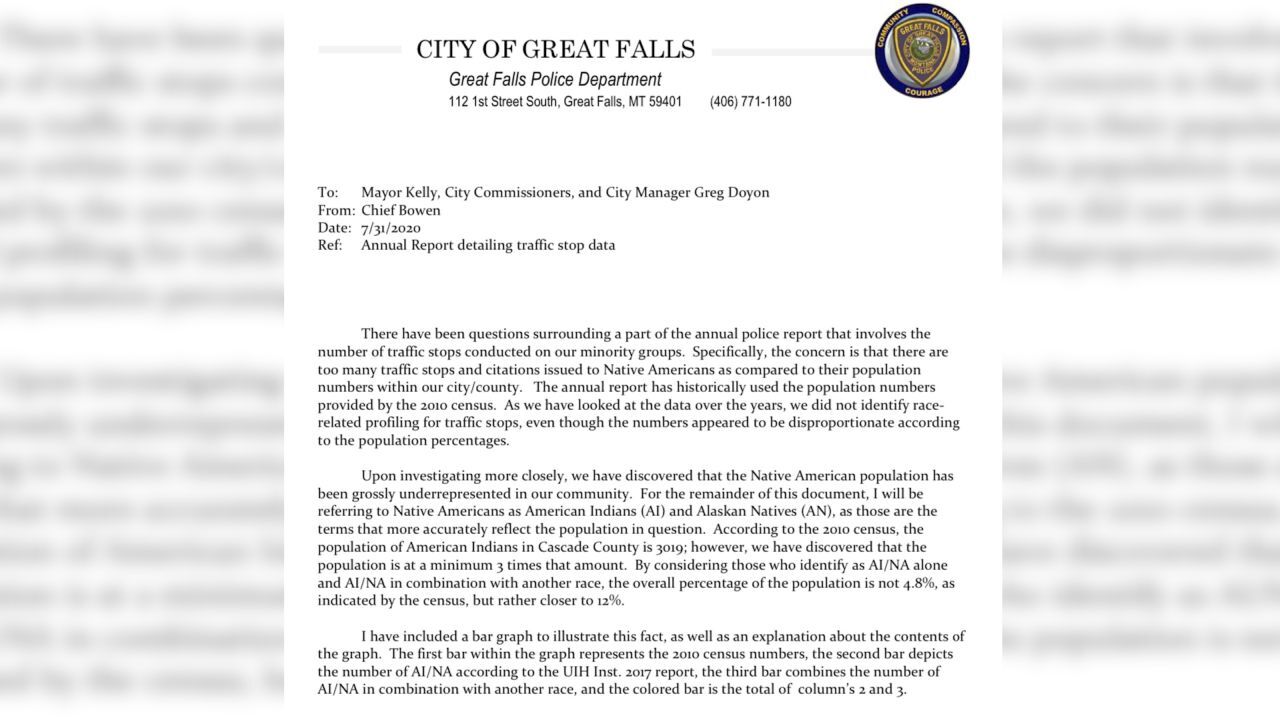 On Friday, the Great Falls Police Department responded to claims of racial discrimination that were made during an educational forum last week.

During last weekend's forum regarding interactions between law enforcement and people of color, presenters held the GFPD accountable for a lack of accessible data and over-policing of minorities within the community.

GFPD responded on Friday with a public release explaining the data and claims in question. After activists at the educational forum demanded more transparency in reporting, GFPD improved access to annual reports from the past five years. Now people can easily access all five years of data by clicking here to visit the GFPD website.

NOTE: There is another document that has been published in the same location as the annual reports labeled **Please Review Prior to Annual Reports**. This is a supplemental document created by Chief Bowen in response to community questions regarding traffic stop and citation data. The GFPD feels it is very important to review the facts within the document by Chief Bowen prior to reviewing the annual reports. Click here to read that document (PDF).

GFPD Chief Bowen also addressed claims that the department’s figures were indicative of racial discrimination, saying these claims are based on inaccurate population data counts, not unjust principles.

“The annual report has historically used the population numbers provided by the 2010 census. As we have looked at the data over the years, we did not identify race-related profiling for traffic stops, even though the numbers appeared to be disproportionate according to the population percentages. Upon investigating more closely, we have discovered that the Native American population has been grossly underrepresented in our community,” Bowen said.

Bowen added that census totals suggest the Native population accounts for 4.8% of the population, when in reality that figure is closer to 12% - since some members of the native population who identify as Native American along with another race were not included in those totals.

To address this error, Bowen said GFPD will modify annual reports in upcoming years to more accurately reflect the population totals for minorities within the area.

Bowen added that he believes GFPD did not engage in racial profiling and will take action to ensure they don’t in the future. “We will continue to examine our data collection and analysis methods to make sure we are using up-to-date data and processes to identify and respond to any indicators of bias. In the meantime, we are continuing to build relationships with minority leaders and discuss policing concerns that impact all minority groups,” Bowen said.

After seeing these changes in action, forum organizer Cedrianna Brownell remarked that these changes are a step in the direction of racial equality. “It's a good first step. there's a lot of things we'd like to get done and so we'd like to continue the dialogue and maybe collaborate on an actual plan such as racial bias training, increasing the amount of data that's actually recorded, and maybe coming up with a comprehensive plan to include diversity - basically blacks and indigenous people of color on oversight boards,” Brownell said.

While she hopes to see even more change enacted within the community, she noted that the speed with which action was taken is a reminder that change is possible: “For the people that keep asking, ‘Why continue to host forums, panels or protests when it’s not really happening here or nothing’s really going to change?', I think this is the answer to their question - that things do change and our community can get better,” Brownell said.

Although no future forums or events have been scheduled, Brownell hopes to meet with GFPD in the near future to discuss ways they can improve interactions between law enforcement and people of color.