UMPD reports shots were fired at a police car being driven by an officer. 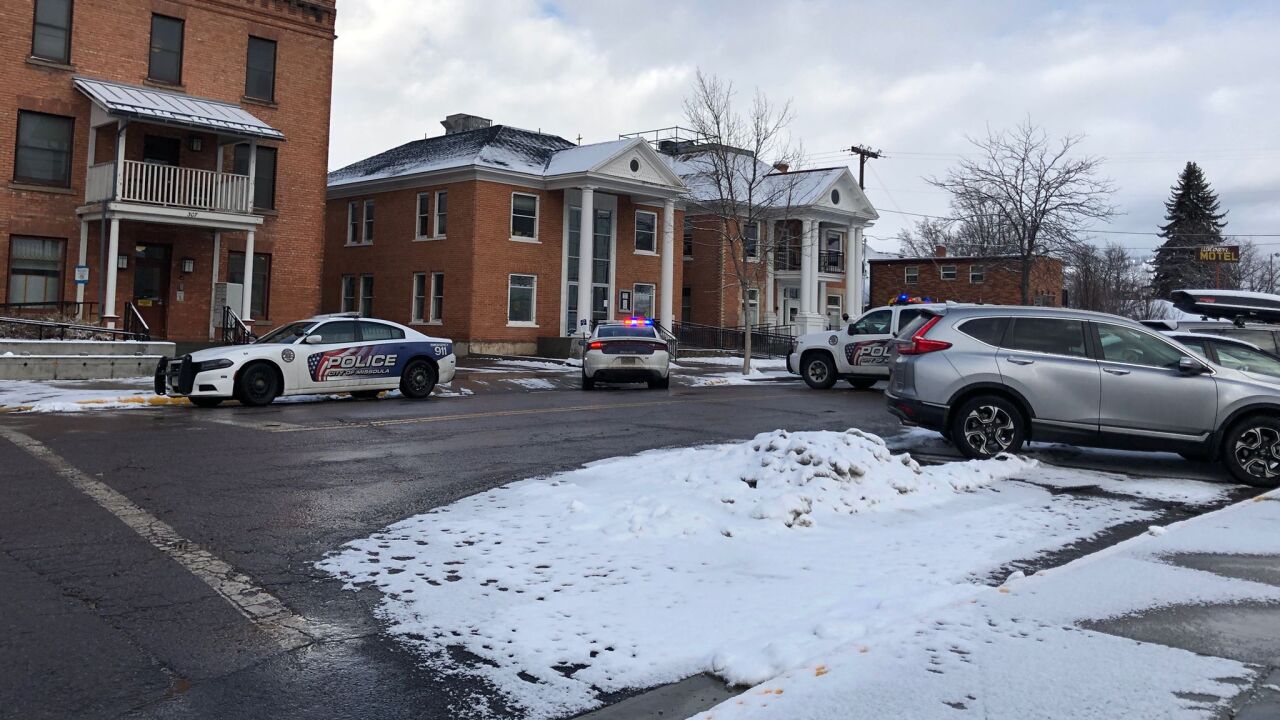 MISSOULA — (UPDATE, 2:30 p.m., 2/12/2020) The lockdown orders for county buildings in downtown Missoula have been lifted after being implemented Wednesday morning due to a shooting incident.

The Missoula County Sheriff's Office reports that units have been cleared and the lockdown has been lifted. All county buildings have reopened and are resuming operations.

The downtown perimeter has been adjusted and remains in place on Woody St. between W. Spruce and W. Broadway. The east/west boundaries are on W. Pine between Orange St. and the Mountain Line Bus Depot. People are asked to avoid that area.

The City of Missoula Police Department is investigating the incident.

At approximately 9:45 a.m., an officer driving north in the 400 block of Woody Street reported the rear window of his patrol car had been shot out, according to MPD. Officers quickly converged on the area and a perimeter was established.

Several streets in downtown Missoula, including Broadway Street in front of the Missoula County Courthouse, were shut down and businesses were asked to shelter in place.

(UPDATE, 2:15 p.m., 2/12/2020) Missoula County Emergency Management had made a post on social media giving an update to the situation in downtown. The post says the Missoula County Courthouse and adjacent buildings, including the Administration Building, Youth Court and Relationship Violence Services, remain on lockdown due to law enforcement activity.

The public is not able to access these facilities at this time.

The lock down is likely to remain for the remainder of the day.

(UPDATE: 12:30 p.m., 2.12.2020)
Missoula City Government ‪posted on their Facebook page that the lock down in downtown has been lifted only for Health Department, Partnership Health Center and Missoula Public Library.

Lock down remains in place for Courthouse and adjacent buildings, including the Administration Building, RVS and Youth Court facilities. ‬

There is no immediate threat to the building.

Students cannot be released for lunch.

UPDATE: 10:57 AM 2.12.2020
Missoula County officials had sent an alert that states the public cannot enter these buildings at this time and should avoid the areas of Ryman and Pine, Woody and Pine, Ryman and Broadway and Woody and Broadway.

Missoula County departments will not be able to provide public services at this time.

UPDATE: 10:30 AM 2.12.2020
Missoula City Hall has sent out a press release stating that City Hall and its council members are under lock down due to the heavy police presence.

We will update you on the situation.

Missoula County 9-1-1 had posted on Facebook that there is a shelter in place and for the public to lock their doors, and to call 911 if you see any suspicious activity.

Missoula Police have blocked a portion of downtown Missoula near the police department and the Mountain Line transfer station after shots were fired at a police car being driven by an officer.

As a result, city buses are being rerouted, streets surrounding the Missoula County Courthouse and police station (Spruce, Pine, Ryman, Woody, etc.) in a five-block radius are closed.

Avoid travel in downtown and, likewise, employees or students traveling to campus may also be impacted.

No suspect details are available.

This is an emerging situation, with no direct threat to campus at this time.

A heavy law enforcement presence is on the scene near the Missoula county courthouse in downtown Missoula Wednesday morning.

We have been told area businesses are under lockdown, including City Hall and St. Patrick Hospital.

It is unknown at this time what is happening. We have reporters on the scene waiting to talk to law enforcement.

Stay with KPAX for updates on this developing story.