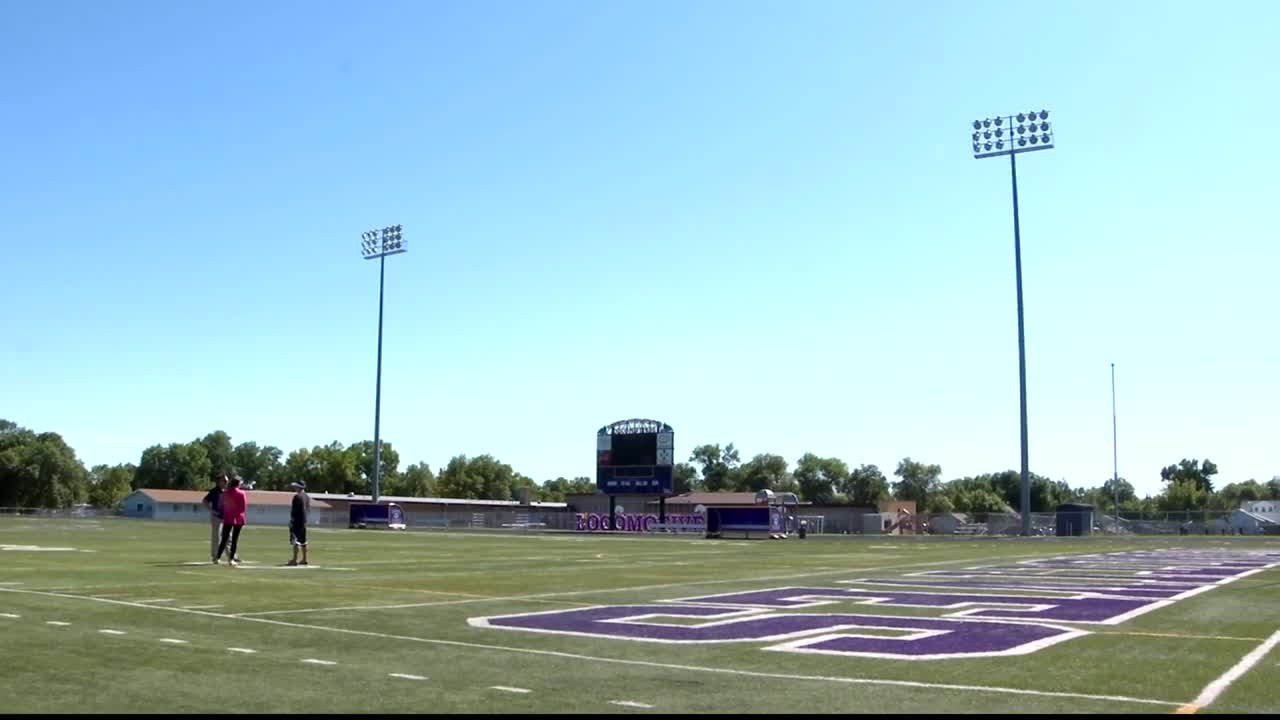 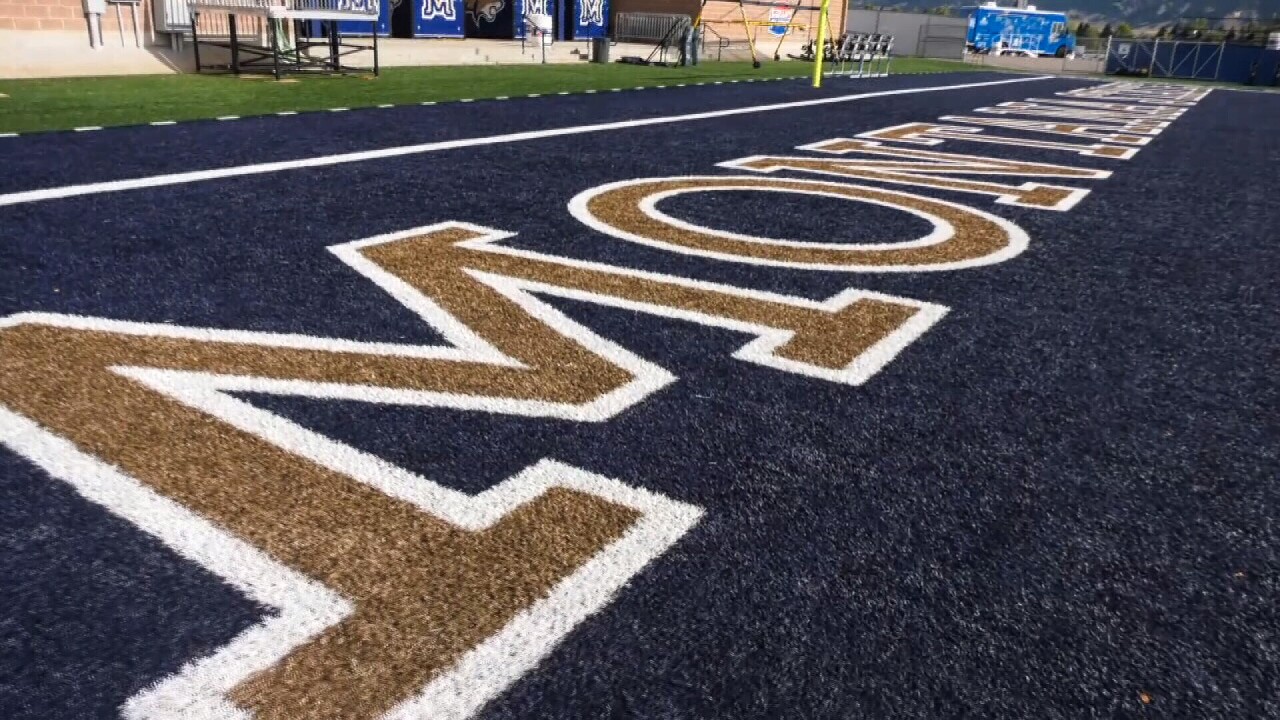 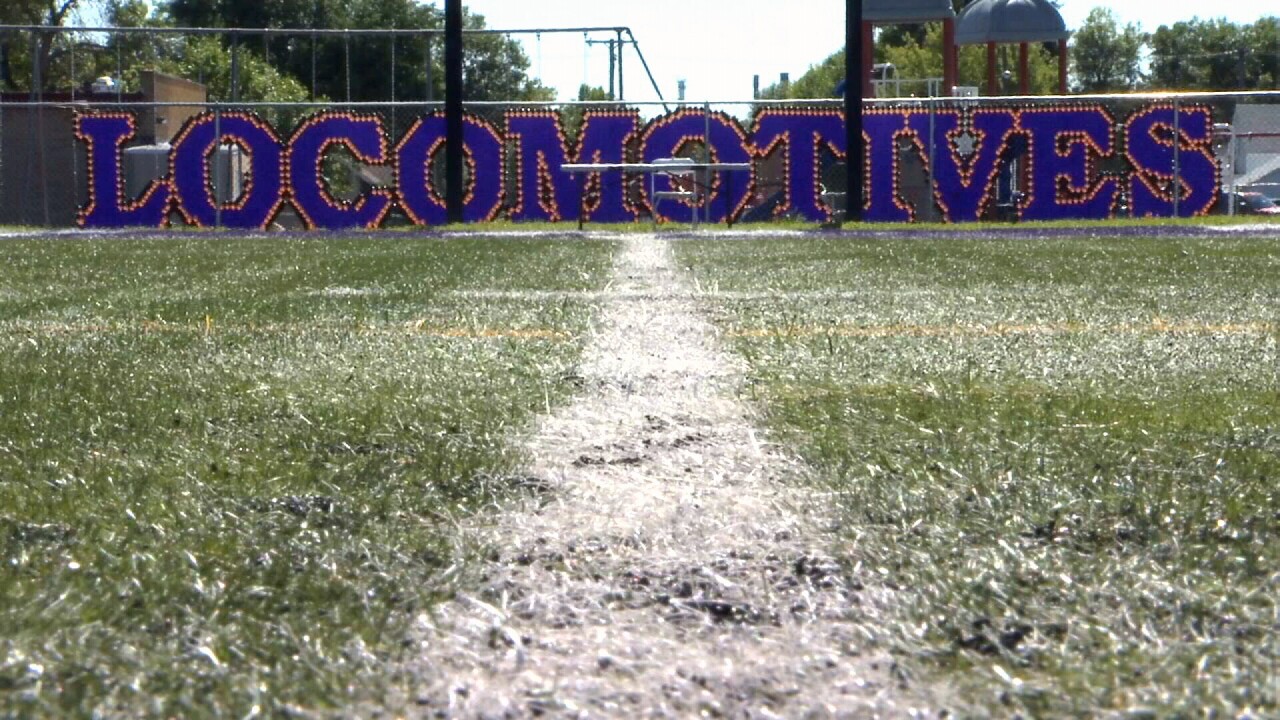 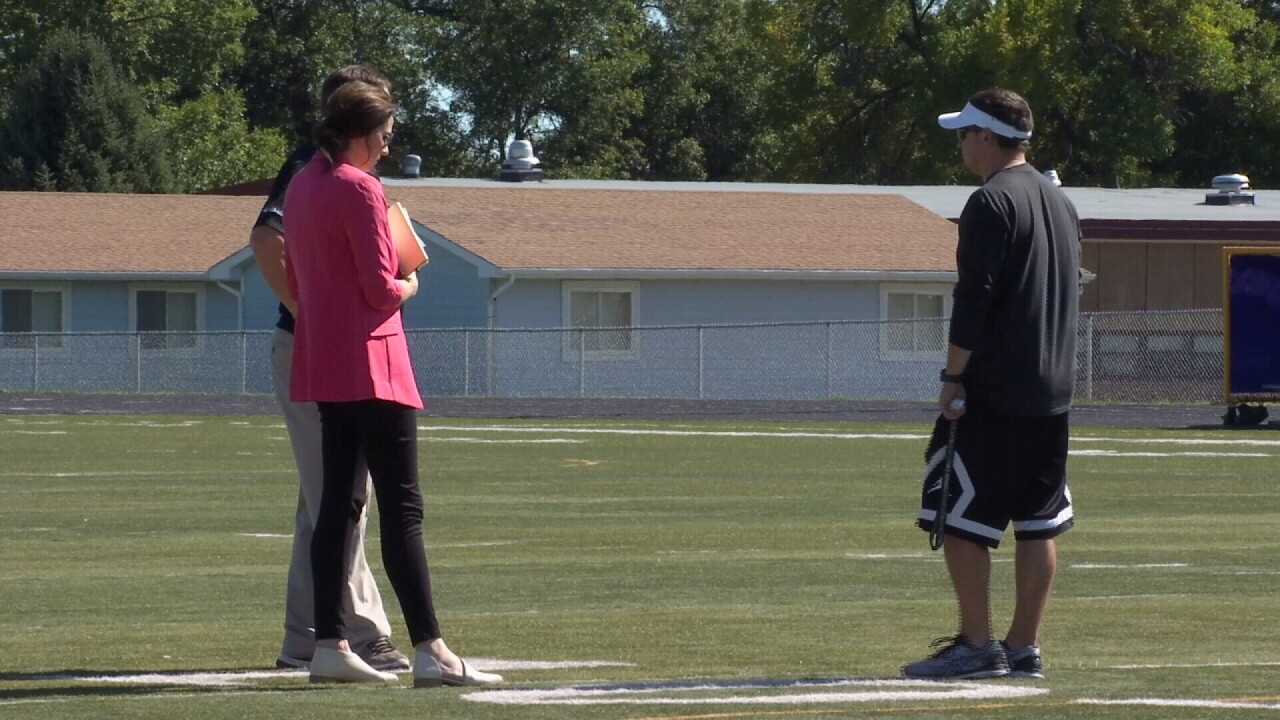 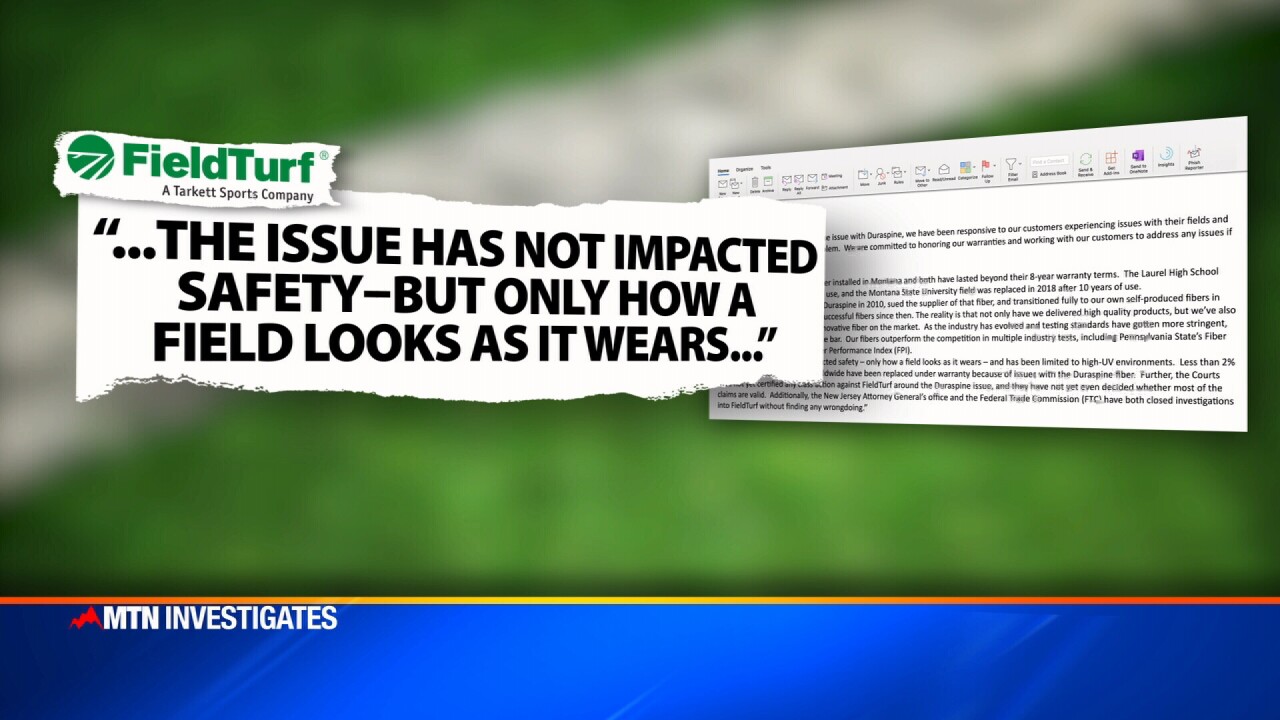 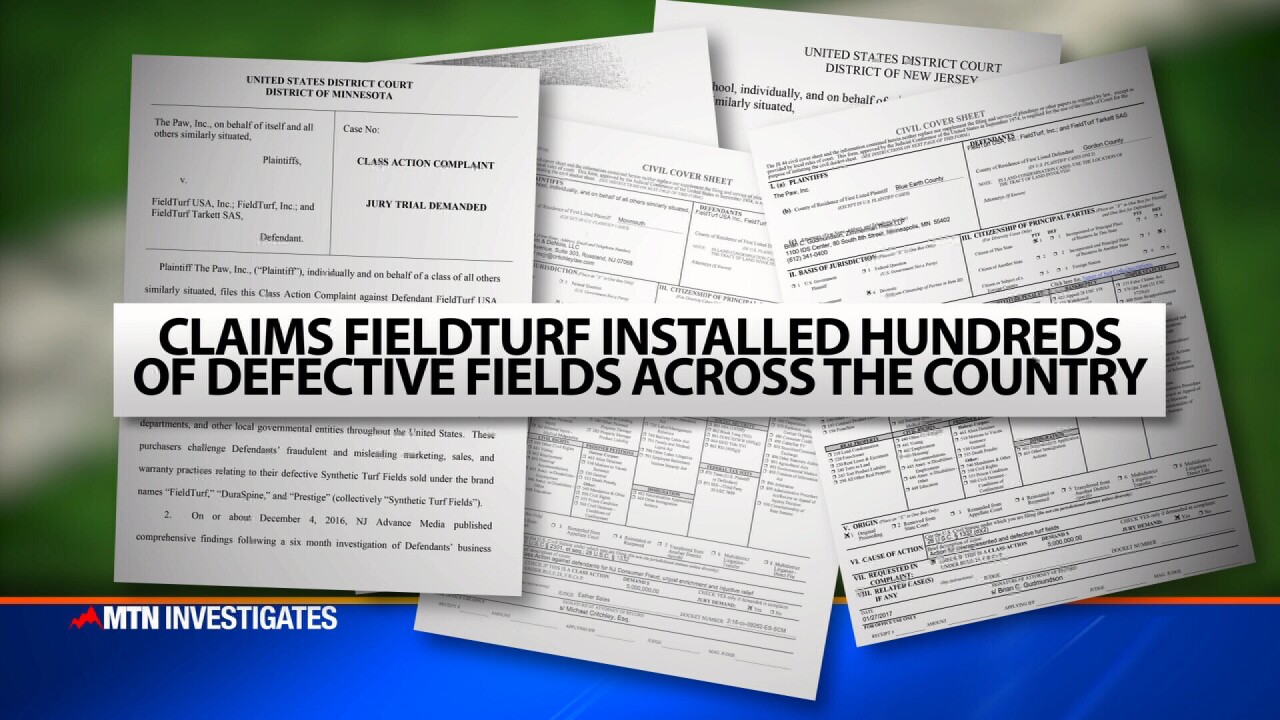 This fall, student athletes across Montana are tying up their cleats, entering the huddle and taking the field- in many cases, a synthetic grass field.

Synthetic grass is an attractive option for many school districts and local governments across the country. Maintenance costs are cut down considerably when you don’t have to water it or cut it.

At Laurel High School, synthetic grass was installed a decade ago, helping transform an aging stadium into a state-of-the-art sports complex, attracting student athletes from all over the state. The district used a Canadian firm FieldTurf to install the synthetic grass, which was part of a $3.9 million voter initative in 2009 to upgrade the stadium.

In recent years, dozens of federal lawsuits have been filed against FieldTurf after questions emerged about the quality of the turf. School districts across the nation have been frustrated to see the synthetic grass, which costs hundreds of thousands of dollars, deteriorating early. In the most recent case, administrators said they feared that poor quality contributed to head injuries for football players.

Now school officials in Laurel are re-examining their turf quality after being alerted by MTN Investigates. Other cities in Montana, such as Billings, are moving forward with FieldTurf project, paid for with taxpayers dollars, without knowledge of the company's past problems.

In 2010, FieldTurf discontinued the sale of Duraspine, a type of synthetic grass they sold and installed to numerous school districts across the country, including Laurel, and then sued the supplier of that fiber.

A spokesman for the company told MTN Investigates in an email that in 2011 the company transitioned fully to its own self-produced fibers, continually "raising the bar" with innovative fibers and an ever-evolving stringent testing standard.

“Since we first became aware of the issue with Duraspine, we have been responsive to our customers experiencing issues with their fields, and we have not hidden from this problem. We are committed to honoring our warranties and working with our customers to address any issues if they arise,” said the spokesman, who asked not to be identified on the record.

In 2014, FieldTurf settled a lawsuit it brought against the supplier of fibers that were alleged to have been defective.

However, two of those Duraspine fields were installed in Montana: at Laurel and Bobcat Stadium at Montana State University in Bozeman in the late 2000s.

Neither school was informed by FieldTurf that the product they had installed was made with fibers that FieldTurf later agreed were defective.

Even before synthetic grass was installed at Laurel High School, the football experience was much different at this Montana class A school. It was a grass field where water often collected, creating pool and mud in advance of games, according to Activities Director Roger Heimbigner.

Back in 2007, voters approved a the measure to build an upgraded facility where the Locomotives play, with grandstands and a track. Two years later, a Duraspine field was installed by FieldTurf.

Fast forward to 2019, when MTN Investigates informed Laurel school district officials that their current field uses the same kind of turf that other school districts across the country claim isn’t holding up.

So, we took a closer look at Laurel’s field.

“It surprises me a little bit,” said Heimbigner. “You look out at our field with the naked eye, and it looks like it’s still in halfway decent shape. We think we have taken care of it, but if there were issues and nobody’s ever contacted us about it, then you wonder.”

Laurel School District has a rotating purchasing program when it comes to athletics. For example: the team’s helmets are conditioned for safety, and other items are transitioned in and out for the purpose of keeping equipment updated and students safe under budget.

There’s even a machine used to ‘"fluff" up the turf to keep it maintained, said Heimbigner.

“Field conditions, all sorts of things you have to take into account to try to make it as safe as possible for kids,” he said.

He says their FieldTurf should ideally have at least several more years of life.

“If my memory serves me right, they said the average life of a field would be about 14 years. This is the 10th year of the field, so that means we’ve got to get at least four more out of it. And hopefully more,” he said.

On the surface, the Laurel field seems to be holding up, according to Heimbigner. But considering the allegations against Field Turf, he’s now questioning what kind of issues could be lurking within.

“Yeah, I mean, I don’t know who the expert is in terms of what an artificial field should look like and the condition of the deterioration. So I think it’s something that we may have to look at,” he said.

Laurel isn’t the only Montana school kept in the dark about FieldTurf.

At Bobcat stadium, home to Montana’s largest university, FieldTurf installed a Duraspine field for the first time in 2008.

When MTN Investigates reached out to Bobcat athletics officials to see if they were aware, officials said they were not. And officials at MSU said they did not recall any point in time when FieldTurf told them about the defective field they installed.

In 2017, when the field was replaced, FieldTurf did the work again. At that point, the company did not install a different type of field, not Duraspine.

According to those at Montana State University, after nine years, the old field was “wearing out”.

Other issues with FieldTurf

This fall, the high school football season at Rancho High School in Las Vegas is uncertain.

This school is just one of the most recent to call attention to FieldTurf after their football field was completed in 2007 and yet again, school officials were not aware that the field installed was a Duraspine field with defective fibers.

“I don’t think it’s right that it took this long,” Assistant Principal Gabrielle Crawford told affilate KTNV. “I started seeing a rise in concussions, and then I started seeing all this stuff just started unfolding like a puzzle waiting to be played.”

The team isn’t even using the football field this season and is instead practicing on a nearby baseball field.

Crawford said she shut down the field after realizing the number of concussions to student athletes have increased and students reporting bad burns on the turf.

A federal lawsuit filed in 2017 claims FieldTurf sold at least 1,450 fields to cities and schools in nearly every state making over $570 million in profits.

Rancho High School Principal James Kuzma said when someone from FieldTurf acknowledged the problem, the company made an offer to replace the entire field with the same defective material.

According to claims in the lawsuit, the company “used customer complaints or warranty claims as an opportunity to up-sell or replace one defective field with another.”

In reponse to an MTN Investigates question, a FieldTurf spokesperson said in an email statement "the issue has not impacted safety but only how the field looks as it wears.”

When a $1.5-million contract with FieldTurf to install a new soccer and lacrosse field at Amend Park in Billings was most recently approved, MTN Investigates had questions for city leaders.

The new turf field will be constructed on the southeast corner of the park, closest to the restrooms. The field will feature LED stadium lights and 500 stadium-style seats with a fence around it.

Kukulski said he was previously not aware of the legal action against FieldTurf but said he’s confident in the product Billings is getting, pointing back to the lawsuit FieldTurf filed against its supplier in 2010.

“It gives me some level of comfort that some of the largest university’s football programs in the country are using it: Alabama, Notre Dame. NFL teams are installing it,” he said.

However, Kukulski did say a primary concern would be its longevity.

“What kind of warranty does it come with and is that warranty something that they’re going to stand behind?” he said.

The city budgeted $1.5 million for this project and acted quickly to approve the project before Sept. 16. That was when the deadline to lock in low rates for purchasing construction material from the state was set to expire.

Officials said the new synthetic turf soccer field will need to be replaced in eight to 10 years.

A spokesman for FieldTurf didn’t comment specifically about why the company never contacted Montana State University and the Laurel School District about installing Duraspine fields with defective fibers.

He instead pointed MTN Investigates back to his previous statement and said both fields have lasted beyond their eight-year warranty terms.

The statement also said the Duraspine issue has not impacted safety – only how a field looks as it wears – and has been limited to high-UV environments.

The statement also said “less than 2% of all FieldTurf fields installed worldwide have been replaced under warranty because of issues with the Duraspine fiber.”

Still, Heimbigner with Laurel School District says he’s curious why no one from the company reached out about the defective field, and now he intends to bring the issue up with the rest of administration.

“Yeah I mean the conversation needs to take place,” he said.