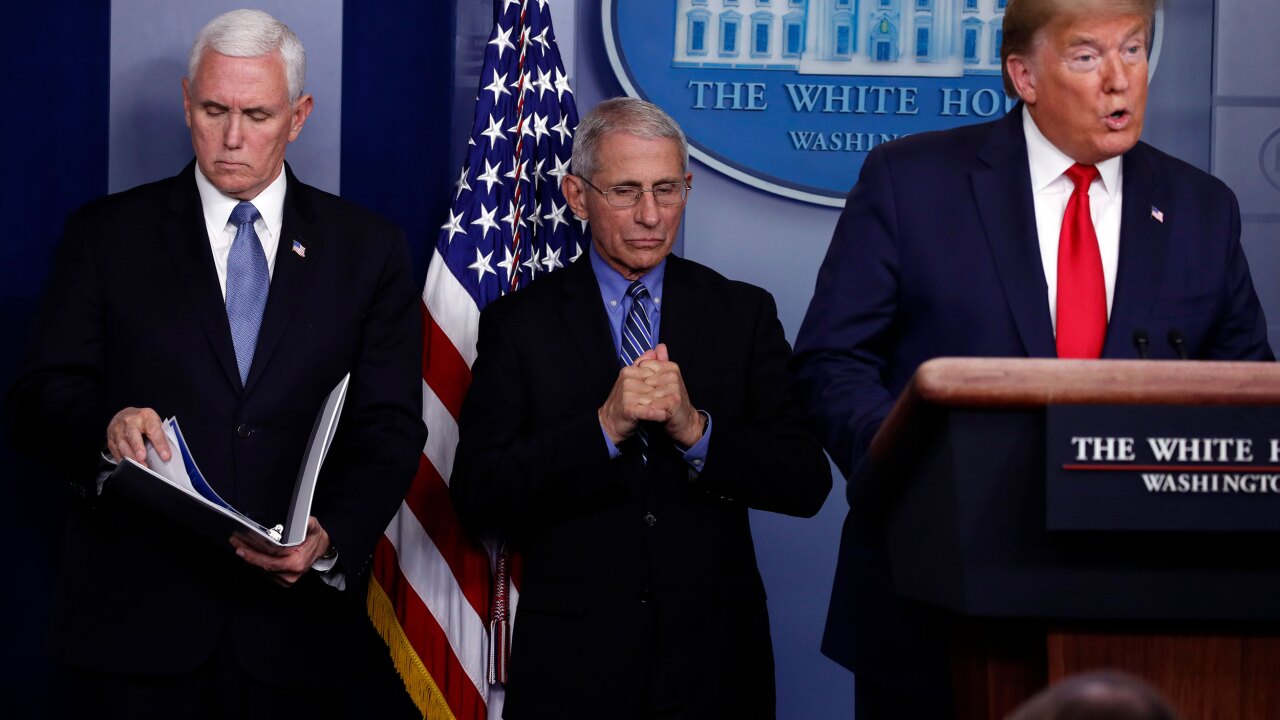 Alex Brandon/AP
<i>Vice President Mike Pence and Dr. Anthony Fauci, director of the National Institute of Allergy and Infectious Diseases, listen as President Donald Trump speaks about the coronavirus in the James Brady Briefing Room, Tuesday, March 24, 2020, in Washington. </i>

Some federal health experts advising President Donald Trump on the Covid-19 response have submitted recommendations to the White House coronavirus task force -- guidelines that seek to reopen "some schools and businesses" in cities where infection rates are low, a senior federal health official directly involved in creating the guidelines told CNN.

The guidelines are only recommendations at this point, which would be considered by the task force then submitted for Trump's approval. In recent days, the White House has said it would review recommendations and announce new guidelines early this week.

The official characterized the recommendations as a "middle-ground agreement" between "keeping the country shut down and trying to reopen the entire thing." The source would not reveal which lower-infection states might be included.

"Manhattan won't be impacted by these guidelines, but places in middle America will," the official said.

INTERACTIVE: Tracking Covid-19 cases in the US

The recommendations come as the number of reported coronavirus deaths doubled to more than 2,000 nationwide in two days. The US has the most confirmed cases worldwide, and as of Saturday, at least 215 million Americans were under various stay-at-home or shelter-in-place orders, according to a CNN count based on Census data.

CNN has reached out to the White House, the US Department of Health and Human Services and the US Centers for Disease Control and Prevention and has not yet received responses.

Dr. Anthony Fauci told CNN's Jake Tapper on "State of the Union" Sunday that he supports the idea of loosening the guidelines, but stressed that a timetable for doing so is still unclear.

"I'm not against releasing the restrictions -- I'm actually for it in an appropriate place," said Fauci, the director of the National Institute of Allergy and Infectious Diseases and a key member of the White House's coronavirus task force.

The proposed recommendations call for cities to reach "benchmarks" before allowing people to go back to school, return to daycare or go back to work, "... while still implementing social distancing measures." The official did not offer any specifics about the benchmarks but did say that "state and local agencies will have to work together to decide what is best for their communities."

The recommendations allow for "schools to open first," the source said. "This is what we should have done in the first place. Some schools should have never closed."

Under the proposed return-to-work recommendations, "businesses would be recommended to try a phased approach."

The official stressed that these would be "guidelines" and that it would be up to individual state and local officials to decide how to move forward.

"We can't have everything open and we can't continue to tell people to stay inside," the source said. "Continuing the pause like we have been is not sustainable socially. It's not sustainable economically."

Vice President Mike Pence told Fox News Saturday night that "we are following the data" as the task force prepares to release guidelines.

"We are literally doing tens of thousands of tests a day," Pence said. "And we've got a great deal more understanding about where people have contracted the coronavirus, who has recovered, who is most at risk and the regions of the country most impacted. So, while the President has said that he would like to open the country up in weeks, not months, we are going to be bringing that data forward to him."

When asked about the risk posed to the general public and how the recommendations would be received, the senior federal health official told CNN: "There is going to be risk."

This story has been updated with comments from Dr. Anthony Fauci.