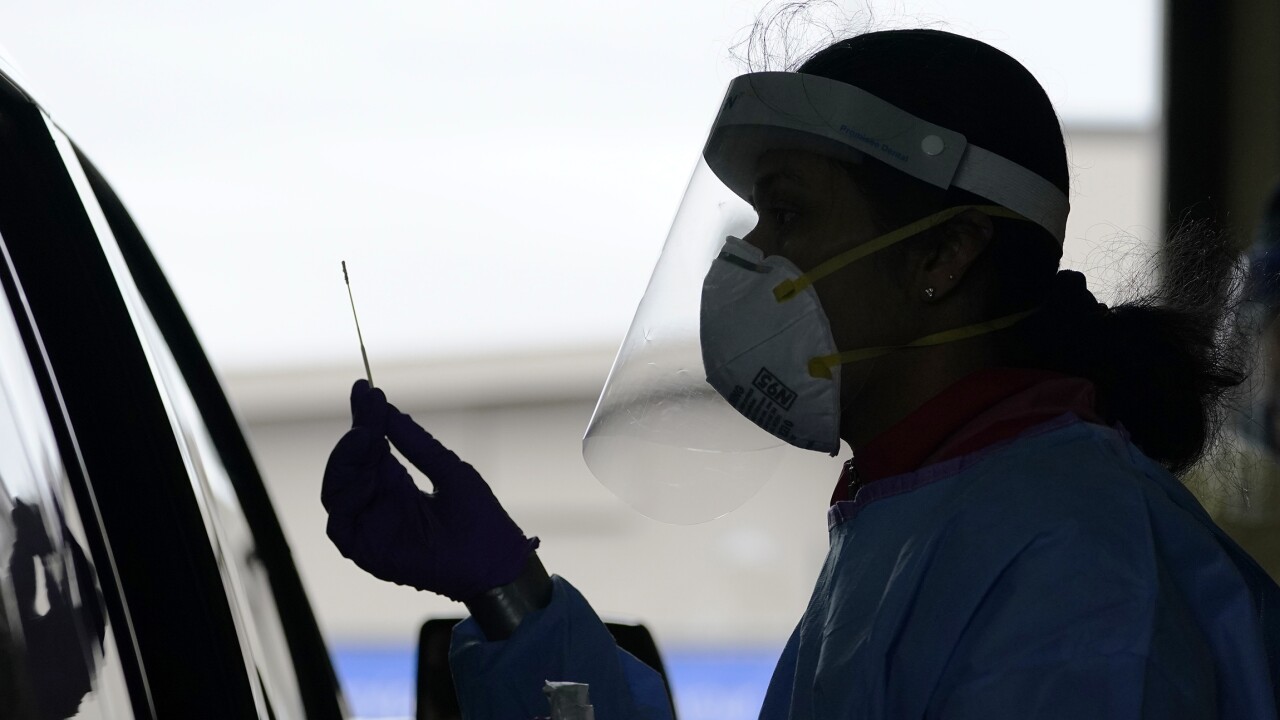 The latest surge of COVID-19 infections has pushed the seven-day average of new daily cases to heights not seen since the pandemic began.

The seven-day average of new cases hit 68,767 on Sunday, topping the previous peak of 67,293 reported on July 22. The two highest single days of new cases were Friday and Saturday, with more than 83,000 new cases added each day.

Health experts say the resurgence of cases that they had warned would strike in the fall and winter is here, and that it could be the worst the US has seen so far. Surging numbers in the US -- where there have been a total of more than 8.6 million infections and 225,230 people have died -- show the nation is at a "dangerous tipping point," former US Food and Drug Administration Commissioner Scott Gottlieb told CBS News on Sunday.

"We're entering what's going to be the steep slope of the curve, of the epidemic curve," Gottlieb told CBS's Margaret Brennan on "Face the Nation."

Though cases are surging across the country, Gottlieb said things are going to start looking worse over the next two or three weeks. He said he doesn't foresee the implementation of forceful policy intervention that could curb the spread.

"If we don't do that, if we miss this window, this is going to continue to accelerate, and it's going to be more difficult to get under control," he said.

A national mask mandate could be a necessary inconvenience

A national mask mandate could be a way of getting the virus under control, Gottlieb wrote in an op-ed for The Wall Street Journal. The article's headline is "Winter Is Coming: Time for a Mask Mandate."

"A mandate can be expressly limited to the next two months," Gottlieb wrote, adding that it's easier to wear a mask in the winter than the summer. "The inconvenience would allow the country to preserve health-care capacity and keep more schools and businesses open."

With deaths expected to rise this winter, policymakers will have to make moves to slow the spread, Gottlieb wrote. There already is no support for reinstating the stay-at-home orders from the spring.

If 95% of Americans wore masks in public, more than 100,000 lives could be saved in the United States through February, according to data released Friday by the Institute for Health Metrics and Evaluation at the University of Washington.

"If people are not wearing masks, then maybe we should be mandating it," Dr. Anthony Fauci, director of the National Institute of Allergy and Infectious Diseases, told CNN's Erin Burnett on Friday.

Gottlieb wrote that mask mandates have become divisive only because of the way some politicians and political commentators have framed the issue.

"States should be able to choose how to enforce a mandate, but the goal should be to make masks a social and cultural norm, not a political statement," he wrote.

State leaders back on guard

More than two-thirds of states have reported an increase in cases over the last week, and no state is currently reporting above a 10% improvement. As cases climb, state leaders are pushing for prevention among their residents.

In El Paso County, Texas, where surging cases have pushed all hospitals and intensive care units to capacity, officials have implemented a curfew from 10 p.m. to 5 a.m. for the next two weeks, El Paso County Judge Ricardo Samaniego said during a Sunday night virtual press conference.

"The purpose of the curfew is to limit mobility in the community," Samaniego said.

Even in Arkansas, where new cases dipped to 797 on Sunday after days of more than 1,000 daily cases, Gov. Asa Hutchinson warned residents not to get too hopeful.

"Our cases decreased yesterday, as is typically the trend over the weekend," Hutchinson said in a tweet on Sunday. "While we may want to relax, it's critical that we continue to be disciplined as cases continue to rise nationally."

A vaccine likely won't protect against the virus until 2021

Researchers may be racing to develop a vaccine, but Gottlieb said it is unrealistic to think one will be ready for distribution in time for this surge.

"This vaccine is not going to affect the contours of what we're going to go through, which is going to play out in the next two or three months," he said.

Even if a vaccine becomes available this year and goes to the first group of patients, likely the elderly and health care workers, they won't have protective immunity until some point in 2021, Gottlieb pointed out.

"We will know whether a vaccine is safe and effective by the end of November, beginning of December," Fauci told the BBC on Sunday. "The amount of doses that will be available in December will not certainly be enough to vaccinate everybody -- you'll have to wait several months into 2021."

Speaking to the BBC's Andrew Marr show, Fauci added that the vaccination of a "substantial proportion of the population" such that there can be a "significant impact on the dynamics of the outbreak" would likely not be possible until the second or third quarter of 2021.

"What I do foresee is that with a successful vaccine and the continuation of some form of public health measures, as we go and progress through the months of 2021, getting towards the third and fourth quarter, we will see a considerable approach towards some form of normality," Fauci told Marr.

National Institutes of Health Director Dr. Francis Collins said Friday that while he's "cautiously optimistic" about the US having a vaccine authorized by the end of the year, he said it "might not happen and it might take longer."