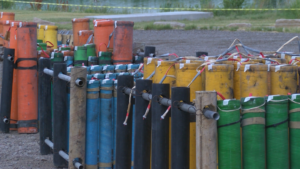 GREAT FALLS – The four men who were convicted in 2017 for stealing thousands of dollars of fireworks in Great Falls have been sentenced.

The defendants each pleaded guilty earlier this year to crimes associated with the theft of $18,000 worth of commercial fireworks from a trailer in Great Falls. The fireworks were intended for the City of Great Falls’ Fourth of July display.

The Department of Justice reported that on July 3, 2017, a man called the Great Falls Police Department to report that someone had stolen the fireworks. The man had locked the trailer but when he arrived at the trailer during the evening of July 3, he noticed someone had cut the lock.

On June 12, 2019 Judge Brian M. Morris sentenced Kris Harding, 48, of Sun Prairie, to three years of probation and to 200 hours of community service. Harding pleaded guilty to being a prohibited person in possession of explosives. Harding was prohibited from possessing explosives because of a prior felony conviction.

On July 4, 2017, law enforcement began receiving information about the fireworks theft and that Harding may have been involved, the prosecution said. A witness told investigators he helped Harding and Outten, who was Harding’s roommate, unload about a dozen totes of fireworks from Harding’s pickup truck into their living room in Sun Prairie, according to a press release.

Law enforcement found fireworks in Harding’s pickup and a label on the explosives identified that they were from a Helena company that had supplied the fireworks for the Fourth of July show.

On July 5, 2017, agents received additional information that Emineth was in possession of stolen fireworks. The agents learned that Emineth had arrived at a home in Great Falls on the evening of July 2, 2017 and unloaded plastic tubes that contained fireworks and detonator devices, according to a press release. Officers went to the home and found Emineth, who told them Outten had been trying to rid of fireworks and had called him to inform him that police had searched the Sun Prairie home.

In addition, a man went to the Great Falls Police Department on July 11, 2017 and wanted to turn in stolen fireworks. The man said Emineth had come to his home mid-day on July 2, 2017 and wanted to store bags in his shed. The man told officers that Emineth placed five bags in the shed and left. The man then learned about the stolen fireworks, went to the shed and found the fireworks along with yellow plastic control boxes. The man took the bags, which contained fireworks with the same label as the Helena company’s, to the police station.

And on July 12, 2017, another man contacted the police and said that co-defendant Marshall had provided him with some of the stolen fireworks and that he wanted to return them to the police department.

The man dropped off the fireworks and agents found that they too, contained the Helena company’s label. The man told police that Marshall asked him if he wanted to buy fireworks. The man asked if the explosives were the stolen fireworks mentioned on the news, and Marshall said that they were. Marshall told the man he had paid $100 for the fireworks and showed him the explosives. Marshall admitted to officers that Emineth had approached him about the stolen fireworks and had placed them in the car he was driving but that they did not exchange money, according to a press release.