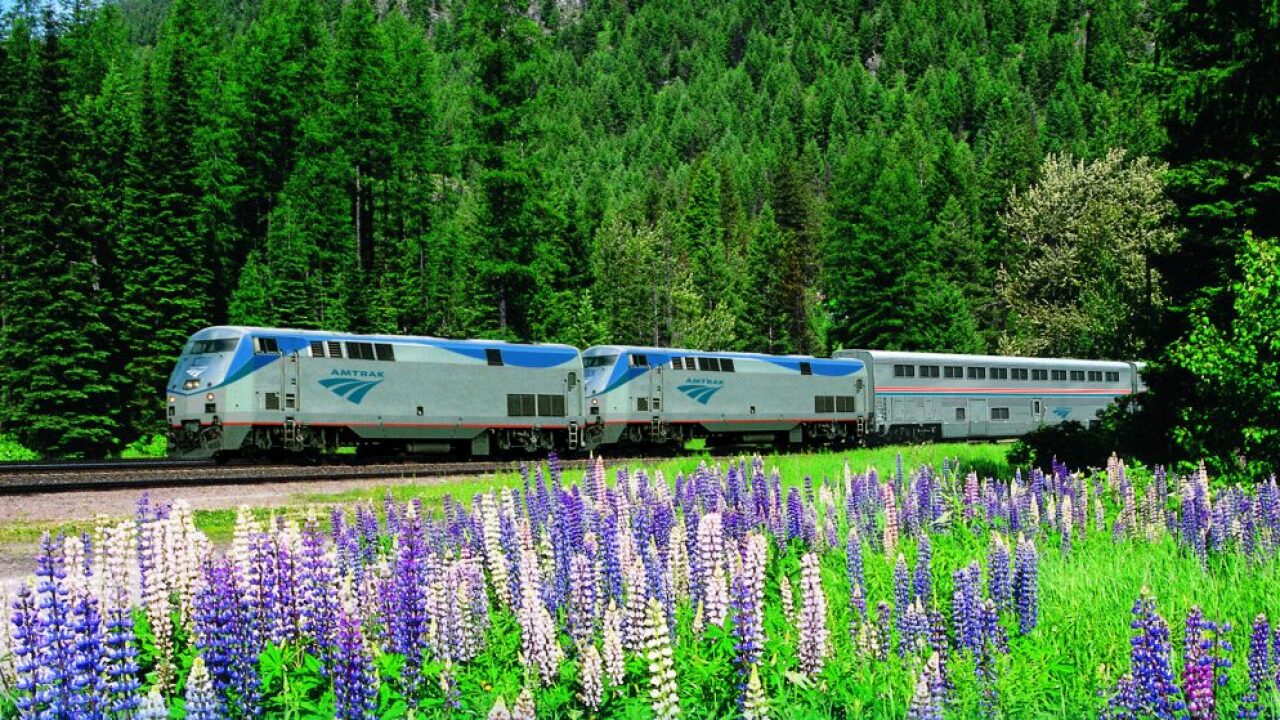 Amtrak media photo
An Amtrak train passes through the Pacific Northwest. Advocates believe now’s the time to lay the foundation for the restoration of the North Coast Hiawatha Route, which would pass through Montana’s most populous cities on its run between Fargo and Spokane.

In the wake of climate change, struggling small towns and a general shift in how people move from point to point, proponents of passenger rail service see an economic opportunity in restoring the North Coast Hiawatha Route.

“I can’t think of an issue that has generated as much positive feedback as this particular one,” Missoula County Commissioner Dave Strohmaier told the Missoula Current. “There seems to be a fair amount of populist energy surrounding this. It’s partially attributable to folks recognizing that our transportation options are somewhat limited in Montana, but also people really value a vision that’s larger than what we’re accustomed to.”

The route would run from Chicago to Fargo and continue west through a number of Montana cities, including Miles City, Billings, Livingston, Bozeman, Helena, Missoula and Paradise. It would then arrive in Spokane, where passengers could choose between Portland and Seattle.

Commissioners in October expressed interest in restoring the route through Missoula and other points east and west, saying the initial infrastructure costs could be recovered in economic and other public benefits.

They’re not alone in their vision, and data cited by the national Rail Passengers Association may be on their side. At the state’s first Montana Passenger Rail Summit, held last year in Billings, the association said now’s the time to lay the groundwork to restore the North Coast Hiawatha Route.

Jim Mathews, president and CEO of the Rail Passengers Association, said several southern states are close to launching the new Mobile to New Orleans Route, which is expected to return an estimated $170.7 million to local economies every year in exchange for an operating investment of around $6 million.

Strohmaier said Missoula County is compiling its own figures, which it will provide to the Rail Passengers Association ahead of a second rail summit scheduled for Missoula this spring.

“The conversation has always been focused on what it’s going to cost in way of rail infrastructure, the trains themselves and the stations,” Strohmaier said. “Not enough emphasis has been placed on the economic benefits of reestablished services.”

Over the years, the Missoula City Council, along with other cities along the southern route, have passed resolutions directing the state’s congressional delegation to support the restoration of passenger rail service.

Advocates have also made several tries at the state Legislature, not to seek funding but rather to ask the governing body to support the idea. While there was no fiscal attachment, the Legislature has refused to support it.

“That failed every single time with the exception of this last legislative session when Andrea Olsen carried a study bill to look at passenger transportation in Montana,” Strohmaier said. “That actually passed, but the interim committee a few months ago torpedoed that study, using some of the same tired arguments. The Legislature has proven to be utterly ineffectual at having any kind of vision.”

While Rep. Olsen, D-Missoula, works to sway the committee, Strohmaier is taking a new approach to drum up support elsewhere and establish a statewide rail authority. That could be established by cooperating counties and doesn’t require legislative involvement.

“There are discrete things counties could be well suited for, like the stations that need to be recreated along the route,” Strohmaier said. “They could also establish a rail authority. As a governing body in its own right, it could receive grant funding.”

Missoula County recently chased and received a $13 million federal BUILD grant for infrastructure needs west of Reserve Street. In theory, Strohmaier said, a rail authority could do the same thing.

While the political wheels turn, Strohmaier and rail advocates will continue planning for the spring summit and search for parallel models of rail authorities. They’re also preparing an economic impact analysis.

The Empire Builder across Montana’s rural Hi-Line reaps $37 million annually from the passenger service. In Cut Bank alone, population 2,800, the service brings nearly $400,000 in value to the community.

The economic benefits along Montana’s more populated Hiawatha route could be greater. The route is home to the state’s largest cities and more than half of its population.

“At the state and national level, there’s a tendency not to think big,” Strohmaier said. “I think we’ve either forgotten or lost the ability to have grander visions of what we can do, either individually or collectively. This is a classic example.”