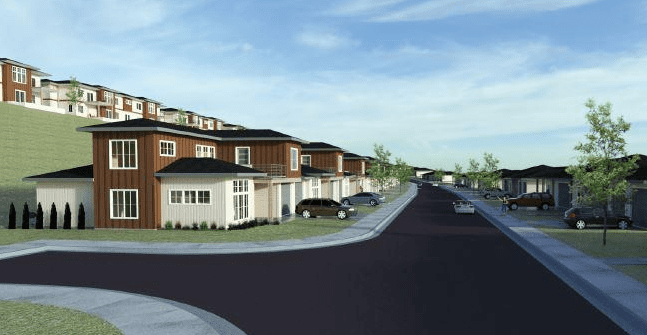 On Wednesday, the council’s Land Use and Planning Committee struggled with how much information they need before deciding whether to approve the proposed Hillview Crossing townhome development.

The subdivision would see construction of 68 townhomes along two curving dead-end streets north of Hillview Way. The undeveloped land sits on a hill, and 2 of the 25.6 acres have a slope exceeding 25 degrees so building can’t occur there. Other portions would be graded prior to building.

But it’s the slope that presents a problem when it comes to stormwater.

An extreme storm in 1997 caused flooding in the adjacent Wapikiya Park and surrounding neighborhood, so Councilwoman Julie Armstrong is concerned about stormwater runoff from the new development.

City engineer Troy Monroe said the developer, Territorial Landworks, was told that, in a similar flood event, the development would have to be able to hold back up to 17,000 cubic feet of water so it doesn’t overload the city’s capacity and damage the neighborhood below.

That’s mainly why council members John DiBari and Stacie Anderson want to see a completed stormwater plan before giving committee approval to the development. They’re also concerned about storage of soil while the site is smoothed off for construction.

There’s also uncertainty about what to do about the existing geotechnical plan, which expires in 2020. Plans are supposed to be renewed every five years.

DiBari said the project wouldn’t be complete by the time the plan expires in December 2020. So should a new geotechnical plan be written, and would it be best to incorporate the stormwater plan before the committee grants a conditional use permit?

“The whole review of this has happened in lots of small pieces, and I’m trying to figure out a way that when we’re done with this discussion that there’s a clear path forward. The clearest path forward is to have all the information available to us at the time of decision, so that we address the concerns of staff, we address the concerns of folks in the public, we address our own concerns, and the applicant can put his best step forward in terms of having us make a decision,” DiBari said.

Jason Rice of Territorial Landworks pushed back, arguing that a new geotechnical report wasn’t necessary because any changes to the original 2015 report were small. The report’s author, SK Geotechnical, is a busy company, so even requesting an updated memo would take months, Rice said.

Plus, the public process appears to be adding more requirements, Rice said, such as the city’s consideration of widening roads to 35 feet for parking and plowing. In addition, the streets are too long, so a pedestrian access would probably be needed to connect the midpoint of the streets.

If Territorial Landworks had proposed 34 condominiums instead of a townhome development, it wouldn’t have to go through a public process, Rice said.

“This is a conditional use permit. What conditions can you put on this project that will ensure that it will move forward fine?” Rice said. “We have favorable cost of construction this year. What’s this do to project affordability? You’re pushing the timeframe out. The 35-foot thing? If you guys decide that, that’s a denial of the project flat out.”

Some council members said they could approve the project with less information, but some worried about the city’s liability should problems arise after the development goes in.

Monroe said he preferred to have more information, but said that could make the project less feasible. He mentioned a hillside development in Boise, Idaho, that failed and the city was recently found responsible.

At next week’s meeting, council members asked staff members to discuss the kinds of decisions the city could make and how the project would play out under the different scenarios.