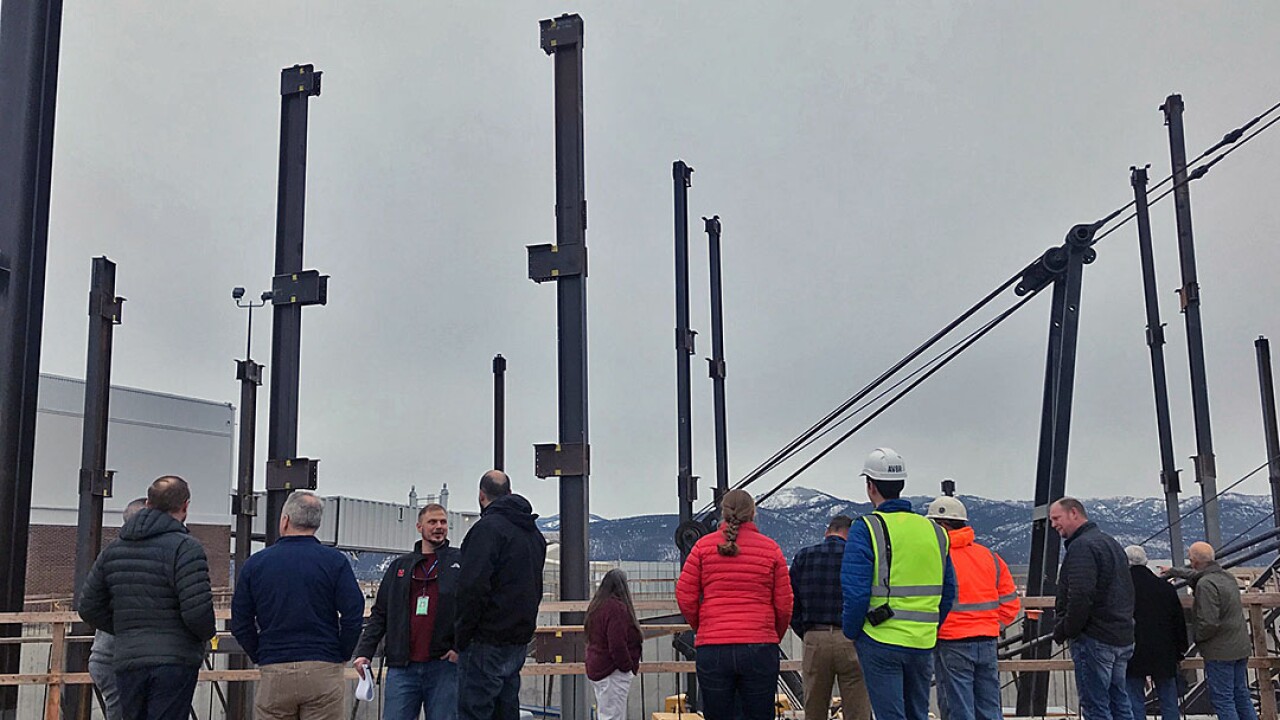 Martin Kidston/Missoula Current
Architects, engineers and members of the Missoula County Airport Authority tour the construction progress at the new south concourse on Friday, Jan. 13, 2020. The facility is slated to open in January 2022.<br/>

MISSOULA — All are systems are go at Missoula International Airport, where the steel frame for the new passenger terminal has risen from a foundation now months in the making.

At their first meeting of the year, members of the Missoula County Airport Authority awarded two significant bids for the project’s next phase, including $36 million for vertical construction of the south concourse and a separate $1.7 million task order to oversee the work.

“We have an incredibly good team with our design team and our contractor,” said airport director Cris Jensen. “If you had told me it was going to go this smooth prior to the process, I’d say no way possible.”

The airport opened construction bids in November, and the figures left officials feeling good about the project’s $68 million budget. But in December, the airport opted to delay the bid awards , saying it needed more time to fully crunch the figures.

“We were still vetting the numbers and wanted a little extra time to go through this,” Jensen said. “It’s a big deal and big decision, and we wanted to make sure we did our due diligence. We’re feeling pretty good with our plan now, and with our numbers.”

The $36 million bid to Martel Construction includes the terminal’s shell, along with plumbing and mechanical. It also covers electric, communications and security.

“The follow up to this will be the jet bridges and baggage handling component of this project,” said Tim Damrow, project manager at the airport. “There are some leads on that, so that’ll be a subsequent package. But everyone is feeling a lot more confident now that construction is out of the dirt and we’re moving toward more of a vertical phase.”

Following deconstruction, the foundation for the new south concourse took several months to prepare. With the footings in place, crews have begun vertical construction. (Missoula International Airport photo)When the airport initially unveiled its plans, the project carried an estimate of $84 million price tag. But through value engineering and strategic bidding, it has reduced the cost to $68 million and has retained around 10%, or $6 million in contingency costs.

Project architect Chris Martison of A&E in Missoula said the budget is tight but workable.

“We were tasked with pushing $5 or $6 million out of a number that was presented (earlier) by Martel,” said Martison. “We spent the better part of a couple days and weeks working together collectively to find those opportunities for additional savings. There’s no excess spending in this budget. We feel real comfortable with the number and the project.”

The south concourse, scheduled to open around this time in 2022, will include five passenger gates with more room for travelers. It will also include new security, an observation point and a number of amenities, including food and beverage for checked passengers.

“We’re feeling pretty good with our plan now, and our numbers,” said Jensen. “There wasn’t an element of the building that we didn’t at least consider to make sure it was appropriate. It was very thorough process.”

The south concourse represents the first phase of the terminal project. Airport officials are already looking toward the construction of the east concourse, which carries an estimated cost of $26 million.