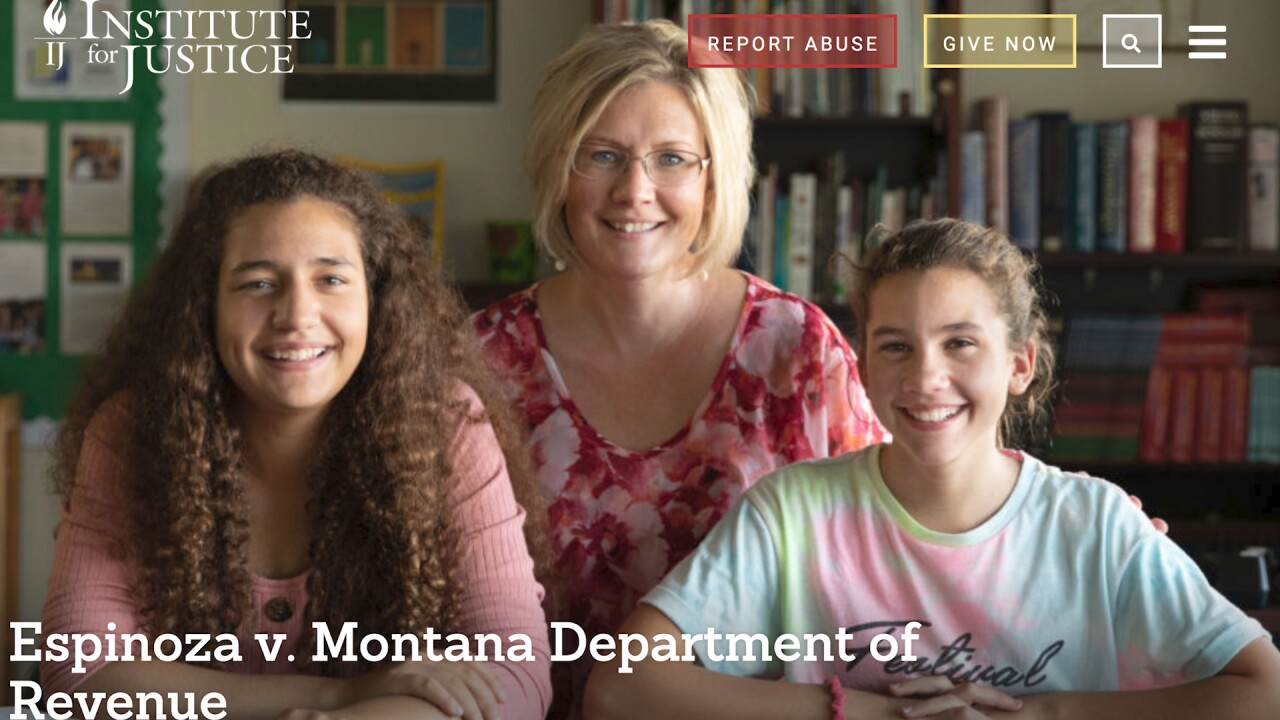 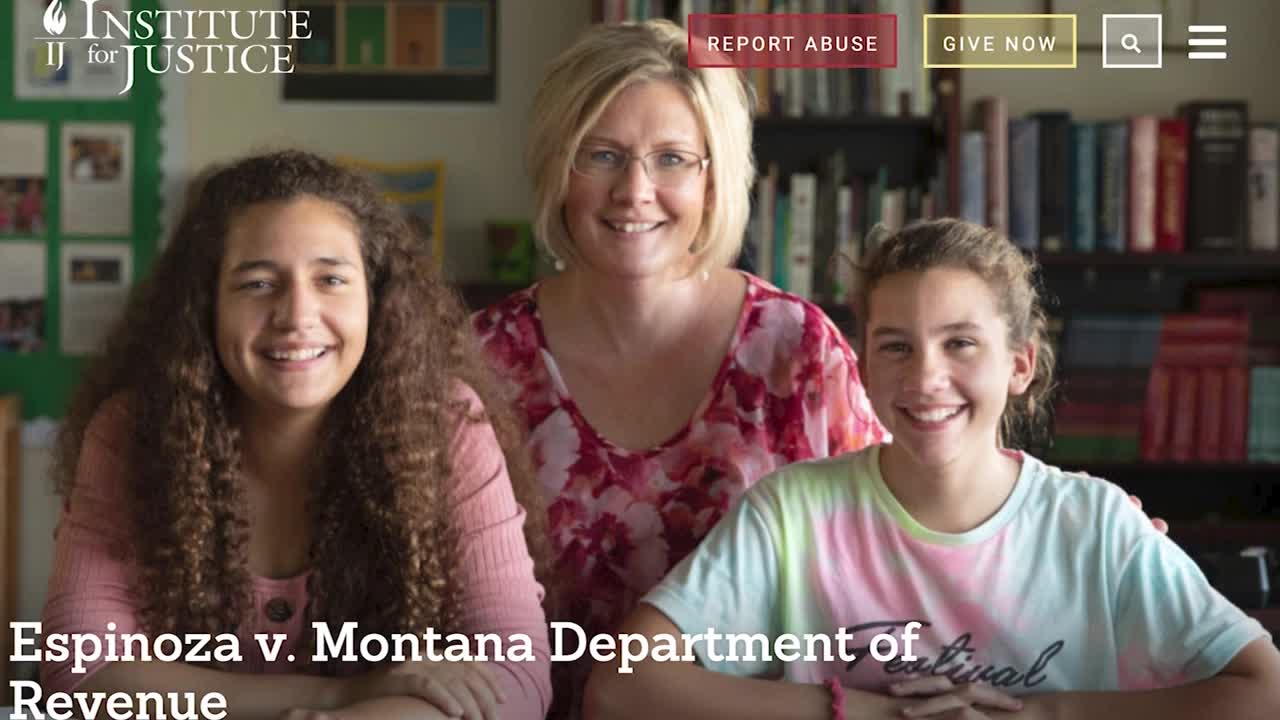 A Montana case that’s become a politically charged battle over public aid to church-affiliated schools is before the U.S. Supreme Court Wednesday, as school-choice advocates ask the court to strike down Montana’s constitutional ban on the aid.

The case pits a trio of Kalispell parents whose children go to Stillwater Christian School against Montana and its constitution – but the decision clearly has national ramifications.

More than 50 groups and individuals have filed “friend of the court” briefs, advocating for one side or the other.

Two-thirds of those briefs are from supporters of private religious schools or “school choice” – a euphemism for forms of public assistance or tax credits for families who send their kids to private schools.

They’re asking the Supreme Court to strike down not only Montana’s ban on public aid to churches or “sectarian” schools, but also similar bans in other state constitutions.

“Today, we face the … question: Can state constitutions prohibit the participating of religious schools in school-choice programs?” says Richard Komer, senior attorney for the Institute for Justice, which is representing the Kalispell parents. “What’s at stake is parents’ ability to choose religious schools from among the universe of private schools.”

Among the state's opponents in the case are two of its own members of Congress: Rep. Greg Gianforte and Sen. Steve Daines, both Republicans, who filed a brief with the U.S. Supreme Court in support of the Kalispell parents. Gianforte told MTN News that he supports parents' rights to choose how their children are educated.

The case stems from a 2015 state income-tax credit meant to aid scholarships for children in private schools.

In 2018, the Montana Supreme Court struck the tax credit, saying it violated the state’s constitutional ban on public aid to any churches, because the scholarships could go to children attending church-affiliated schools.

The Kalispell parents appealed that decision to the U.S. Supreme Court, saying the ban violates the U.S. Constitution’s guarantee of free exercise of religion.

They’re asking the court to strike down Montana’s constitutional clause banning the aid and reinstate the tax credit.

Montana, and other states with similar constitutional provisions, agree that the case is about religious freedom.

But they’re arguing that their bans on public aid to churches is valid, because it prevents the state from favoring any one religion – and, works to ensure that state education funding is for public, rather than private, schools.

“The way to protect religious liberty … is to keep a separation,” says Raph Graybill, chief counsel for Gov. Steve Bullock. “If you want to go to private school, you want to go to a religious school, that’s a choice we respect. But it’s got to be private monies.”

The Montana case, Espinoza v. the Montana Department of Revenue, is one of the most-watched cases of the Supreme Court’s current term.

The U.S. Justice Department, under the Trump administration, is siding with the school-choice advocates and will argue before the court Wednesday that constitutional bans on aid to religious schools should be abolished.

“Montana’s no-aid provision contradicts those principles (of free exercise of religion) because it discriminates on the basis of religious status, by disqualifying `sectarian’ private schools but not secular private schools, from receiving public funding,” the department said in its brief.

But more than a dozen parties have filed briefs supporting Montana. They include other states, groups promoting the separation of church and state, and some religious organizations themselves, such as the Montana Association of Rabbis.

The rabbis’ association says all private religious schools in Montana are Christian, and therefore the tax credit essentially forces all taxpayers to support one brand of religion.

“The inevitable effect of Montana’s program would be either to exclude non-Christians from participation in that program, denying them a valuable state benefit, or to force those persons to subsidize an avowedly religious Christian education,” its brief said.

The Montana Legislature enacted the $150 income-tax credit in 2015, for those donating to nonprofit scholarship organizations, which in turn offer scholarships to Montana children attending private schools. Gov. Bullock, a Democrat, let it become law without his signature.

But before the program began, the state Revenue Department issued a rule saying no scholarships could go to children attending religious schools.

Kendra Espinoza, whose two daughters attend Stillwater Christian and who wanted to use the scholarships to help pay tuition, joined with two other Kalispell parents to sue to invalidate the rule.

A state district judge ruled in their favor, saying the tax credit was not a state “appropriation” or public aid for religious schools, and therefore not forbidden by the state constitution.

The state appealed that ruling to the Montana Supreme Court, which disagreed. It not only said that the credit is state aid, but then went a step further and struck down the entire tax credit, because it could be used to aid religious schools.

The Kalispell parents appealed that ruling to the U.S. Supreme Court, which accepted the case last year.

In statements released by the Institute for Justice, Espinoza said that, as a single mother, she has struggled to pay tuition for her two daughters to attend Stillwater Christian School, and that she looked forward to having the tax-credit-funded scholarships help.

When her children were forbidden from getting those scholarships, “I felt it was discriminatory, unfair, simply because they went to a religious school,” she said.

Supporters of the appeal have argued that the “no-aid” clauses in Montana’s and other states’ constitution are vestiges of anti-Catholic bigotry from the late 1800s, inserted into constitutions in the wake of a wave of Catholic immigration to America.

Graybill, however, noted that Montana’s constitution was rewritten in 1972, and that the 1972 constitutional convention delegates who maintained the clause said its main message is that public education funds must support public schools.

“If that protection for public schools is gone, which is what the (parents) are asking the Supreme Court to do in this case, there are very few roadblocks left that would prevent a future legislature from taking that public-school funding formula and allocating it directly to private schools,” he told MTN News.

Supporters of the appeal insist they are not trying to undermine public schools.

“One thing I’d like folks to understand is that we’re not trying to take anything away from the public schools,” said Jeri Anderson, another of the Kalispell parents who brought the lawsuit. “We just want to have the option to send our child to the school that best suits them and their needs academically, socially and spiritually.”

State Rep. Bill Mercer, R-Billings, who helped represent the parents in state court, said fears that a decision for the parents would lead to extensive public aid for private schools is overblown.

“Could the tax credit be increased? A future Legislature could do that; that is true,” he told MTN News. “But we all know that in the state of Montana, institutions delivering K-through-12 education are central, important.”

Mercer also noted that when the Montana Supreme Court wiped out the tax-credit program, it also got rid of scholarship aid for students who went to non-religious private schools.