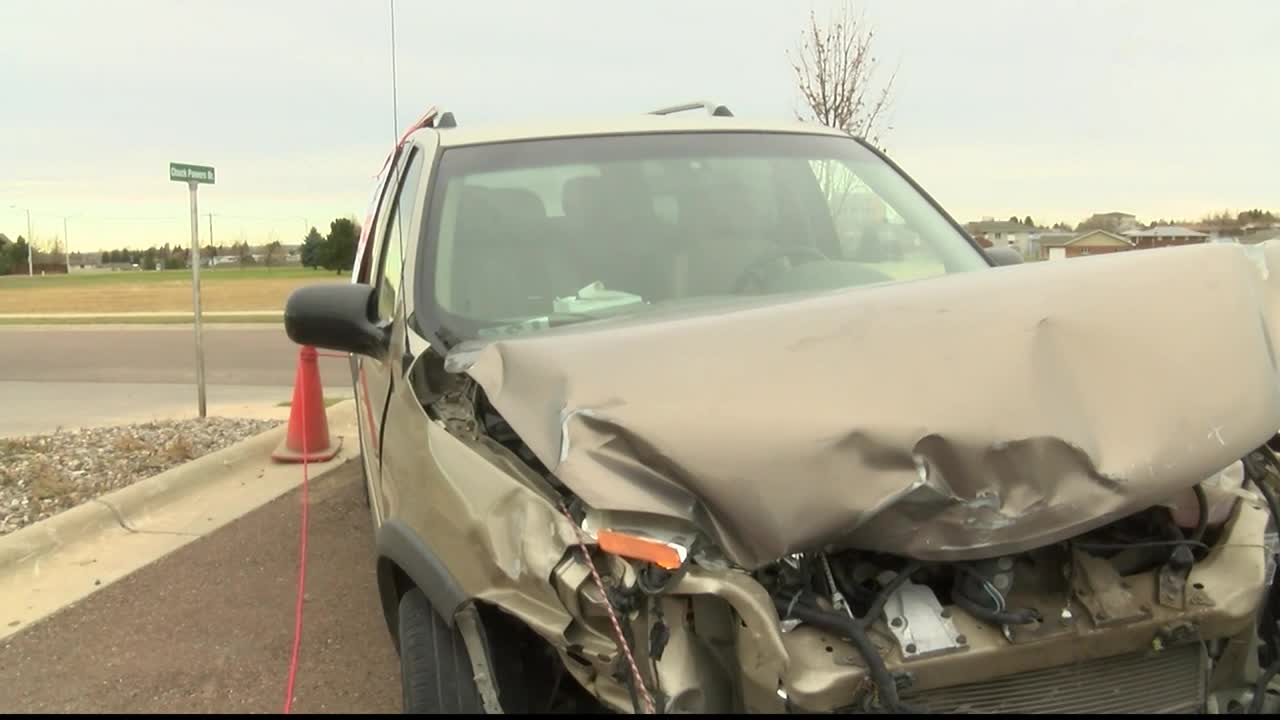 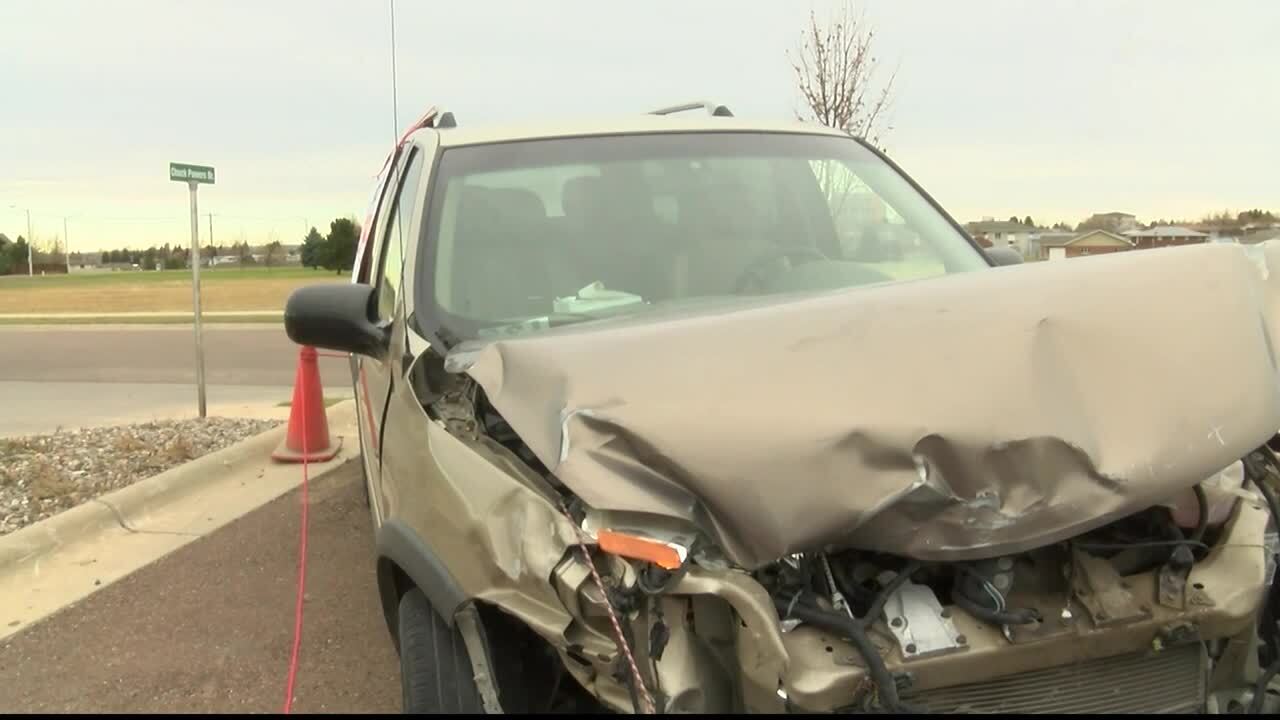 The is National Teen Driver Safety Week, and according to the Cascade City-County Health Department, crashes are the leading cause of death for teens.

A crashed car is currently on display in the parking lot at Great Falls Central Catholic High School to raise awareness for students about the importance of safe driving.

Student Rocky Vance understands the risks of driving, “the possibility of being in an accident is real and it’s very possible you might be in a car accident.”

Principal Angel Turoski wanted the car to be in the right place to get the message across.

Turoski also had a very recent reminder about driving safety, “I had a kid just a few weeks ago who hit a deer in the morning on his way to school.”

Student Hektor Pitstick says he wants his friends and peers to be cautious," just know what you’re doing and know the consequences like we have seen out in the parking lot."

A press release from CCHD says that motor vehicle crashes are the leading cause of teen deaths, but we can easily reduce teens’ risk by encouraging them to buckle up.

The good news is that 75% of teens already wear a seatbelt every time they drive! 58% of the time, however, when a teen dies in a motor vehicle accident, they were not wearing a seat belt.

When asked why they don’t buckle up before driving, here are the top reasons teens give for failing to wear a seat belt:

One teen, Presley Melton, recounts why she now wears a seat belt. In 2006, Presley (age 15) and her best friend, Lindsay (17), were taking a short trip “just around the corner” and decided to let buckling up slide. Lindsay was speeding and lost control, and both girls were thrown from the car—neither was wearing a seatbelt.

Presley sustained multiple fractures to her face and body, remained in a coma for over a month after the crash, and still battles a severe brain injury; Lindsay died at the scene of the wreck. “Every time I think of Lindsay, I wish we had taken a moment to buckle up.”

If you have teenagers or younger children, understand the importance of buckling up for every ride, every time! Teens learn best from example. You can teach them how valuable they are by modeling good driving habits anytime and anywhere you drive with them. Make sure you put your cell phone away and buckle your seatbelt before you even start the car.

Click here for more tips on modeling safe driving. More information about Buckle Up Montana can be found by calling the CCHD at (406) 454-6950.

More information from the U.S. Department of Transportation :

· Motor vehicle crashes are the leading cause of death for teens (15-18 years old) in the United States, ahead of all other types of injury, disease, or violence.
· In 2017, there were 2,247 people killed in crashes involving a teen driver (15-18 years old), of which 755 deaths were the teen driver — a 3% decrease from 2016.
· Parents can be the biggest influencers on teens’ choices behind the wheel if they take the time to talk with their teens about some of the biggest driving risks, including:

Impaired Driving: All teens are too young to legally buy, possess, or consume alcohol. However, nationally in 2017, of teen drivers involved in fatal crashes, 15% had alcohol in their system. But alcohol isn’t the only substance that can keep your teen from driving safely: In 2017, 6.5% of adolescents 12 to 17 years old were marijuana users. Like other drugs, marijuana affects a driver’s ability to react to their surroundings. Driving is a complex task, and marijuana slows reaction time, affecting a driver’s ability to drive safely. Remind your teen that driving under the influence of any impairing substance — including illicit or prescription drugs, or over-the-counter medication — could have deadly consequences. It is critical that teen drivers understand why they shouldn’t drive impaired, that they will face strict penalties and may lose their license if they are caught driving impaired, and that they will face additional consequences for breaking the rules they agreed to follow when they started driving.

Seat Belts: Wearing a seat belt is one of the simplest ways for teens to stay safe in a vehicle. Yet too many teens aren’t buckling up. In fact, there were 539 passengers killed in passenger vehicles driven by teen drivers, and more than half (60%) of those passengers who died were NOT buckled up at the time of the fatal crash. Even more troubling, when the teen driver was unbuckled, 87% of the passengers killed were also

National Teen Driver Safety Week is October 20-26, 2019, and is a great opportunity for parents to sit down with their teen drivers and discuss the importance of driving safety. Whether teens are driving a car, truck, or SUV, and whether they’ve just earned their license or have had it for years, the rules stay the same, and they shouldn’t have the keys if they don’t know the rules. Parents, the greatest dangers for teen drivers — and the areas of focus for your conversation — are alcohol consumption, inconsistent or no seat belt use, distracted driving, speeding, and driving with passengers in the vehicle.

· Motor vehicle crashes are the leading cause of death for teens (15-18 years old) in the United States, ahead of all other types of injury, disease, or violence.
· In 2017, there were 2,247 people killed in crashes involving a teen driver (15-18 years old), of which 755 deaths were the teen driver — a 3% decrease from 2016.
· Parents can be the biggest influencers on teens’ choices behind the wheel if they take the time to talk with their teens about some of the biggest driving risks, including: