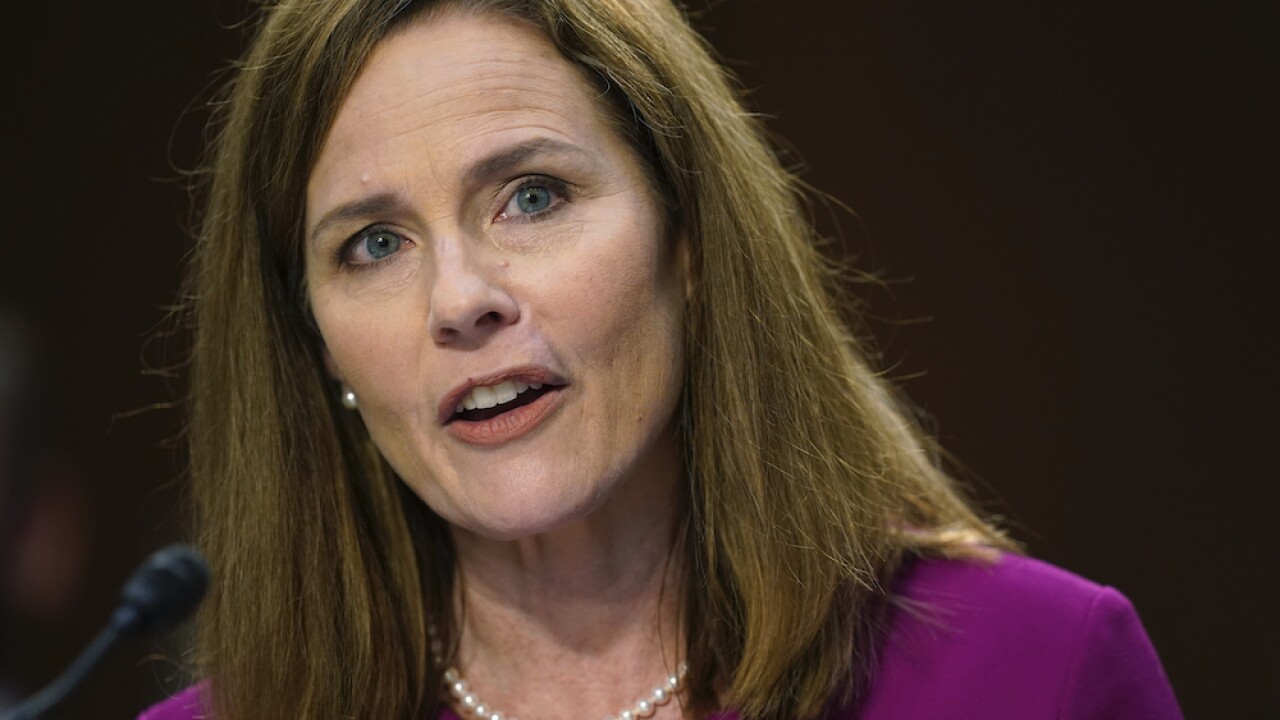 Copyright 2020 The Associated Press. All rights reserved.
Patrick Semansky/AP
Montana U.S. Sen. Steve Daines says Supreme Court nominee Amy Coney Barrett was part of an eight-judge panel that said the lawsuit challenging the Affordable Care Act is a "weak case." But, he didn't mention that this opinion was part of a non-binding mock trial.

HELENA — As Democrats accuse the GOP of installing a Supreme Court justice who will help void the Affordable Care Act, U.S. Sen. Steve Daines, R-Mont., said last weekend that’s a “scare tactic” – and that the ACA will not get overturned.

To back up his claim, Daines said the Trump administration’s U.S. Supreme Court nominee, Amy Coney Barrett, was part of an “eight judge panel” last month that unanimously decided the pending lawsuit to invalidate the ACA is a “weak case” and won’t succeed.

But what Daines didn’t mention is that this “panel” of judges was a mock trial exercise, which has no legal binding effect. It’s also not known what Barrett said or thought during the exercise, held at William and Mary College in early September.

Mock trials are meant to be educational, role-playing exercises. The Los Angeles Times, which first reported on the trial, said “few who engage in such sessions” would suggest that Barrett’s vote is indicative of how she’d rule on the actual case before the U.S. Supreme Court next month.

Barrett, a federal appeals court judge based in Chicago, has publicly criticized the 2012 U.S. Supreme Court opinion that upheld the ACA by a narrow margin.

Daines made his claim Saturday during a debate with his Democratic opponent, Gov. Steve Bullock – who had accused Daines of supporting the confirmation of a justice who will vote to throw out the ACA.

“I think (Barrett’s confirmation) has more to do with the case (the Supreme Court) is going to hear a week after the election,” Bullock said to Daines. “And that would be to strip away the protections of the ACA – something that you’ve been trying to do ever since we’ve sent you to Washington, D.C.”

The state of Texas and Republican attorneys general are behind the lawsuit attempting to throw out the ACA, on constitutional grounds. The Trump administration is supporting the suit and Daines also has said he supports it.

The high court is scheduled to hear the case Nov. 10. Senate Republicans have said they intend to vote before the election to confirm Barrett on the U.S. Supreme Court, creating a 6-3 conservative majority on the court.

Yet during Saturday’s debate, Daines flatly stated that “the ACA is not going to get overturned,” when asked whether he was concerned about certain rights that may be in jeopardy if Barrett is confirmed as a justice.