Voters in GOP-led states give themselves raise, increasing minimum wage

Voters in two Republican-led states gave themselves a raise on Election Day, approving ballot measures in Tuesday’s midterm elections that will boost pay for about 1 million workers.

Missouri voters approved a measure to gradually boost the state’s minimum wage from its current $7.85 per hour to $12 an hour by 2023. The raise will lift wages for about 677,000 workers, according an analysis from the National Employment Law Project.

The measures come as incomes for many low- and middle-income workers have been stagnating, while corporate profits and executive pay have been soaring. While Republican lawmakers typically argue against a higher minimum wage on the grounds it could make businesses less competitive, the issue is gaining support among voters, with a majority of both Republicans and Democrats saying they believe the federal baseline wage of $7.25 an hour should be higher.

Supporters of higher pay for low-wage workers called the ballot measures a victory that highlights a growing gulf between voters and lawmakers.

“When it comes to the minimum wage, the biggest gap isn’t between Republicans and Democrats; it’s between politicians who don’t want to raise the wage and the people they represent,” said Jonathan Schleifer, executive director of the Fairness Project, in an email to CBS MoneyWatch. The Fairness Project is an advocacy group that supported the measures.

The Missouri vote is notable partly because the minimum wage was at the center of a high-profile battle last year. In that case, city leaders in St. Louis and Kansas City had passed ordinances to boost local baseline wages, but Missouri’s Republican-led General Assembly issued a preemption law, which meant the cities had to obey the state law when it came to the minimum wage. In some cases, wage hikes were rescinded for low-wage employees.

The federal minimum wage hasn’t seen an increase since 2009, when it rose from $6.55 to $7.25 an hour. Yet costs for essentials such as health care and housing have surged since then, with inflation reducing its spending power by more than 12 percent, according to the Economic Policy Institute, a left-leaning think tank. 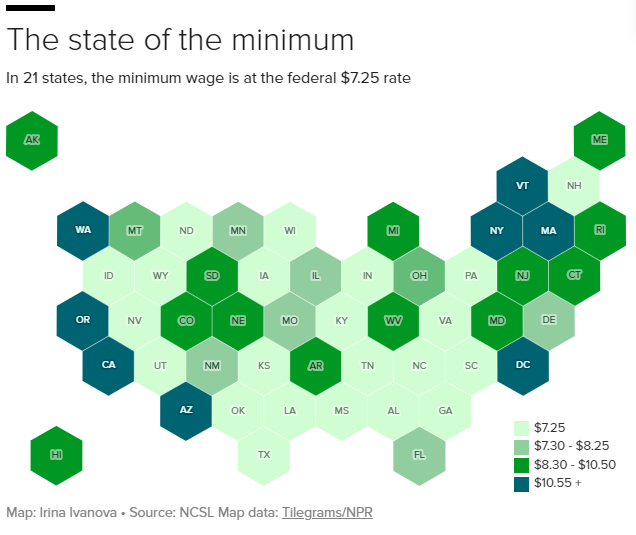 Because the federal minimum wage doesn’t appear likely to receive a boost under the Trump administration, state and municipal lawmakers are enacting local laws to push up the baseline pay rate. Currently, 29 states and Washington, D.C., have higher minimum wages than the federal rate, according to EPI. The bulk of those increases have come within the last four years, with 23 states pushing up their minimum wage laws since 2014.

On the heels of the success of the measures in Missouri and Arkansas, Louisiana Governor Jon Bel Edwards said it was time for his state to consider a similar move.