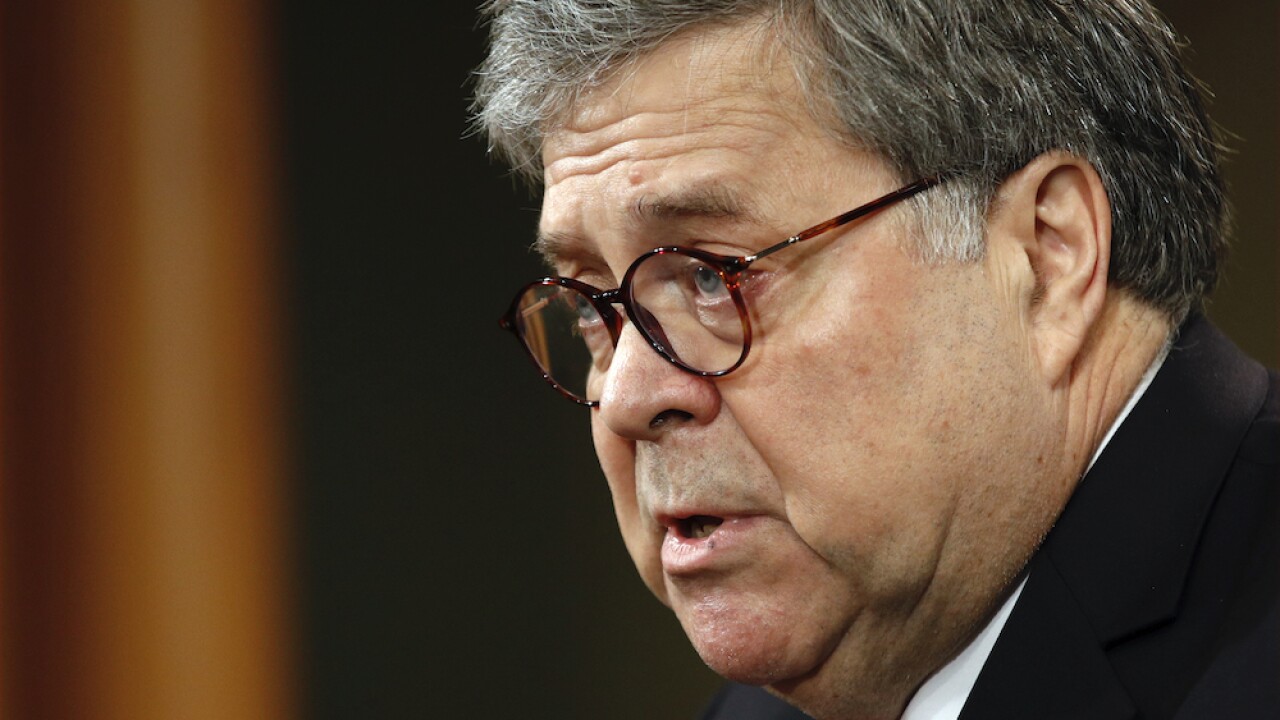 Copyright 2019 The Associated Press. All rights reserved.
Patrick Semansky/AP
Attorney General William Barr speaks about the release of a redacted version of special counsel Robert Mueller’s report during a news conference, Thursday, April 18, 2019, at the Department of Justice in Washington. (AP Photo/Patrick Semansky)

Attorney General Bill Barr is currently testifying in front of the House Judiciary Committee regarding alleged political actions within the Department of Justice.

Tuesday's hearing is part of a series of hearings in which Democrats on the committee are holding to investigate what they say has become a politicized department. But Barr is using his opening statements to as an opportunity to sound off on those claims.

In his opening statements, Barr referred to an investigation into the 2016 Trump campaign's ties to Russia as "bogus" and asserted that he acts independently of President Donald Trump and his administration.

He also addressed ongoing protests across the country and the Trump administration's use of federal agents to restore peace. Barr referred to protesters as "anarchists" and "violent rioters" have "hijacked" peaceful movements following the death of George Floyd.

Barr did refer to Floyd's death as "horrible" and added that the incident "understandably jarred the whole country and forced us to reflect on longstanding issues in our nation."

When pressed by Chairman Jerry Nadler, D-New York, on the deployment of federal agents to cities like Portland, Barr said that he's made it clear that he would like to "pick the cities" where agents are sent, "based on law enforcement need." Many of the agents that have been deployed are part of the Department of Homeland Security.

Later, Barr was pressed by Rep. Sheila Jackson Lee, D-Texas on the current state of policing in America. During the questioning he said he does not believe there is widespread systemic racism with law enforcement entities in the country. He also said he is against the removal of qualified immunity, a statute that protects law enforcement agents from prosecution in some use of force cases.

Democrats are expected to press Barr on his handling of the Mueller report and the Department's intervention in legal cases against two Trump allies: Roger Stone and Michael Flynn.

In Stone's case, the Department of Justice backtracked on an initial sentencing recommendation of between seven and nine years in prison for lying to Congress. The department later recommended a lesser sentence, prompting all DOJ lawyers assigned to Stone's case to resign. Trump later commuted Stone's sentence.

Democrats repeatedly pressed Barr on his Department's decision to rescind its initial sentencing recommendations as favoritism and cronyism. Barr defended the move by saying that he did not feel that Stone, a 67-year-old man with no prior convictions, deserved to go to prison for seven years.

In the Flynn case, the Department of Justice dropped charges against Trump's national security adviser for lying to the FBI earlier this year — three years after Flynn pleaded guilty to the charges and then later tried to withdraw his plea.

In early June, Barr was among a group of Trump administration officials who appeared in a photo in front of St. John's Episcopal Church in Washington with the president — a photo that required the forceful dispersal of thousands of peaceful protesters at Lafayette Park near the White House.

Tuesday's hearing was delayed for about an hour after committee chairman Jerry Nadler was involved in a car accident on his way to Capitol Hill. According to CNN and Politico, Nadler was not hurt but was late in reaching the Capitol.