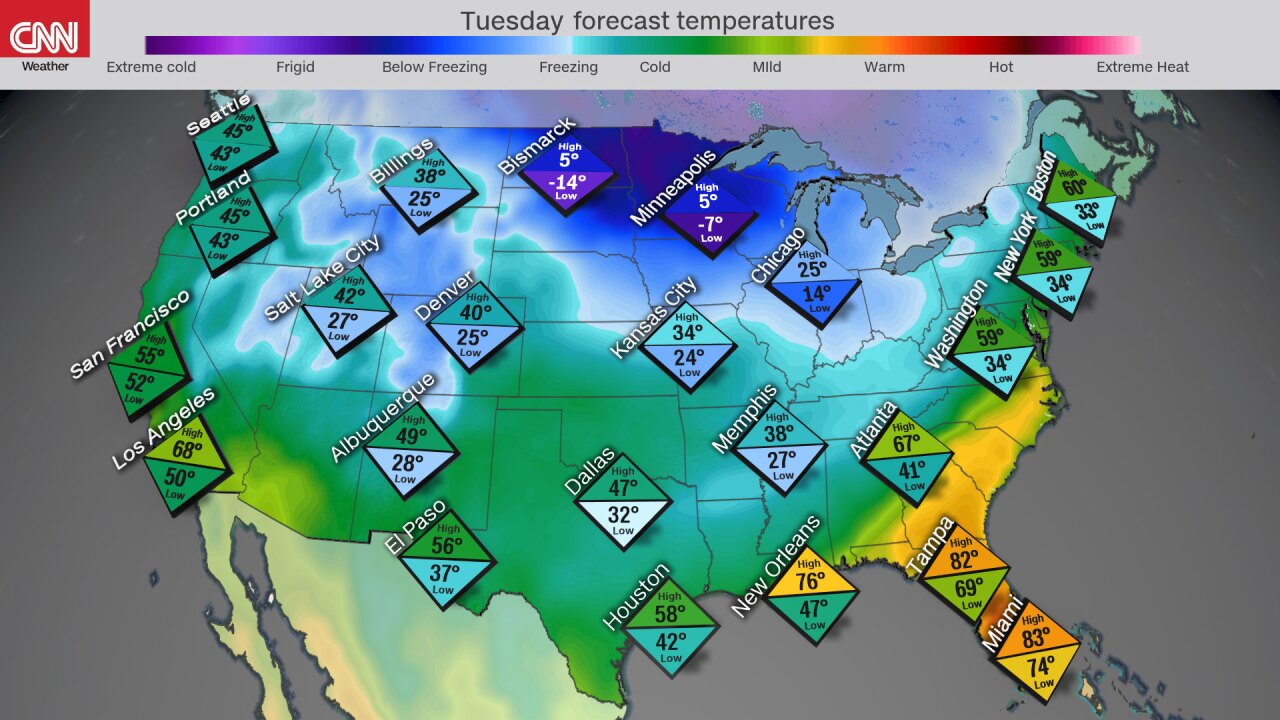 CNN Image
It&#39;s going to feel more like mid-January than early December this week as extreme cold temps move across the United States.

(CNN) -- It's going to feel more like mid-January than early December this week as extreme cold temps move across the United States.

About 65% of the country will experience below-freezing temperatures, according to CNN meteorologists Taylor Ward and Dave Hennen.

The system moving eastward has already hit parts of the Midwest, which saw heavy snow and limited visibility in places like Iowa, where about 50 cars were involved in a pileup Monday morning.

The crash took place around 11 a.m. CST on Interstate 80 westbound near Altoona, according to CNN affiliate WHO-TV. A snowsquall, or a sudden heavy snow fall, hit the region and caused slippery roads, the affiliate said. One person was seriously injured in the crash, said Sgt. Alex Dinkla with the Iowa State Patrol.

Bitter cold spills into the Midwest

The upper Midwest will see highs below zero Tuesday and even colder on Wednesday, Ward and Hennen said.

Chill advisories have already been issued for a portion of the Dakotas and Minnesota.

Over a foot of snow is possible in some areas of the region and in the northern Great Lakes.

"It will continue to be bitterly cold from eastern Montana to northern Michigan with widespread subzero lows and single digit highs," the National Weather Service said in its short range forecast.

The cold front will eventually bring "an arctic airmass" to the Mid-Atlantic and Northeast by midweek, NWS said.

A band of snow will develop 2,000 miles from Texas to Maine as a result of the arctic air combined with the frontal system moving across the eastern US, Ward and Hennen said.

Cities like like Dallas, Little Rock and Memphis could see light snow, with minor accumulations, the meteorologists said. About 1 to 3 inches are possible in Nashville, Washington and Philadelphia. The area from Boston to New York might have to deal with 2-4 inches.