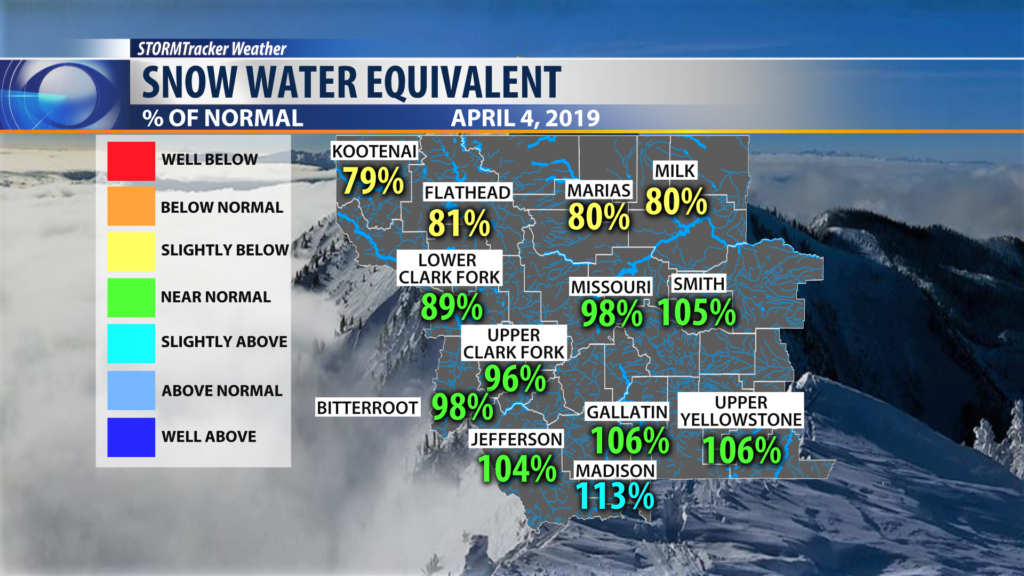 BOZEMAN – Major weather pattern changes in March marked a return to closer to seasonal temperatures during the latter half of the month for Montana, a welcome change after a brutally cold February.

It was also a dramatic change from the well above average February precipitation across the state to well below average for precipitation totals at mountain and valley locations.

Some river basins were able to keep snowpack totals at near or above average on April 1. Snowpack percentages in the mountains supplying river basins in the central part of the state are near normal, while southern basins reporting above normal totals on April 1.

“February was such a big month for snowfall in the central and southern basins that even though they experienced a record dry March, snowpack remains near or above normal for this date,” Zukiewicz said. “It may have saved winter and our spring and summer runoff.”

He cautioned that not all river basins have been so lucky this winter. “There are areas of concern in the state,” Zukiewicz said. “Snowpack in the northern mountain ranges remains below normal for April 1 and below normal March snowfall certainly didn’t help.”

“That means that the time for recovery in snowpack totals before runoff begins in these areas is running out as we progress further into spring, especially in northern basins west of the Divide,” Zukiewicz said. “While it’s still not impossible, it is less likely.”

April 1 snowpack totals give more clear insight into the snowmelt component of runoff across the state, and streamflow forecasts issued by the NRCS for the April 1 – July 31 period reflect the variation in snowpack and precipitation across the state this year.

Forecasts for river basins in the northern half of the state indicate below average streamflow volumes this spring and summer, while central and southern river basins have forecasts that are near to above average.

Spring mountain snowfall and valley precipitation plays an important role in the runoff for any given year, and this year will be no different.

“Snowpack across the state typically peaks during the month of April, meaning the next month will give us an idea of the total volume of water stored in the mountain snowpack ‘reservoir,’” Zukiewicz said. “That will tell us a lot about what we can expect relative to spring and summer runoff.”

“If this winter has taught me anything, it’s to expect the unexpected,” Zukiewicz said. “We’ll wait and see what April delivers.”

Monthly Water Supply Outlook Reports can be found at the here after the 5th business day of the month.