MISSOULA – Just when you thought you had heard of every possible type of smartphone app — a new Bee app is on the way.

The app developed by a company in Missoula has interesting roots — and should be helpful to beekeepers worldwide.

It’s an idea that was stemmed from a Department of Defense contract a decade ago, “that was to use bees to find landmines,” said University of Montana Professor David Firth.

He is part of a team from UM that formed the company Bee Alert Technology and they successfully trained the bees to do just that.

The idea is that US military camps around the world would have their own colony on hand. The question then became how would soldiers know if the bees were healthy? Thus the idea was born for the app known as Bee Health Guru.

“Originally the Bee Health Guru was designed to help soldiers who had never kept bees to be able to keep healthy bees,” Firth explained.

“And then we realized there’s hundreds of thousands of beekeepers around the world who can use a smartphone app to help them keep healthy bees,” he added.

It was the beginning of a five-year process, that included a lot of tedious work including recording a large number of sounds — undetectable to almost anyone outside of a very experienced beekeeper.

“We thought that if the bees had something different wrong with them, or if they had health issues, that they would make a very specific sound,” Firth told MTN News. 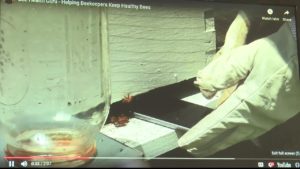 The entire collection of sonic buzzing has been captured in the phone’s artificial intelligence database and can be used by even the most novice beekeeper — including Firth, who started beekeeping just last summer.

“We had one of the colonies here that has something called American Foulbrood that is really difficult for a new beekeeper to detect,” Firth said. “And I was able to put the smartphone in the 18 different beehives here and I could tell exactly which one had American Foulbrood.”

The Bee Health Guru is expected to assist beekeepers in quickly identifying health problems, and take the necessary steps to maintain strong colonies.

Bee Alert Technology currently has a Bee Health Guru Kickstarter campaign ahead of the expected launch date of May 30.