MISSOULA – The latest update from the lightning-sparked Beeskove Fire burning in the Rattlesnake National Recreation Area shows that the blaze has grown slightly to 211 acres.

There are 175 people assigned to fight the fire that’s burning in rugged terrain about five miles northeast f the main Rattlesnake Trailhead. 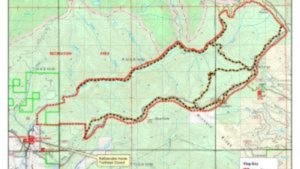 Fire managers say that the blaze is expected to continue to grow to the east and south with uphill runs.

Burning and rolling debris, due to the steep slopes, along with rugged terrain remains a challenge for firefighters.

Four Hotshot crews, two Type II crews, and six helicopters are working to contain the fire under a full suppression strategy.  There are currently 170 people assigned to the fire.

No structures are threatened at this time and at last check the blaze was still 0% contained.

“Firefighters continue to engage and suppress this fire when and where it is safe to do so and where they can be successful,” said Jennifer Hensiek, Missoula District Ranger. “Due to the location in the steep and rugged terrain, it is likely this will take a longer effort by crews and fire managers to establish containment.”