BILLINGS – The sun is out, and you’re enjoying your Montana day. But then a sneeze comes. And before you know it, another one sneaks out. You immediately know the culprit: it’s allergy season.

Across the country, thousands are being impacted by seasonal allergies, and now experts are pointing to climate change as a reason for the long-suffering.

“The issues that occur because of warming and greenhouse gases for allergies, is that it increases the carbon dioxide close to the earth,” said Dr. Kathleen Davis with Billings Clinic.

The Asthma and Allergy Foundation of America says warmer temperatures in the United States have caused pollen seasons to be nearly 27 days longer.

“The water vapor and the plants need that to grow so it stimulates them to grow more and so there’s more pollen,” said Davis.

Research done by Climate Central, a research group that reports the scientific impacts of climate change, said the prevalence of allergies among Americans has skyrocketed.

Lacey Anderson, a Billings mother said her family is impacted by allergies and asthma.

“A Longer pollinating season just means worse allergies for our house,” she said. 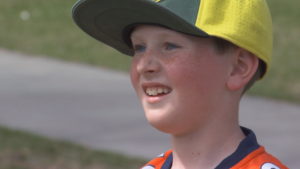 Her 8-year-old son Grant, suffers from allergies to grass.

“Itchy eyes, sneezing, we didn’t go outside before in the summer, we just stayed in,” said Anderson.

However, she said her son has now been given an allergy treatment she said was much needed to enjoy his time outdoors.  he takes a daily pill that will eventually end his seasonal allergies altogether, she said.

The Anderson family was outside Friday enjoying the sunshine at Pioneer Park. Lacey Anderson said her son Grant doesn’t have symptoms now at all.

In Montana, Davis credits our prolonged winter to a now-prolonged allergy season.

“As soon as you see the buds, which you’ve seen for a while now swell on the trees,” she said. “So the last three weeks, even though there is no pollen, people start having allergy symptoms.”

With buds on trees starting to bloom, the allergy season in Montana is a little later this year, meaning it will likely stay later, too.

However, Davis did say, each year is different when it comes to the arrival of allergy season. Some years it’s sooner; others it’s later.

If you are experiencing allergy symptoms, health officials encourage a conversation with your doctor to see which kind of treatment is the best.