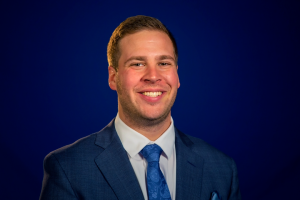 What is your job?
My job is to lead the sports department and anchor the weekly sportscasts while covering all things sports from high school to college level football, basketball, track and field and much more. I shoot, edit, and produce all the stories and sportscasts myself. Send me scores!

When did you start working here?
I began in January 2017 as a weekend reporter while I finished my last semester of college. I was then hired as a full-time reporter for KAJ/KPAX at the Kalispell bureau in July 2017 before I moved back to Missoula to join the sports department in March 2018.

Where else have you worked?
During college, I had a decorated career as a summer valet parker.

Where did you go to college?
Harvard of the west, the University of Montana, Go Griz!

Where did you grow up?
I’m a west coast kid at heart! I grew up in Walnut Creek, California, about 30 miles east of San Francisco. I spent my childhood playing baseball and water polo and hanging at the beach in the summers.

What are some of the biggest news stories you have covered or led coverage of?
Right off the bat in the summer of 2017 I covered the Gibralter Ridge and Caribou Fires near Eureka that each burned over 10,000 acres of land and claimed 10 homes.

Since coming back to my true passion, sports, I’ve gotten the opportunity to cover a number of teams and people that have inspired me day in and day out. One of the stories I’m most proud of is Marvin Camel’s World Title Belts being found after over 30 years. I had the honor of talking and connecting with Camel while also meeting his brother Ken and doing a story about him curbing suicide in the Mission Valley through boxing. That is just the one that currently sticks out to me, but there are far too many to list!

After college I also had a rare opportunity to travel to Japan for three weeks to cover the fallout of the Fukushima Daiichi Nuclear Disaster and how it’s affected those in its wake 6 years after.

What is your philosophy on news?
I believe, on a news and sports side, that we have a duty to tell the stories that you want to hear. Whether it’s a lighthearted or hard-hitting story, they all deserve the same effort and accuracy for our viewers.

What do you love about living here?
I could write an entire book on this area of Montana (might actually do that one day). I’ve been in love with Missoula since I stepped foot on campus back in 2013, but it’s not just Missoula. We cover a large area of Western Montana and I try to see as much of it as possible. From summer vacations with my family to the Flathead Valley and Glacier National Park to day trips down the Bitterroot Valley or to Philipsburg, I love it all! What also makes Montana such a special place is the people. From lifelong friends I met in college, to the random stranger that says hi to you on the river trail, you can tell people care and are happy to be here.