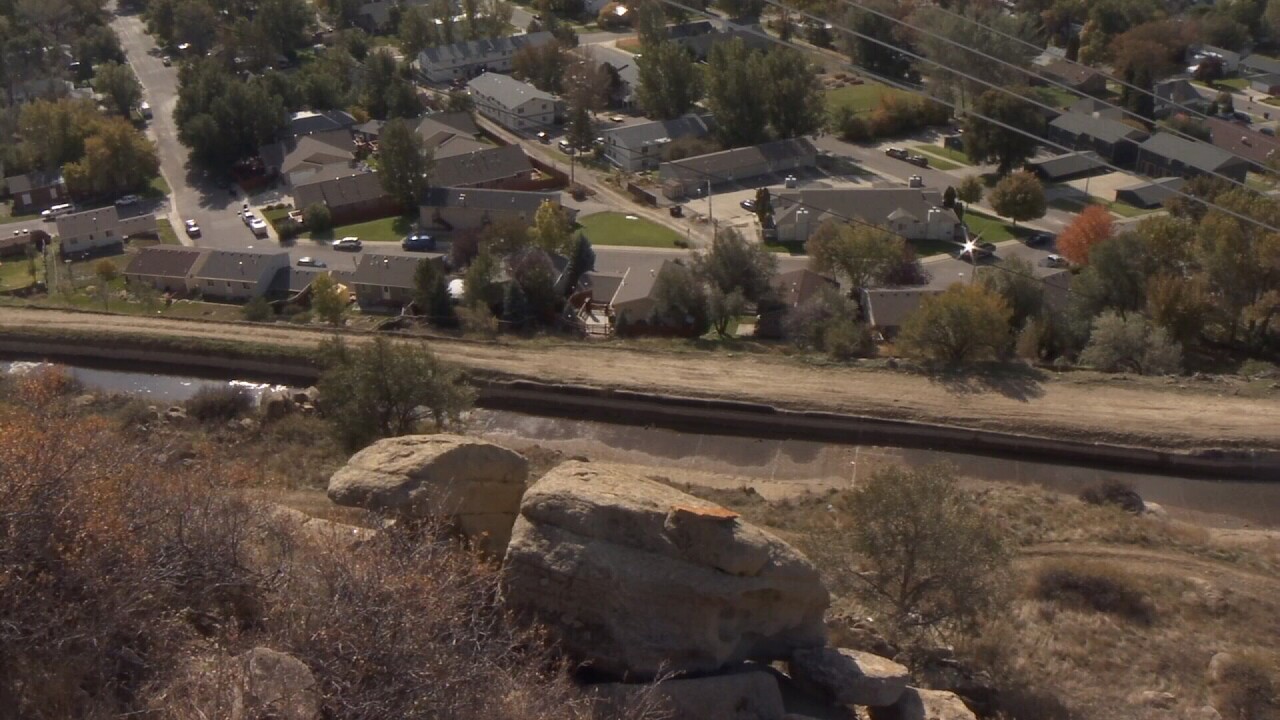 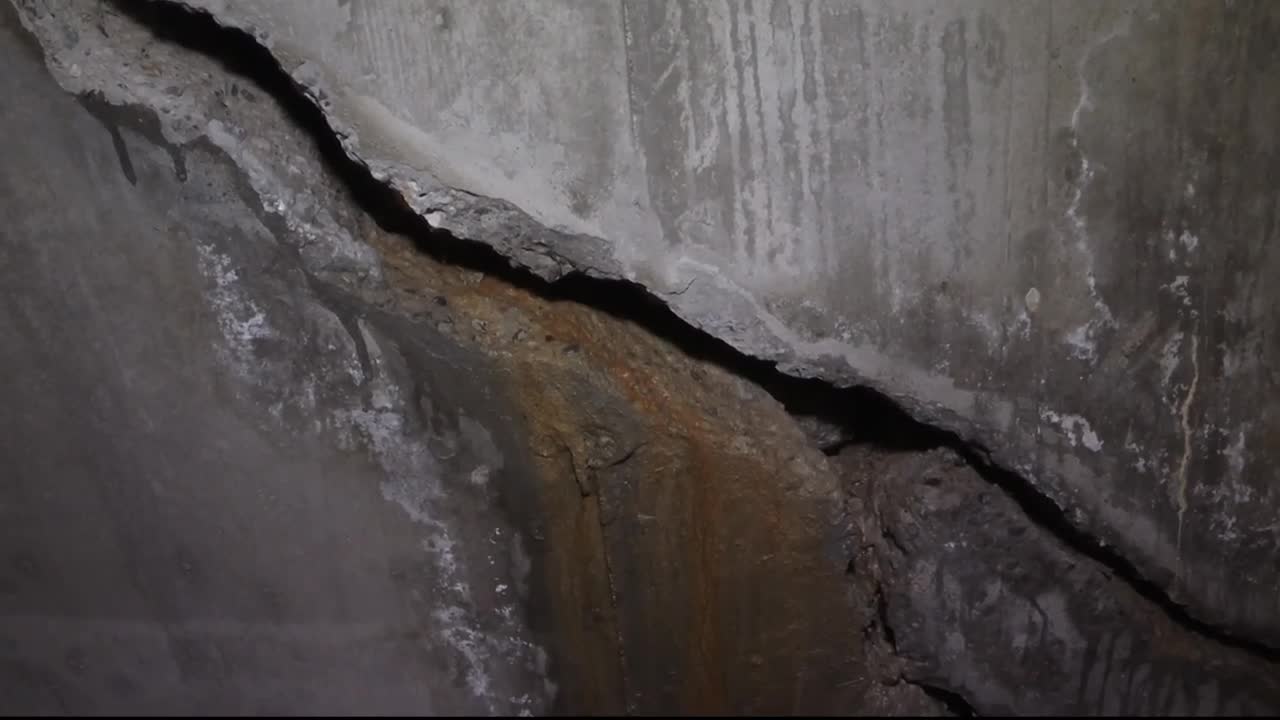 As the Billings canal drains this fall, homes in a North Billings neighborhood continue to crumble beneath it, with damage getting progressively worse.

And now, there are more worries for homeowners as a new crack has formed at the canal, prompting an independent engineer to express concern of a sudden "catastrophic failure,” potentially wiping out dozens of homes in the neighborhood unless precautions are taken.

However, homeowners are struggling to figure out who's potentially responsible for the damage, wending their way to a complex web of water and property rights dating back decades.

The Groscops' home is 'crying'

On Vuecrest Drive, a handful of homeowners on the 1600 block have moved out.

Charlie and Shari Groscop have owned their home for 17 years. But suddenly in the spring of 2019, they noticed immediate changes to the foundation of the home.

“This is my daughter’s bedroom, and (its) pretty alarming when you see something like that, in your child’s bedroom,” said Charlie Groscop.

He’s talking about a massive crack that formed in their basement behind the pink walls of his girl’s lower level bedroom.

The sheet rock started to fall from the ceiling of bedrooms and when it did, the Groscops noticed a crack forming.

But that wasn’t all.

“You can see that the wall is... it’s basically crying,” said Groscop. “The studs have snapped.”

The moisture in their house just didn’t stop flowing in.

The walls started to bow in. The backyard was seeping with water. Egress windows started filling up with water.

“And we decided we need to move,” he said.

The family deemed that the house was too unsafe to live in anymore, so they shut off the power and gas and moved out in July.

The Groscops believe the irrigation canal is not being maintained properly by the Billings Bench Water Association, and they began to search for answers.

Charlie said they had no other choice than to take legal action.

“And we can’t turn it into the insurance. We’ve talked to the city about it, and they said talk to a lawyer or the ditch,” he said.

So that’s exactly what they’re doing. Their lawyer, David Legare, then hired an independent engineer from Bozeman to gain perspective on the situation.

“There a risk of catastrophic collapse,” said Legare. “The dirt flows in, the houses move out. Water flows in, and it’s going to be more than just these homes. It will be other homes, apartment complexes in the area.”

The fear from Doug Chandler with Allied Engineering Services out of Bozeman is just that.

Chandler believes that because the embankment above the homes is steep and high, the earth mixed with moisture could move at any time and progress into a sudden and catastrophic failure to the area.

He also said the formation of a new crack at the ditch site presents a higher concern for safety after the construction of a liner was put in the site this past spring.

His assessment of the area was then forwarded to the city of Billings for review.

What role does the city play?

A geological survey done in the early 2000s indicated the area was at high risk for landslide. But despite that, a developer moved forward, and the city granted permits to build the Vuecrest neighborhood.

“The fine print that exists on peoples' deeds and where they build and whether it’s close to the Rims or close to the river or other things, there are risks there that we as a city, and I think appropriately, don’t regulate as a private property right,” said Billings City Administrator Chris Kukulski. "That being said, we want to make sure what is built is done according to the code.”

He said in the meantime, the Billings Fire Department has been looking at the area and doing something called “target planning” in the event of an emergency.

“It just heightens our preparedness and our need to be prepared for how to minimize the impact,” he said.

Still, Kukulski said, despite the opinion of an engineer, officials within the city see no imminent danger to the neighborhood right now.

“We have not received anything that would say that it’s imminent or this will happen. Otherwise we would be taking appropriate actions to evacuate the area. That’s not where we are,” said Kukulski.

In Montana, waterways serve as a lifeline to many, bringing hydro electric energy to power lines, moisture to crops and livestock. And water rights in Montana go back decades, setting the tone for disagreements among property owners.

The Billings Bench Water Association is a privately held entity and goes as far back as the early 1900s when it started distributing water to Yellowstone County.

Gary Davis is president of the ditch association and declined to speak on camera with MTN Investigates about the issue with the Vuecrest homes.

However, Davis is confident that the Billings Bench Water Association has a solid case, if legal action comes his way.

He said the ditch has been running long before homes were ever built below.

But there is no disagreement about improvements to the canal area.

A 2017 report by the Montana State University extension office outlines water rights in Montana. It says irrigation projects in Montana serve over 365,000 acres of land, but that $50 million is needed to maintain the integrity of dams and canals in the coming years.

That’s why the Billings Bench Water Association has been working with its own engineer on a large-scale plan to make improvements to the Billings canal.

That engineer’s report said the canal loses 790 million gallons of water a year, due to seepage through well-draining soils.

Davis believes the homes shouldn’t have been built below in the first place and directed MTN Investigates to a 1985 court case in Yellowstone County where a developer tried suing the ditch company after learning the land he purchased (which is now Vuecrest Drive) couldn’t be developed.

Davis believes the case with the homeowners on Vuecrest will be cut and dry- much like the one from 1985.

The future of the Groscops' home is unknown. Now, the family is temporarily living in their camper trailer on the other side of town, still paying the mortgage on their unlivable house each month.

They are hoping the Billings Bench Water Association will do the right thing—he says ’’that’s buying the land in which the homes sit below and fixing the seepage.

“It’s frustrating that somebody that’s responsible for this is not taking responsibility for it,” said Charlie Gorscop. “Hopefully (they) take ownership of this property so they can fix their ditch properly and fix the problem, so it doesn’t become catastrophic”