SPOKANE – A plane crashed on Interstate 90 at Lookout Pass on Tuesday afternoon near the Idaho/Montana state line, officials confirmed.

A witness said he watched an experimental airplane glide down onto the highway around 2 p.m. on Tuesday.

Tim Halbert said he was the one of the first people on the scene and waited with the pilot for emergency responders. He said the pilot was experiencing some back pain and had a few bumps and bruises but walked away from the crash.

"A sheriff’s deputy that was there told him to go buy a lottery ticket," Halbert said.

"I knew he was in trouble because he was so low," Halbert recalled. "He just kept getting lower and lower and sure enough, he just crashed."

Mineral County Sheriff’s Office confirmed they were responding to the incident, but did not have any further detail.

Montana Department of Transit sent out a notification the eastbound lanes at Lookout Pass on the Montana side are blocked but traffic is able to get through the median. After speaking with a witness, it appears the road closures are as a result of the plane crash.

KREM 2 is still waiting to hear from officials on the pilot’s injuries, but a Halbert said he appeared to be OK.

— KPAX, KREM’s sister station, has a crew on the way to the scene.

LOOKOUT PASS – KREM TV in Spokane has confirmed that a plane has crashed at the Montana/Idaho border at Lookout Pass.

The Mineral County Sheriff’s Office could not confirm what type of plane was involved, how many people were on the plane or what injuries may have been sustained.

The Montana Department of Transportation reports that both eastbound lanes are blocked .5 miles east of the Idaho border, but traffic is able to get through the median.

KPAX TV has a reporter en route to the crash. 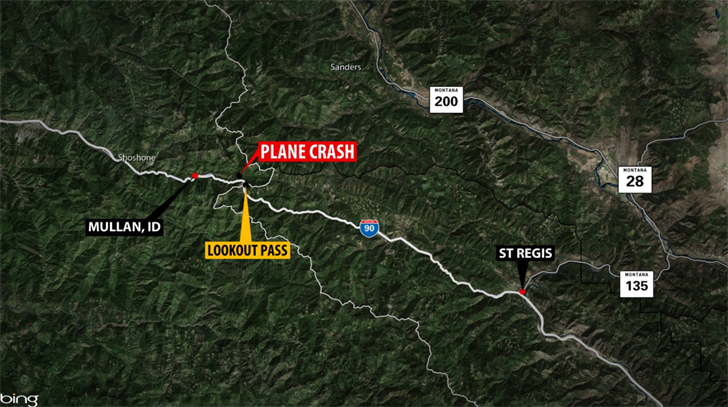