President Trump has canceled the upcoming summit between the United States and the North Koreans in a new letter released on Thursday. Mr. Trump writes in the letter that he was "very much looking forward to being there with you. Sadly, based on the tremendous anger and open hostility displayed in your most recent statement, I feel it is inappropriate, at this time, to have this long-planned meeting."

He also told Kim in the letter, "You talk about your nuclear capabilities, but ours are so massive and powerful that I pray to God they will never have to be used." 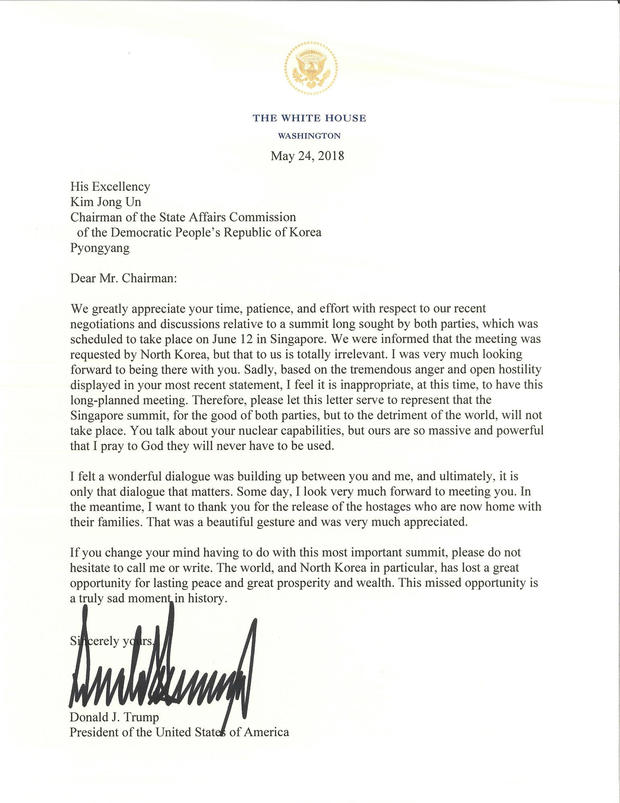 His comments appear to refer to insults from the North Koreans directed at Vice President Pence. North Korean Vice-Minister of Foreign Affairs Choe Son Hui, quoted by the state-run news agency, said of Pence Thursday, "I cannot suppress my surprise at such ignorant and stupid remarks gushing out from the mouth of the US vice-president."

Pence, in his own interview on Fox News on Wednesday, had seemed to threaten the North. "You know, as the president made clear, this will only end like the Libyan model ended if Kim Jong-un doesn’t make a deal."

Under the Libyan model, Libyan leader Muammar Gaddafi dismantled his nuclear program in exchange for sanctions relief. The agreement was initially seen as a success for denuclearization, with Libya welcoming "international inspectors to verify the dismantlement. But eight years later,  Gaddafi was overthrown in a gruesome killing by Western-backed rebels.

Just Thursday, North Korea announced it had destroyed its Punggye-ri nuclear test site, and CBS News correspondent Ben Tracy was the only U.S. broadcast network correspondent on hand to witness several large explosions at Punggye-ri. He was among about two dozen international journalists who had been brought to the site to witness what the North said was the decommissioning of the nuclear test site.

Mr. Trump also wrote to Kim he felt a "wonderful dialogue was building you and me," and continued, "Some day, I look very much forward to meeting you." He thanked Kim for the recent release of three American hostages, calling it a "beautiful gesture and was very much appreciated."

"If you change your mind having to do with this most important summit," he adds, "please do not hesitate to call me or write."

The news comes after Mr. Trump has expressed some doubt over the June 12 date in Singapore, recently telling Fox News in an interview recorded Wednesday, "We’ll see what happens."

Members of the administration including Secretary of State Mike Pompeo were still pushing for the June 12th date as recently as Wednesday. Pompeo testified before the House Foreign Affairs Committee where he said that the summit was "still scheduled for June 12." Pompeo spoke highly of his previous meetings with Kim, saying the U.S had made "zero concessions" to the leader, and discussed economic sanction assistance in return for complete and verifiable denuclearization.

He added, however, "We are clear-eyed about the regime’s history. It’s time to solve this once and for all. A bad deal is not an option. The American people are counting on us to get this right. If the right deal is not on the table, we will respectfully walk away."