The definitive ranking of 2020 Democrats

Which, in our expert opinions, is a long way from now. Too long, some might say, to make predictions of any sort about how the 2020 race for the Democratic presidential nomination to challenge President Donald Trump might play out.

The process of running for president — given the money a candidate has to raise and the organizations that must be built in early voting states — is like an iceberg. The bit that pokes its head out of the water is only a very small part of a much larger mass below the surface.

We are in the below-the-surface part of the presidential primary fight right now — and will be for at least the next five months, while the Democratic Party focuses on trying to win back control of the House and Senate. But just because you don’t see or hear about everything that’s going on doesn’t mean it’s not happening.

Which brings us to our rankings of the 10 men and women most likely — as of today — to wind up as the Democratic nominee in 2020. In ranking these candidates, we considered current polling, historic trends and lessons that the 2018 Democratic primaries have taught us. So, we tended to default to early polling leaders. And women. And liberals.

Obviously, this list — just like what Democratic voters are looking for in their candidate — can and will change between now and when the first ballots are cast. And we will be there the whole way, releasing updated rankings once a month between now and then. Don’t see your favorite candidate? Just wait! Or email us and make an argument for what we missed and why; it’s cillizza@cnn.com and harry.enten@cnn.com. 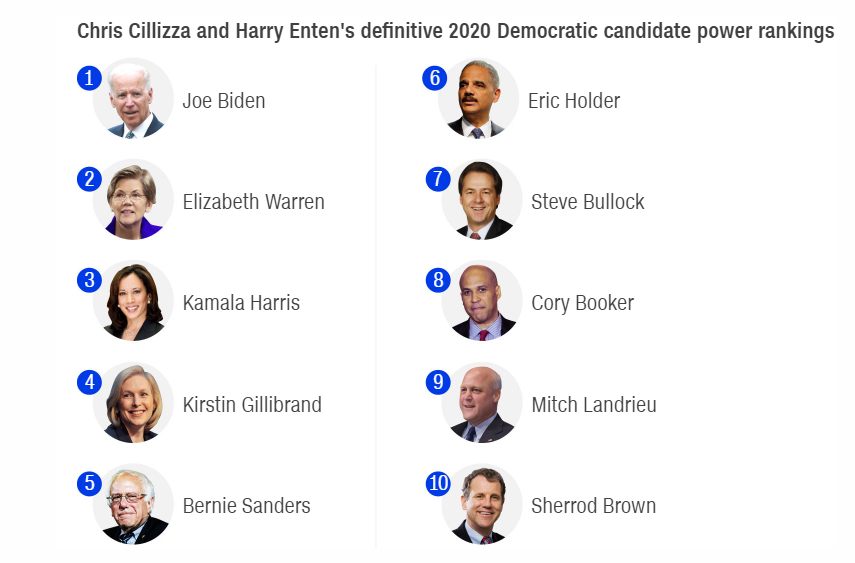 10. Sherrod Brown: How do you beat a populist like Trump who triumphed in Midwest? You could nominate a Midwestern populist like this senior senator from Ohio. Brown’s liberal recordmatched with a gravelly voice that seems almost out of central casting could be the ticket for Democrats. Brown, though, has said he has no interest in running (and he’s up for re-election to the Senate this fall). At the same time, it’s somewhat hard to imagine Democrats nominating a white senator. Especially one with some question marks in his personal history.

9. Mitch Landrieu: If Democrats want an outsider with experience, then there are few people better than this two-term mayor of New Orleans who has never held federal office. As mayor, he removed Confederate monuments. Being mayor of a majority black city in a party that has a substantial black voting bloc and is becoming more urban could also pay off big. Yet, even with Trump in the White House, it’s tough to imagine that a little-known mayor could win a major party nomination. Especially one with some potholes in his record.

8. Cory Booker: In what is shaping up to be a big field, Booker will have little difficulty generating press. He’s been doing that since a documentary was made about his first run for mayor of Newark (It’s a great documentary). Democrats also have a history of nominating first full-term black senators who have recently given a big Democratic National Convention speech. Want to know why Booker isn’t higher? Google "Cory Booker" and "neo-liberal." Booker may have a major issue with the left intelligentsia due to his ties to Wall Street.

7. Steve Bullock: Bullock, if you don’t know, is the two-term governor of Montana. That’s a big part of Bullock’s challenge; if he runs he will take on a whole bunch of candidates who are already known nationally. He is, well, not. But the party’s growth in the West — and the success of governors as presidential candidates — means that a governor from this part of the country seems likely to emerge. Bullock looks best positioned to be that guy right now. He’s been traveling to early voting states to lay the groundwork and refine a message about why — and how — Democrats need to expand their tent.

6. Eric Holder: The name of the former attorney general was on almost no one’s lists at the start of 2018. But he’s made clear in both his travel and his rhetoric of late that he is seriously open to running for president. In June, Holder acknowledged that running for president in 2020 is ""something that I’m considering." And he’s already got a schtick against Trump; "Two guys from Queens," Holder said. "That would be interesting. New Yorkers know how to talk to other New Yorkers." Holder would likely be seen as former President Barack Obama’s favorite in the race given the duo’s long friendship. Presumably that is a good thing in the context of a Democratic primary.

5. Bernie Sanders: Sanders is one of the most beloved politicians within the Democratic Party (even though he’s not technically a Democrat), with strong favorable ratings. He’s a proven vote-getter in presidential primaries (earning 43% of the 2016 Democratic primary vote). And in a party that is shifting left, Sanders was left before it was cool. So why is Sanders not higher? He’s a white male, and Democrats may be looking to turn the page from 2016. Do Democrats really want another primary in which they have to argue about whether one of the major candidates is actually a Democrat or an independent?

4. Kirsten Gillibrand: There may be no more predictive qualities in Democratic primaries in 2018 than being anti-Trump and being a woman. Gillibrand has both of those qualities. She’s voted less with Trump than any other senator. Being from New York will also give a megaphone (see Trump, Donald). Why isn’t she higher? Besides the fact that there are other women running, she may have an authenticity problem when that quality seems to be at a premium. Although she is liberal now when it is politically expedient, she was a moderate member of the House.

3. Kamala Harris: If Democrats are looking to draw a very sharp contrast with Trump, Harris makes the most sense. The first-term California senator was the first black and first Indian woman elected to the Senate from the Golden State. She comes from a law and order background; she was attorney general of California before running for the Senate. And she’s from a massive Democratic donor state — meaning the money would be there for her if she did decide to run. As to that: Harris’ mind seems pretty made up; she’s writing a memoir set to publish in 2019, which is a sort of necessary move for someone running for president.

2. Elizabeth Warren: Unlike 2016, when the Massachusetts senator was doing nothing to indicate she might run, Warren is making a series of moves that suggest she is a likely entrant in 2020. Warren has already reached out to politicians in Iowa, New Hampshire and South Carolina, according to The New York Times. If Democrats are looking for some sort of compromise candidate between the establishment and the party base, Warren could fit the bill somewhat nicely. Republicans repeatedly insist she is their ideal general election candidate against Trump, believing that Warren is simply too liberal to possibly win nationally.

1. Joe Biden: The former vice president may not seem like the perfect fit for this moment in the Democratic Party — he’s older (75), white, male, and has been in electoral politics for more than four decades. And yet, Biden has something that no other candidate in the field has. First, he’s on top of early polls gauging the 2020 field. He’s leading in national polls, early primary state polls and in a matchup against Trump. That’s no guarantee Biden wins the nomination — but if history holds, it’s an indicator he’ll be right there until the end.