GLACIER NATIONAL PARK – Wet weather is helping to slow down a wildfire that’s burning in the northeast part of Glacier National Park near the Canadian border.

Fire managers report on Monday morning that 0.70" of rain has been recorded at Goat Haunt which is expected to moderate fire activity but not extinguish the blaze.

The precipitation has prompted Parks Canada to lift the evacuation alert that was put in place at Waterton Lakes National Park late last week. Click here for complete information about closures.

A Parks Canada helicopter dropped water on a hot spot on the north side of Boundary Creek on Sunday as U.S. National Park Service personnel assisted from the ground.

A U.S. helicopter was used later on Sunday for aerial ignition to bring the fire to the edge of avalanche paths in order to stop the spread of fire east toward Waterton Lake. Structure protection is in place at Goat Haunt, in case the fire reaches that area.

The blaze has burned approximately 2,100 acres since sparking to life on August 23rd in the Boundary Creek Valley, near the Campbell Mountain area west of Upper Waterton Lake.

U.S. Customs and Border Protection announced on Monday morning that the seasonal Port of Goat Haunt in Montana will be closed indefinitely due to the blaze.

Glacier National Park and most of western Montana are under Stage II Fire Restrictions.

No campfires are permitted in Glacier’s frontcountry or backcountry. Smoking is also prohibited except within an enclosed building, vehicle, developed recreation area, or barren area three feet in diameter. Propane stoves that have an on/off switch are permitted. 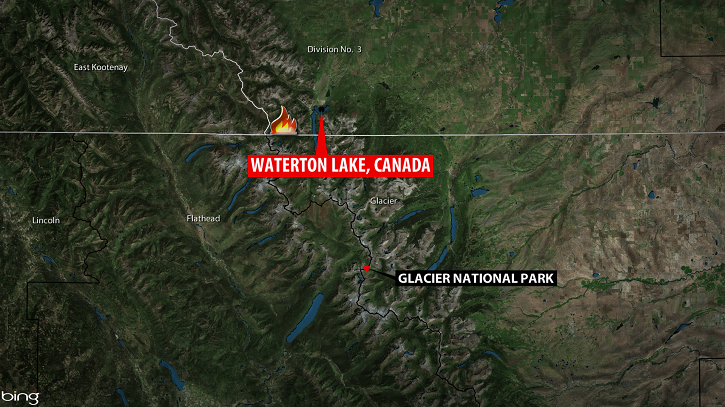