MISSOULA – A summer road trip turned tragic for a Colorado family as they journeyed through Missoula last month when an out-of-control pickup truck slammed into their RV on Interstate 90, with deadly results.

But when they were at their worst, Missoula was at its best. And now this family is saying thank you to the town that saved their lives.

It’s a summer afternoon on Aug. 2. The Diaz family was heading home to Colorado after a road trip in their RV. They made it as far as East Missoula when Tanya Diaz, at the wheel, saw an out of control pickup truck heading right towards her.

"I was like, oh, we missed it. The second I thought that it was ‘CRASH,’ right into my face"

The pickup was on its side when it hit, slamming into the driver’s side and then sliding down the length of the entire 35-foot RV. Something tore into Tanya’s left arm, cutting almost clean through, and trapping her in the torn steel.

"Because right when it hit, oh my God, the pain, Jill. It was like nothing I had ever felt in my life. It was excruciating. I remember just, and I’m holding on the steering wheel, and I just start curling up."

In shock, Tanya kept driving, afraid of rolling the RV. Her partner finally coaxed her to the side of the interstate. But who was hurt? And how badly?

Missoula County Sheriff’s Corporal Zach Sargent and deputy Jason Jones quickly arrived at a chaotic scene. Not only was Tanya gravely wounded, but her father Alvaro Diaz, who was sitting in the back seat, was dead. CPR could not revive him.

They weren’t sure Tanya was going to survive.

"Definitely had the look on her face like she was going to die if we didn’t do something," Jones said.

What they did was stop the bleeding with a tourniquet and wait for the jaws of life to cut Tanya free. 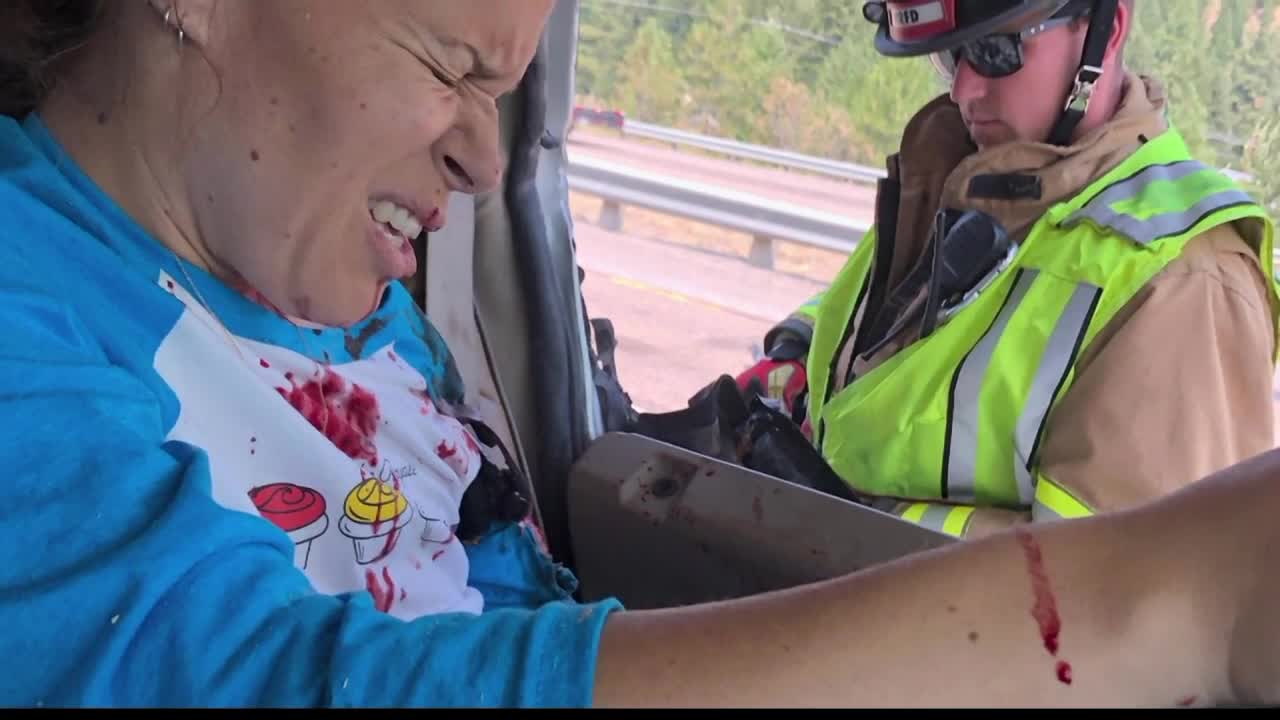 (Tanya’s partner took a photograph of the rescue effort from inside the cab. Courtesy photo.)

They helped her seriously-injured son and assisted the six others in that RV, a coordinated effort to safe a family.

On this terrible day there were moments of grace, from the doctor who pulled up on the crash scene to help, to the expert surgeon who was able to reattach Tanya’s arm, to the two deputies who were carrying their own personal tourniquets on their vests at the time.

"My main purpose when I first started carrying one is either for me or for one of my partners, if something bad were to happen. We all carry them for us but when we get to something like that it’s pretty obvious that we’re going to use it," Jones said.

"From what the doctor said, without that tourniquet, I probably would have bled out by the time I got to the hospital," Tanya said.

Tanya is home recovering in Colorado Springs, but even after the worst day of her life and the death of her beloved father, Tanya and her family are reaching out to the Missoula County Sheriff’s deputies, the Montana Highway Patrol, Saint Patrick Hospital and the people of Missoula who saved them.

"The whole Missoula experience, I mean, I can’t say enough because it was an overwhelming outpouring of, oh my gosh, I can’t believe it. Are you OK? What can we do? There was so much positive that came out of this and so much love that I can’t be sad and I owe it all to my family and Missoula."

It was people who donated money and a condo to stay in. They gave them clothes and shoes. Strangers offered them hugs and prayers, and in the end, maybe something more.

"That entire town saved my life. Took in my family, helped my attitude, built me up. Fixed a lot of things, not just in my shoulder and my back and all of that, but mentally and emotionally. I didn’t know that people cared that much."

It was Corporal Zach Sargent that was able to get the tourniquet on without much arm left to stop the bleeding. Both he and Jones are now nominated for life-saving awards for their actions that day. Tanya is also grateful to MHP Trooper Andrew Novak and Doctor Gary Willstein.

The driver of the pickup truck involved in the crash was not seriously hurt.