POLSON – Two people are facing several charges after a drug raid in Polson. 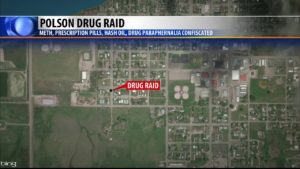