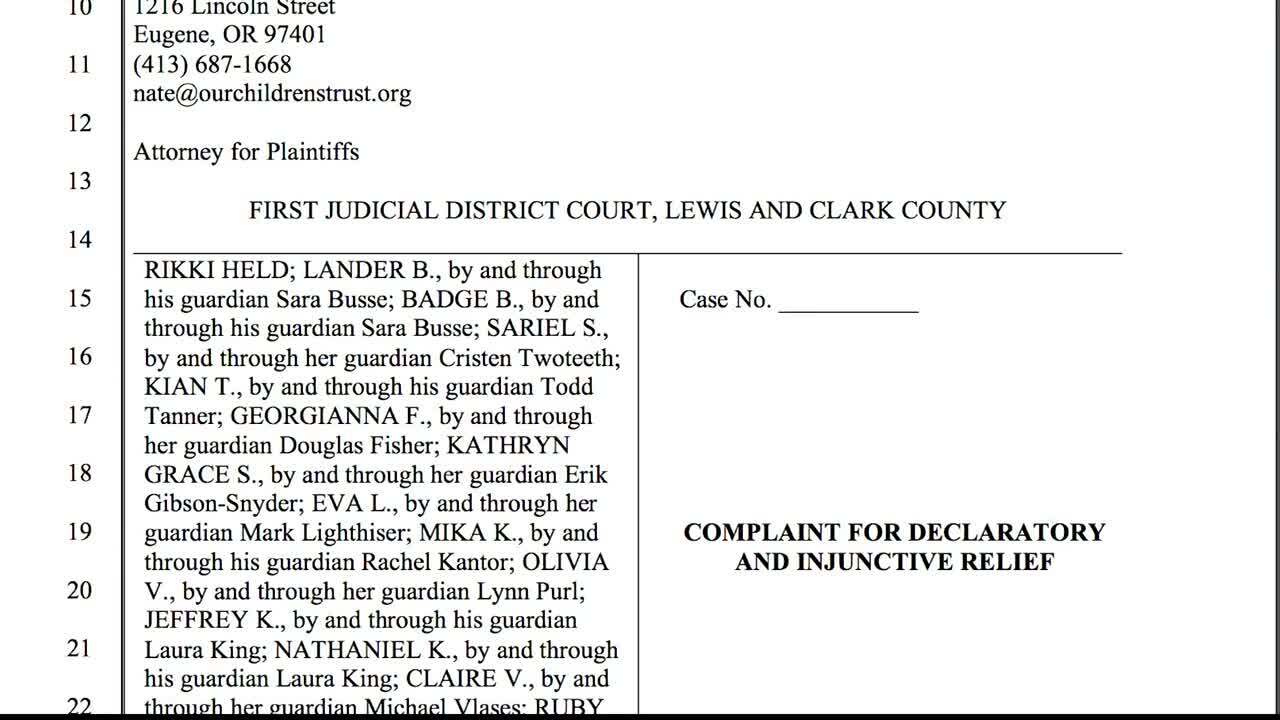 HELENA - A sprawling lawsuit to force the state to rewrite its energy policy, to combat climate change, has been filed in state District Court – and most of the lead plaintiffs aren’t even old enough to vote.

16 Montana youths, acting through their guardians and with the help of two environmental law groups and a Montana law firm, filed the suit late last week in Helena, asking a judge to strike down Montana’s energy policy.

The 104-page complaint also says a 2011 law that forbids the state to consider climate change when evaluating the impacts of major projects is unconstitutional, and should be voided.

The ultimate goal of the suit is to have the courts force the state to scrap its current energy plan, which emphasizes fossil-fuel production and use, and devise a new plan based on clean energy, says Shiloh Hernandez, staff attorney for the Western Environmental Law Center.

The suit says the state energy plan and the 2011 law violate Montanans’ constitutional right to a clean and healthful environment.

The suit names as defendants Gov. Steve Bullock, the state departments of Transportation, Environmental Quality and Natural Resources and Conservation, and the state Public Service Commission.

The defendants have until the end of April to file their initial response.

A spokeswoman for the Department of Environmental Quality said it hadn’t yet seen the suit and would have no immediate comment.

Hernandez said similar lawsuits have been filed in several other countries and other states, to attempt to force policymakers to address climate change and greenhouse-gas emissions.

However, Montana’s constitution is unique, with its right to a clean and healthful environment, obligating the state to maintain and protect that environment, he said.

He said a new energy plan would have to reduce emissions from coal-fired power plants, oil and gas production and fossil-fuel-burning vehicles – the major sources of greenhouse gases.

While people may see those changes as “very disruptive,” evidence has shown that overhauling the economy toward clean energy would be beneficial in the long run, Hernandez said.

Most of the 16 plaintiffs are teen-agers, from across the state. The suit gives a short biography of each plaintiff, who live on ranches, cities and Indian reservations, explaining how climate change has impacted their lives, from respiratory diseases to floods to wildfires to diminished outdoor recreation opportunities.

The lawsuit said while the state professes to pursue all types of energy, its energy policy enshrined in law emphasizes fossil fuels, calling for expanded development of coal, oil, natural gas and petroleum refining.

When the Legislature and the executive branch ignore basic rights in the constitution, it’s up to the courts to bring them in line, Hernandez said – and they’ve done so on major issues in the past, such as school funding in Montana and school desegregation in the nation.

“The magnitude of climate change is so great, that everyone has to be involved,” he said. “It’s not the case that the solution can be left to China, left to Russia. We have to start here … We alone aren’t able to solve it, but if we’re not involved in the solution, there’s not going to be an adequate solution.”