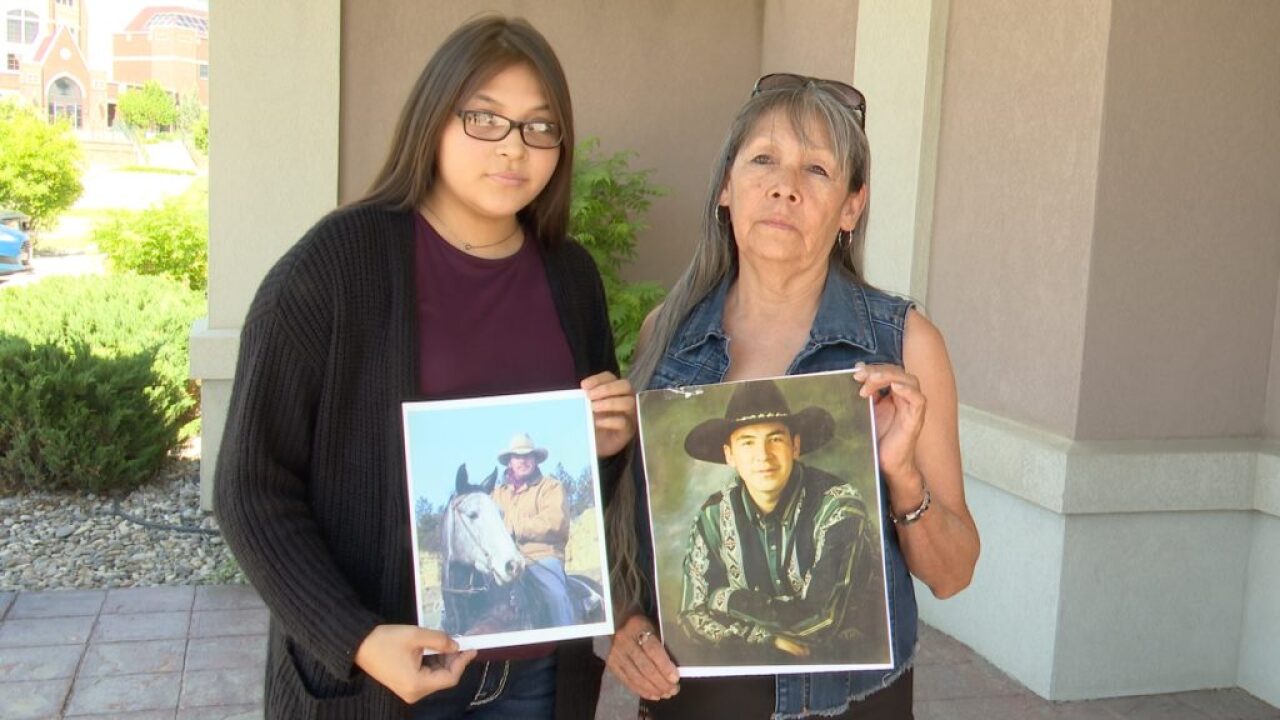 Daughter Precious Bearcrane and mother Earline Bearcrane-Cole hold photos of Steven Bearcrane, who was shot and killed on the Crow reservation in 2005.

HELENA — The family of a man killed on the Crow Reservation in 2005 has decided to settle their decade-long lawsuit, accusing the FBI of providing unequal law enforcement services for Native Americans.

Steven Bearcrane, a member of the Crow tribe, was shot and killed by a white co-worker at a ranch on the reservation. After the FBI conducted an investigation, a grand jury declined to file any charges against the man who shot him.

Bearcrane’s family argued the FBI agent who handled the case came in assuming Bearcrane had been the aggressor, and that he didn’t give enough weight to evidence that the shooting might not have been self-defense. In 2009, Bearcrane’s parents and daughter filed suit in federal court, claiming the FBI had acted in a discriminatory way – treating cases involving Native Americans differently.

Earline Bearcrane-Cole, Bearcrane’s mother, told MTN the ensuing 11 years of the legal fight have been difficult for the family. “It really took a toll on us emotionally,” she said.

Various court rulings eventually narrowed the lawsuit to a single issue over crime victim compensation. The family said settling the case was now the best way to move forward in seeking justice for Steven Bearcrane and other Native Americans.

“What we wanted from the very beginning was a reinvestigation,” said Bearcrane-Cole. “That was the only thing we wanted way back. Going down this new path, there’s a better chance of getting that done than continuing through court.”

Patricia Bangert, the Bearcrane family’s attorney, echoed that in a statement announcing the settlement.

“While litigation has served one purpose, it has also prevented the Bearcrane family from actively lobbying government officials to make changes on the reservations,” Bangert said. “When there is ongoing litigation, government officials – elected or appointed – won’t get involved in an issue because they don’t want to ‘take sides.’ Without litigation, the Bearcrane family is free to lobby those officials and bring to their attention problems on the reservation.”

The family says, as part of their settlement agreement, they will meet with officials from the FBI and the U.S. Department of Justice to share their concerns about law enforcement services on reservations.

“We’re just going to voice our concerns to them about law enforcement, about safety, and they can take it from there,” Bearcrane-Cole said.

They also plan to set up an organization to help other Native American families that have had similar experiences share their stories about law enforcement issues.

“We just want to open it up, to let them know that there will be someone hearing or listening if they want to come forward – and perhaps something can be done to help them,” said Bearcrane-Cole.

Bearcrane-Cole said she is glad the lawsuit has brought attention not only to Steven Bearcrane but to the broader challenges facing the Native American community. She said they will continue to fight to have his case re-examined.

“We all need to have justice,” she said. “That’s what this country is made for: It was made for justice – justice for all – and it needs to be done fairly.”