KALISPELL – A black Audi crashed into the Mystique Fly Shop on Main Street in Kalispell on Monday, Feb. 4 at approximately 12:50 p.m.

Poor road conditions were believed to have caused the crash.

Kalispell Police officers were at the scene and no major injuries were reported, although it appeared that the glass on the shop’s window had been cracked. 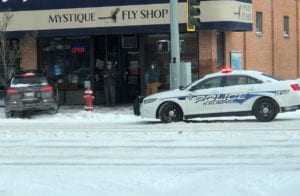