But in the meantime, drivers will continue to “jam” the gears over Logan Pass as they have for decades.

Olson retired in Florida where he’s originally from and spends his summers in Montana. He said that coming to the Treasure State is a tradition for him and his family.

“This is my summer tradition. I love it, I keep coming back until I get tired of it,” Olson explained.

Olson gets to work alongside his wife who is also a red bus driver. She first became interested in driving 10 years ago after seeing how much fun Russell was having at work.

“Well, my wife is a red bus drive, she’s been a red bus driver for about ten years. She started off as a clerk in the gift shop and then when she saw how much fun I was having, she said hey can I become one?” said Olson.

He and his wife drive two of 35 original red buses for the park.

The drivers are affectionately known as jammers because back, when buses were manually driven the gears, would stick and the drivers would have to “jam” the gears into place. 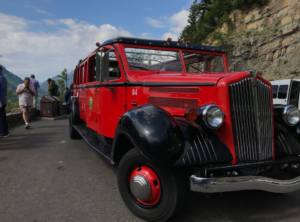 Olson makes the job look easy. Not only does he have to drive Going to the Sun Road, but he talks about park history while he does it.

Each bus driver spends three weeks learning the park’s history and how to drive in the park.

With almost three million visitors last year to the park, Olson says this training is crucial while on congested roads.

“About 15 years ago we were lucky to get a million visitors, now we’re getting three million. All that’s happened is it’s become very congested on the road, I always drive slow anyways, but you have to pay attention because the road is narrow,” Olson said.

The buses are looking for an upgrade and starting this fall visitors could see red buses that are electric hybrids.

The new buses won’t look any different on the exterior but will produce less toxic emissions for the park.