A pan of pie: City Council members give business to Worden’s, food to the Pov 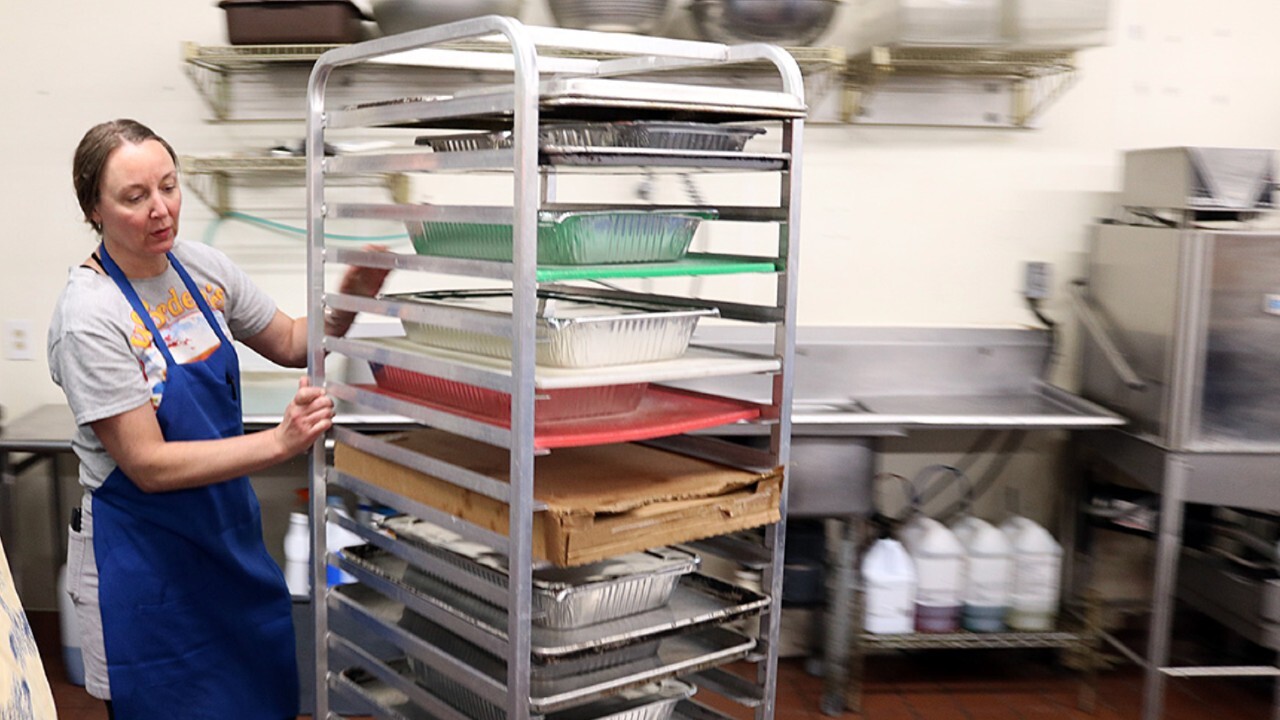 Martin Kidston/Missoula Current
<i>Jamie Liphardt, catering and kitchen manager at Worden’s Market, wheels a stack of shepherd’s pies into the deli on Thursday morning. The food was purchased by members of the Missoula City Council as a donation to the Poverello Center. </i>

MISSOULA — Even in normal times, it’s too early for a morning crowd when Jamie Liphardt wheels a stack of shepherd’s pies – each generously smothered with mashed potatoes – into the deli at Worden’s Market.

A team from the Poverello Center is waiting, thinking of lunch, when the pies will be served hot and fresh to the shelter’s clientele.

“It’s a great example of community coming together,” said Jesse Jaeger, the shelter’s director of development. “This is supporting a local small-business institution, and it’s helping people at the Pov get a meal and helping us keep people fed.”

While the COVID-19 pandemic hasn’t hit Missoula as hard as other locations, it has put a pinch on the local economy. Businesses have been forced to reduce staffing or close, and revenues have fallen during a shutdown intended to keep the virus at bay.

Seeing an opportunity to help during challenging times, members of the Missoula City Council and the Office of the Mayor pitched in this week to purchase enough shepherd’s pies from Worden’s to feed 150 homeless residents, all while bringing welcome business to a local establishment.

“We really need to do what we can to support our local businesses. They need us now more than ever,” said council member Stacie Anderson, who helped spearhead the effort.

Missoula City Council member Stacie AndersonOn any given Wednesday, several council members typically break from committee meetings to meet at Worden’s for shepherd’s pie. With committee meetings off the table due to the virus, and business slow at the corner market, Anderson decided to buy the pie anyway – and lots of it.

A self-described foodie, she asked her fellow council members to pitch in to purchase the pies for the Poverello, which they agreed to do.

“Because so many people in our community are facing more challenges, there’s a higher need for the soup kitchen at the Poverello,” said Anderson. “They are the last resort for people to get a warm, hot meal, and as people struggle, that need goes up.”

As staff loaded the pies on Thursday morning, Montana reported 71 cases of COVID-19, along with its first hospitalized patient. Both local health departments and state officials this week extended the mandatory closure of restaurants and bars, casinos, gyms and theaters, along with other businesses.

The precautionary closure has forced thousands of Montanans to file for unemployment – nearly 17,000 by Thursday morning. It also has left many small businesses considering their future while exploring ways to survive the economic consequences of a global pandemic.

“We’re all in this thing together, and folks coming in here is helping us, and us being here is helping the community,” said Worden’s manager Matt Muhsam. “In the case of this shepherd’s pie, it’s like one of those pay it forward things. The City Council came together to help us out to help the Pov out, and hopefully it will inspire others to do the same thing.”

Anderson, along with several other council members, offered their thoughts on the issue during Monday night’s City Council meeting. The impact of the virus on local businesses and their employees hasn’t gone overlooked, though there’s little local government can do at this point in time to stave off the impacts.

Anderson took those thoughts home with her that night, wondering what more she could do, and which local businesses she would miss the most if the virus were to erase them from the economic landscape.

Worden’s catering and kitchen manager Jamie Liphardt, right, chats with Worden’s manager Matt Muhsam early Thursday morning.“I don’t want this social distancing to cause a big social reorder in Missoula,” she said. “I don’t want, when we do come out of this, to live in a community where only the chains and box stores have survived, and the only places to shop are Amazon, Costco and Walmart. I don’t want to live in a Missoula where there isn’t a Clyde’s Coffee, live music at the Top Hat, or Zoo Thai or sandwiches at Docs or muffins from Break.”

The pandemic also has left many nonprofits in a tough position, including the Poverello. Over the past week, the shelter has reported a decrease in food donations as grocery stores struggle to stock items.

“The level of support we’ve been getting from the community has been excellent,” he said. “It’s disappointing to see these businesses and restaurants so heavily effected by this whole epidemic. But at the end of the day, I think we’re going to pull together and get through all of this, and it definitely helps having these meals come in.”