BILLINGS – A group condemned by Montana State University-Billings for placing fliers that promote white supremacy on campus appears to be moving west across Montana.

Most recently Identity Evropa tweeted pictures of members posting fliers also at the University of Montana campus and at the Missoula Vietnam Veteran’s memorial. 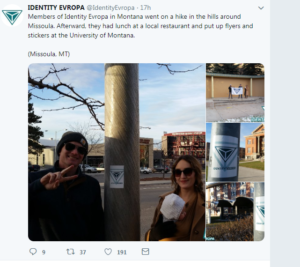 The tweets were posted Tuesday at locations in the Missoula area, including one at the University of Montana campus in front of Washington Grizzly Stadium where a flier was placed on a nearby light pole.

The tweet reads: “Members of Identity Evropa in Montana went on a hike in the hills around Missoula. Afterward, they had lunch at a local restaurant and put up flyers and stickers at the University of Montana.”

There are other pictures also tweeted out around the campus with a picture of what appears to be a statue of a Confederate soldier on horseback and the words “Identity Evropa, European Greatness American Roots,” on the poster. 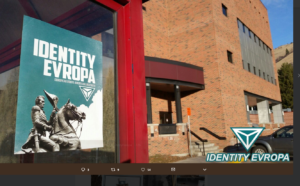 According to its website, Identify Evropa refers to itself as “an American Identitarian organization that its main goal is to create a better world for people of European heritage.”

Recently fliers from the group were found on campuses in Billings.

Communications Specialist at MSU-B Kelsi Gambill said Wednesday that all the fliers originally placed on campus have since been removed.

“They are not approved locations,” said Gambill, who directed Q2 News to a statement previously released by Chancellor Dr. Dan Edelman.

Montana State University Billings can confirm that posters from a group that has been identified as white nationalists have appeared on our university campus. The locations where the posters were placed are not approved locations per our Freedom of Expression Policy, thus the posters were removed.

The university does not condone the positions espoused by the organization that has distributed these posters. By drawing attention to this group it provides them far more legitimacy and credit than they deserve and plays into the very thing they desire, more attention.

MSUB does stand up every day in thoughtful, progressive, and steadfast manner to embrace diversity through policy, programs, and events. That is how we demonstrate that we are an open and welcoming campus.

We will continue to be vigilant regarding this very important matter as there is no place for hate at MSUB.

The fliers that appeared at the MSU-Billings campus showed a depiction of Uncle Sam and reads: “Thank you Veterans!” with Identify Evropa also printed on the flier.

That flier also appeared to be distributed in Missoula. 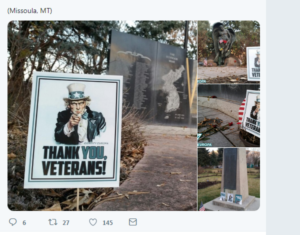 Identify Evropa claims to want to create a better world for people, “particularly in America, by peacefully effecting cultural change,” according to its website.

The Southern Poverty Law Center, which tracks hate groups in America, has identified Identity Evropa as a racist group.

“Identity Evropa is at the forefront of the racist ‘all right’s’ effort to recruit white, college-aged men and transform them into the fashionable new face of white nationalism,” the group said on their site.

SPLC said Identify Evrope was founded in 2016 in Alexandria, Virginia and also claims the group’s ideology aligns with White Nationalist.

When asked if any fliers remained on campus Wednesday morning, Gambill said they have been removed because of the placement of them.