William Gregg was walking through a Missoula grocery store when he realized the local food scene was lacking one important ingredient: mushrooms.

Most mushrooms sold locally are flown in from California or Canada, so Gregg decided to start a commercial gourmet mushroom farm in January of 2018.

Doing his own research and using upcycled plastic buckets to grow the mushrooms, he launched Front Street Fungi while learning about the crop’s complexity.

“Stepping into it with low capital and being able to get into it without spending an arm and a leg, I felt made it really approachable,” Gregg said. “More than anything, there was a niche that needed to be filled in my community. That specific food product was not being cultivated, and I think that I was inspired by that and I was inspired to provide that local food source.”

Gregg has hosted a few workshops to educate others in Missoula on how to grow their own mushrooms and wants to encourage other young entrepreneurs like himself to try farming if they’re passionate about it.

“You don’t have to be an industrial farmer,” he said. “You can be a small-scale commercial producer, and while doing so empower others to be small-scale commercial producers. I’d rather have a community of young farmers in this network that all support each other and our community, and I’d rather have a few mushroom farmers in Montana than one big mushroom factory and farm.”

The process starts with a cultured grain that is transferred into locally sourced, sterilized sawdust, which helps more spores produce mushrooms once placed in a fruiting chamber that provides ample oxygen for growth.

With an effective process, Gregg can use the spores produced by the mushrooms and begin the cycle again.

“The failure rate is high when you begin, but those who have the grit to move past those crop failures and intelligently diagnose situations in their mushroom farm are the ones who are going to succeed,” he said. “Not only do I find that exciting, I find that motivating. It’s exciting to move past a challenge.” 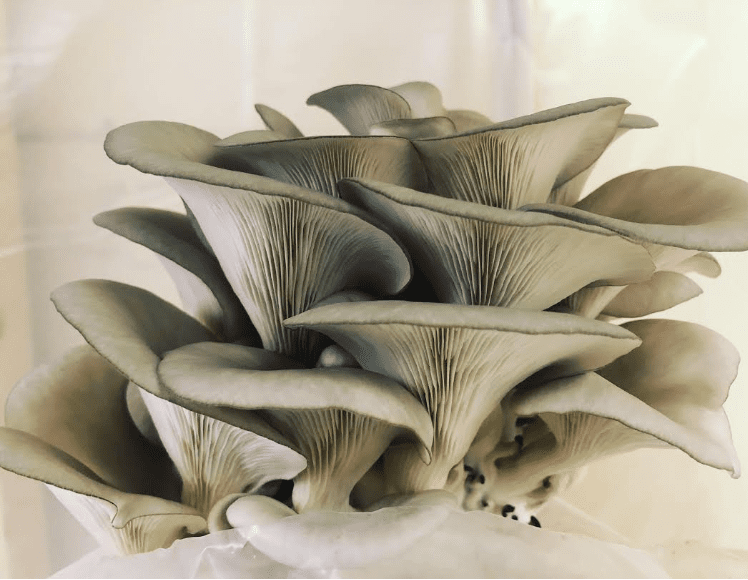 Gregg is also participating in a crowdfunded Kiva loan program through the Community Food Agriculture Coalition of Missoula County. About $3,000 of the $9,000 has been raised to purchase a larger sterilizer that would increase his mushroom production to 700 pounds per week.

After expanding, the mushroom farm will be the largest in Montana, and Gregg hopes to employ others and host internships for UM students. Providing a consultation service to other interested farmers is also on the horizon.

“For me, it’s really exciting to be an entrepreneur and a first-generation farmer,” he said. “I didn’t grow up around anybody who farmed, and so being able to connect with other young farmers and establish the need for young farmers in our community by creating a network of them, is something I’m really excited about.”

Front Street Fungi mushrooms can be purchased every Saturday during the winter farmers market at the Missoula Senior Center.