MISSOULA – The Missoula Symphony is in the process of deciding who will wield the baton, and on Wednesday announced they have narrowed the list down to five candidates.

The symphony said goodbye last week to musical director Darko Butorac who closed out a dozen years with the orchestra.

Each conductor will get a shot at leading the symphony after working with them for a two week period before they perform in front of a live audience.

Officials will then take input from members of the symphony as well as community input to make their decision. 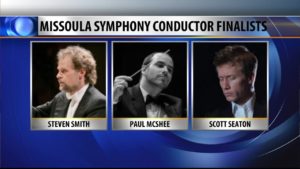 The male finalists for the conductor opening are Steven Smith, Paul McShee and Scott Seaton.

The Missoula Symphony also says they are very proud of the fact that of the finalists there are two women up for the role: Julia Tai and Zoe Zeniodi.

Members of the Missoula Symphony have had input in the decision process and will continue to through the selection of the final candidate.

“Next step is the all have their concert weekends.  They will all be here beforehand and be put through the paces of the rehearsals and the receptions and the meetings you know whatever events we schedule,” explained Missoula Symphony Executive Director Jo May Salonen. 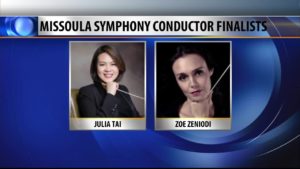 “Then at the end of the season the search committee gets back together we take all of the input from all over the community and our organization and we will make a decision,” she added.

There will be an extra concert put on the schedule next year to make room for all five composers.

None of the guest composers will be conducting the symphony for any of their special holiday performances because that would give them an unfair advantage. Instead, a guest conductor will be brought in and who that will be is still up in the air.