BEARMOUTH – For the second year running, a slow-moving landslide has closed Frontage Road east of Missoula and has the Montana Department of Transportation waiting for the results of a geology report before embarking on a fix.

The slide sits several hundred yards east of the Bearmouth Chalet and RV Park and has littered the road with debris and rock, some as large as a wheelbarrow. The cut sits roughly 200 feet up the mountain and is nearly six feet deep.

“The slump area is still active and we’re waiting for it to dry out,” said Bob Vosen, director of the Missoula District Office of the Montana Department of Transportation. “This is the second year in a row we’ve had issues on that corner with that slide area.”

The slide broke above an area excavated years ago when the old highway was laid. The road separates the slide from the Clark Fork River.

Vosen called it a significant and recurring event that’s being analyzed by a geologist. The slide closed Frontage Road last for roughly three months.

“We did get a drone in the air to get some pictures,” Vosen said. “He’s trying to use that technology to map it, but the tough part is, we can’t get a piece of equipment up there to drill anything until we feel it’s somewhat reasonably stable to put something and somebody up on that hillside.”

The latest slide occurred in early April and is expected to keep the road closed for the foreseeable future. While Vosen said the closure is an inconvenience for some, the geology of the site and the active slide makes it a difficult situation to resolve.

“We recognize it’s definitely not convenient for people using (Frontage Road),” Vosen said. “But we have some challenges on this route, and one is that we don’t have a great funding source to fund a solution, and it’s going to be expensive whatever the solution is.”

Adding to the challenge, a solution can’t be presented until the state has a full understanding of the site’s geology. The underlying strata may be key, Vosen said, thought its depth and composition remain unknown.

Under normal circumstances, he said, the department can stabilize a slope using soil nails or by cutting the slope back to a less severe pitch. It can also install a retaining wall, though that was already done and the recent slide has all but consumed it.

“We need to get in there and get a geo-tech study done so we can figure out deep below the surface – how far we have to go to get to bedrock to tie something in to anchor it,” Vosen said. “There’s a lot of study that has to go into it. When you’re talking about that size, you don’t want to get in there and have the wrong solution, build something halfway and find out you have to change direction.” 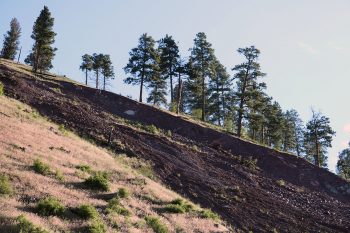 The remedy will likely be costly whatever it is, Vosen said, and safety is key.

“We’ve got the safety situation of not wanting to put people in danger working underneath there,” he said. “I think everyone understands that if you have something that sluffs, you don’t typically go dig out the bottom and wait for the stuff to come back in on top of you, but that’s kind of what we have to do.”

A shift to drier weather could give the state time to find a fix.

“When you have a wet slope that wants to slide, the worse thing you can do is put more water on it,” he said. “I’ve been looking into it to see what we can come up with to get something funded, but it’s an extensive problem and we’re basically reactionary right now.”