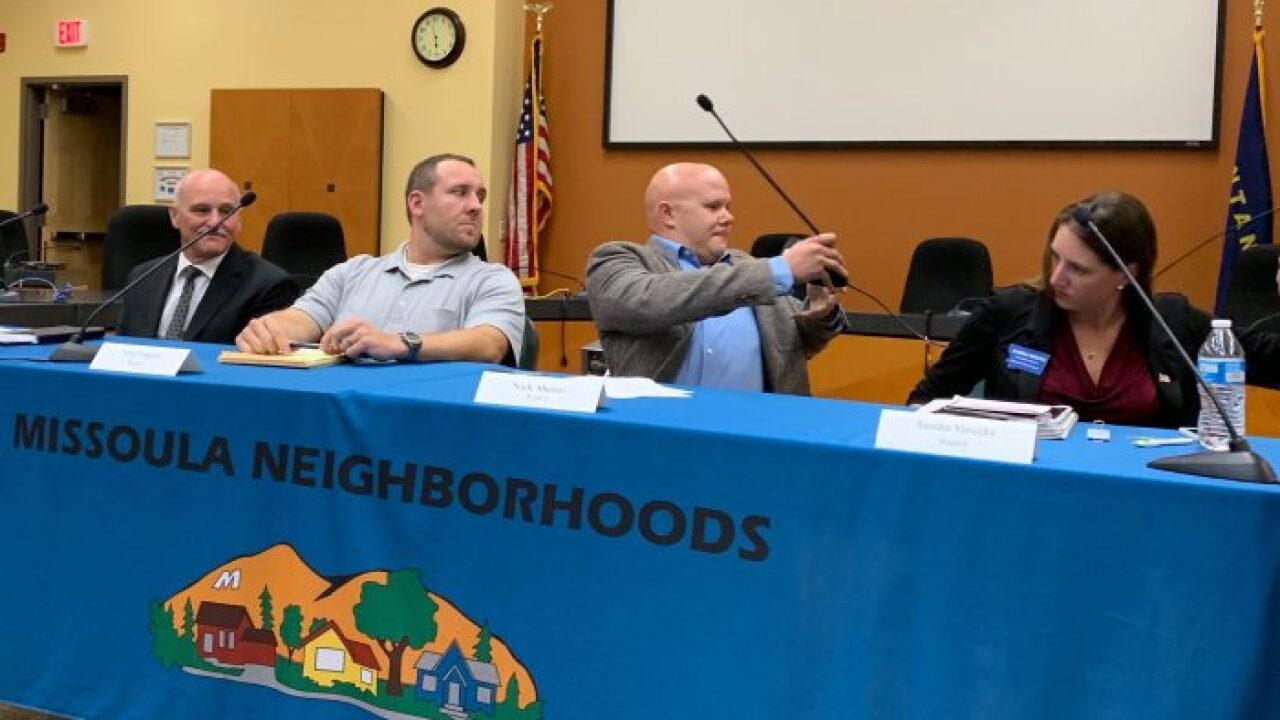 MISSOULA — Challengers for the Missoula City Council’s open seats in Wards 5 and 6 recently addressed issues ranging from climate change and chronic homelessness to the possibility of a local limit option sales tax and background checks for guns.

Different from a statewide sales tax, which Montana does not have, a local option sales tax would allow citizens to decide whether to impose a sales tax for a specific community use.

Montana law currently limits local option taxes to small resort cities, like Whitefish, Red Lodge and West Yellowstone. Larger cities, including Missoula and Billings, are prohibited from levying such a tax, so must rely on property tax receipts.

A Kalispell native and 25-year Missoula resident, Fregerio added: “I’m would be in favor of working with the state Legislature and pressuring the Legislature to raise the population limit for the local option sales tax; that’s currently keeping Missoula from having that.”

Fregerio said that from April to August 2019, the Missoula Tourism Board estimated that $307 million was spent by tourists visiting Missoula. Were a local option sales tax available, those visitors could have helped pay for city services and infrastructure.

He cited resort-heavy Whitefish as a good example of applying a local option sales tax.

“In Whitefish, from April to August, 25 percent of that (tax receipts) goes to tax relief,” added Fergerio. “So if we had $307 million this year, 25 percent would equate to $75.75 million. We’re not going to get that from cuts to the budget. This is a great revenue source we’re missing out on.”

“This is a real way that Missoula can grow,” echoed Nick Shontz, a data technician running for Michelle Cares’ open seat in Ward 6.

Missoula Mayor John Engen backs the broader local option sales tax because it would provide for “property tax relief while also benefitting citizens in terms of infrastructure and service.”

As for selecting potential services to be cut from the city’s budget, Vasecka instead listed the priority services she would preserve: first responders and infrastructure. Taking care of veterans, too, is among her platform priorities.

“That’s a very complicated question,” she said of potential cuts. “We need to move to a zero-based budgeting system,” including a method of examining every budget from scratch.

Shontz, citing his experience attending a local government citizens academy and working with University of Montana departments to alleviate budget shortfalls, said he would rely on private entities and experts to decide which services to cut.

Contos, who said he and his wife have started churches, own a carpet cleaning business and manage a few rental properties, said private property owners should step up.

“It’s probably taking a better look at what we’re spending our money on and how we can be a little bit more efficient,” said Contos. “There’s always been a big difference between business mindset and government mindset. If you don’t have the money, you don’t buy.”

Contos questioned spending money on city art projects in parks that can cost thousands of dollars.

“It’s things like that – we do need to beautify the place … but that type of thinking probably needs to be reeled down a little bit.”

Contos also questioned financing the Mountain Line bus system so it can offer free rides. Any fare amount, however small, would help, he said.

“That tells us there are people out there who cannot afford to ride the bus. If we cut that $100,000, those people are going to lose the ability to get to work, to get to school, to get to day care.”

During Missoula’s Climate Strike Action week, which is ongoing, the candidates said they personally help mitigate the effects of climate change by walking or biking to work, carrying reusable bags, recycling glass and other items, carpooling and driving energy-efficient cars. Shontz said he cuts out meat for lunch as a way to help lesson his carbon footprint.

“Climate change is the No. 1 issue facing us today,” said Shontz. “Our generation is the one who’s going to have to take action on this. It seems like we’re the only ones talking about it. I do agree that the city has a responsibility to fight climate change. I think we need to push for better recycling. Personally, my family has worked to decrease our waste as much as possible. We throw away about 13 gallons of garbage a week.”

Vasecka, wants the city to continue encouraging personal responsibility among citizens to do their part. She is a Sentinel High School and Montana State graduate, an election judge since 2015, an insurance agency employee who worries about the underfunded police department and senior citizens who are priced out of their homes.

Fregerio hailed the city for its proactive approach to mitigating climate change and emissions.

“If we have good trails, good roads, good sidewalks even, it would encourage a lot of individual responsibility with walking and biking,” he said.

”The City Council is a doing a great job addressing climate change and trying to have a look toward the future,” said Fregerio.

Contos questioned how much pollution Missoula emits, adding that “we need to change the way we do things.” On a personal level, he and his wife recycle cardboard and reuse plastic bags.

Background checks for gun sales also made an appearance at Thursday night’s debate, hosted by the Missoula League of Women Voters and Missoula Neighborhood Councils.

Revealing that he conceal-carries a gun, Fregerio said he considered bringing it to the candidate forum, but left it in the car because the city doesn’t allow guns in council chambers. He and Shontz, both hunters, support background checks for gun owners.

Shontz, who said he worked his way out of poverty in Missoula after landing his first union job, suggested expanding the background check database and making gun training mandatory for owners.

“We have a gun violence epidemic around the U.S. and we have to do something about it,” he said.

All candidates agreed that Missoula is growing and must be closely monitored as the city expands to the outer edges.

But Vasecka, Contos and Shontz questioned the financial cost of the pedestrian bridge built over Reserve Street, for example – both suggesting that private developers could have been used instead.

Fregerio, however, supports Tax Increment Finance funding for the bridge and the new Marriott that replaced the Missoula Mercantile building on Higgins downtown.

“The bridge connects the trail so that you can now ride from Missoula to Hamilton,” said Fregerio. “That’s part of the reason we have all these tourists coming in. It averages over 300 people a day who use that bridge. If 300 people a day had to stop and press the button to get across Reserve, imagine how much more congested Reserve would be without it.”

“TIF dollars is a great tool, if used properly,” said Vasecka, adding that “there’s a lot of tricky business going on,” with the new Stockman Bank building on Brooks Street – for which she said taxpayers are paying the interest after the city received a loan from Stockman Bank.

All candidates conceded that TIF is a complex subject that the public doesn’t necessarily understand. Most said resources should be made easily available to explain the TIF process.

However, Contos said, “TIF is not an appropriate tool for Missoula. People (developers) want to be here and they need to pay for that on their own dime.”

Caras Park is a classic example of a successful TIF project, said Fregerio, praising the foresight of planners.

In order to stem homelessness in Missoula, Shontos suggested universal health care, access to mental health care, treating drug addiction like a disease instead of a crime, and boosting city communication and coordination efforts with the homeless.

Vasecka suggested working with other Montana cities to curb homelessness.

“Not just City Council should deal with it,” she added.

As for creating affordable housing in Missoula, Vasecka said she does not believe in government subsidies for housing. Shontz is pro-development in neighborhoods like Catlin Street, where new apartments are going up to remedy “run-down” housing, and Skyview on the Westside – housing for those 55 and older.

Fregerio reminded everyone that because of Missoula’s peace-loving ambiance and nearby blue-ribbon fly-fishing streams, folks are willing to pay more for a house here.

In their closing statements, Fregerio said he’s running for council because of neglect in his ward.

“One of my representatives wasn’t doing the job,” added Fregerio. “If there’s a problem that needs to be fixed, you should probably step up and get it done.”

Contos said he wants to continue raising his family in Missoula, but he fears it could become overly priced and for the wealthy only, much like Boulder, Colorado.

“I want to be your voice,” said Vasecka. “I want to raise my kids in the city I was raised in. I want to make Missoula fiscally responsible again.”

Shontz said Missoula was “extremely welcoming” to him in 2002 and as a council member, he wants the city to continue to embrace that philosophy. He touted his technology experience and data-focused approach as top tools, should he be elected.