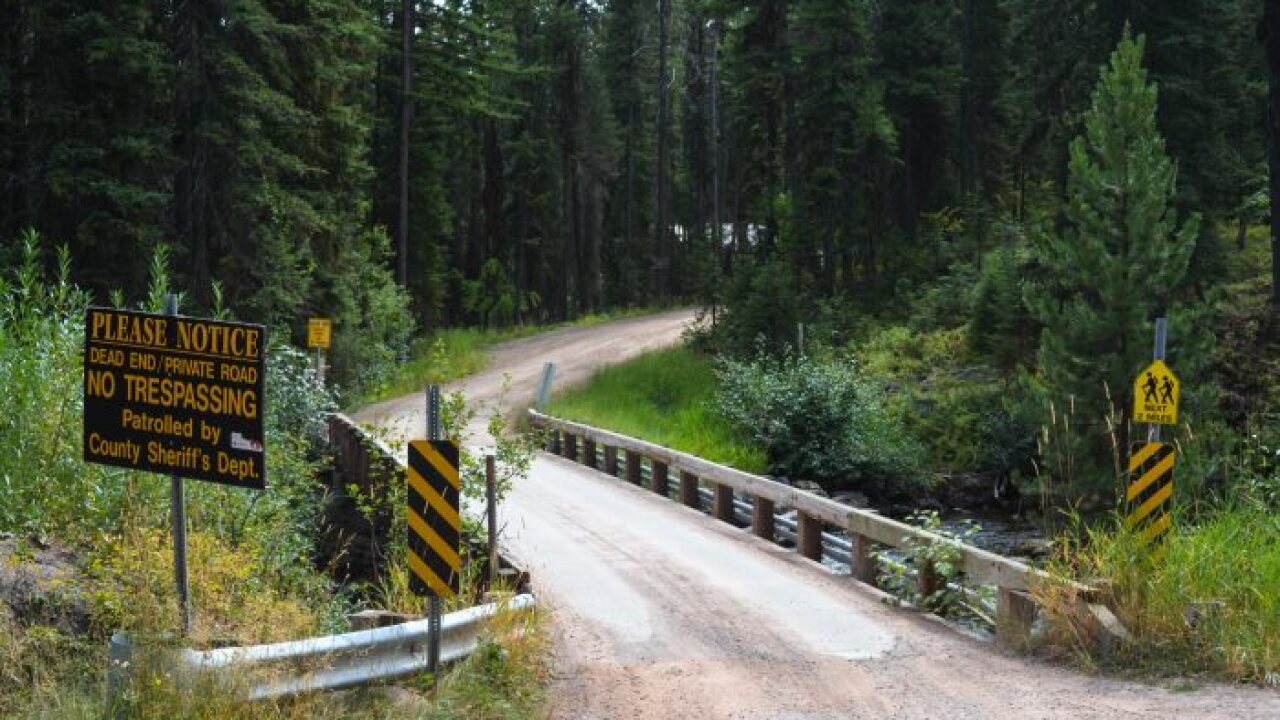 Dave Stalling/Missoula Current
The bridge, which crosses the Swan River near the outlet of Lindbergh Lake and leads to homes along the south and east shores of the lake, was built in 1978.

MISSOULA — A recent resolution adopted by the Missoula Board of County Commissioners – to change the boundaries of a Rural Special Improvement District northwest of Seeley Lake and assess landowners for maintenance of the Lindbergh Lake Bridge – resurrected two unresolved questions: Who has access when a public bridge leads to private property? Should bridge ownership be transferred from public to private hands?

After a public hearing earlier this month, commissioners unanimously approved a resolution adding properties to the rural district owned by landowners who benefit from the bridge, and remove properties owned by those who don’t.

The resolution also calls for an assessment on 116 private lots within the district, and levies $73,176.29 in taxes to pay for needed bridge maintenance, including the replacement of timber railings, patching concrete and applying a polymer overlay on the bridge deck, as well as inspection and engineering costs.

The resolution changes the way the assessment is calculated, from an assessment based on square footage of property to an equal tax for each parcel. Property owners will pay a one-time assessment of $636.22 on their 2020 tax bill.

“We did our best to make this assessment as fair and equitable as possible,” said county commission chairman Dave Strohmaier.

Several members of the Lindbergh Lake Homeowners Association spoke during the hearing, expressing concerns that public ownership of the bridge might give some people the wrong impression that the connecting private road is also public, or that the homeowners association is blocking public access to public lands, which it is not.

“We have no problem with the Rural Special Improvement District and taking care of the bridge maintenance,” said Clark Taylor, vice president of the homeowners association. “We’ll do it if you don’t. I just ask that you avoid language that infers ownership of the road and the bridge. There is no public road served by this bridge, and we are not sure why the county would want to maintain this bridge in its public inventory.”

Taylor said he felt that “public intent” was clear over the past 50 years — that the bridge is private, and the homeowners association would take care of it. “We can take this to a judge if we need to,” he said.

The bridge, which crosses the Swan River near the outlet of Lindbergh Lake and leads to homes along the south and east shores of the lake, was built in 1978 with taxes levied and raised from creation of Rural District 282. (Special improvement districts are created to raise money, through taxes, for the construction and maintenance of “improvements” such as sewage lines, roads and bridges, to be paid for by those who benefit from them.)

In 2015, the Montana Legislature passed a bill allowing county commissioners to transfer ownership of district improvements to property owners within those districts.

A few years later, in 2017, members of the Lindbergh Lake Homeowners Association petitioned the county commission to transfer ownership of the bridge from public to private.

After several public hearings, the Missoula County commissioners passed a resolution that denied transfer of ownership and stated, in part, that “Missoula County owns the bridge and is mandated by statute to adequately and suitably maintain and preserve the bridge and to provide for keeping it in proper repair and operation.”

That resolution also clarified that maintenance costs would be paid by property owners within Rural District 282, and that the work will be conducted by the Missoula County Public Works Department.

Although large “No Trespassing” signs on and near the bridge make it clear that the bridge leads to a private road, one sign signifies that foot traffic is allowed.

According to the U.S. Forest Service, there is a “nonmotorized, public-prescriptive right of way” that allows people to walk across the bridge and along the road for two miles to reach the Jocko Trail, a centuries-old trail that leads from Lindbergh Lake through the Mission Mountains to lands owned and managed by the Confederated Salish and Kootenai Tribes on the Flathead Valley side of the mountains.

The trailhead is on private land, but public use is allowed through a conservation easement. (The Jocko Trail can also be accessed from the nearby Crystal Lake Trailhead).

“It is the position of the county that this is a public bridge,” Strohmaier said during the Sept. 5 public hearing. “This resolution is separate from an earlier resolution that mentions ownership of the bridge. The resolution we are looking at today does not. We are not going to go back two years and amend some resolution that a previous commission adopted. It may not be a perfect approach, but it’s a way to get the bridge fixed.”

Commissioner Josh Slotnick agreed. “I’m concerned that we’re blurring things here a bit,” he said. “We’re here today to talk about changes in the Rural Special Improvement District and maintenance of the bridge, so that the bridge remains safe and no one gets hurt in the short term.”

As for the long-term ownership of the bridge, Slotnick told the members of the homeowners association: “I would advise you to go to district court and get this resolved once and for all.”