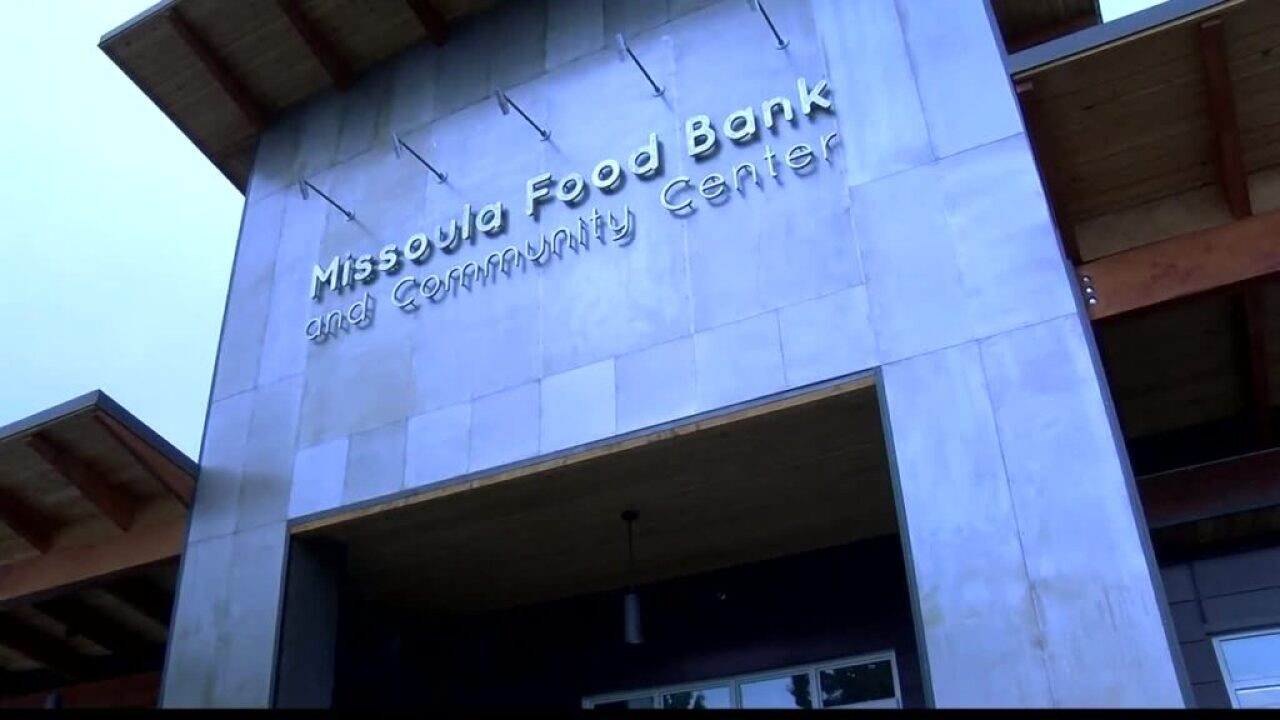 MISSOULA — Before COVID-19, the Missoula Food Bank ran as a small free grocery store, with customers having the choice to grab only what they needed.

Now, the once-bustling non-profit has an empty parking lot and lobby.

The scarcity of visitors has resulted in a sign on the curb to remind people that the Food Bank is even open.

The Food Bank temporarily laid off almost all of its over 700 monthly volunteers and cut its staff in half.

But the community’s food need has drastically increased since the start of the pandemic, with March 16 having the highest number of people needing food in the history of the Food Bank —360 families, or over 1,100 people in one day.

This, in addition to the thousand meals a day for the kid's program and 200 for Poverello lunches (with all that food needing to be put into individual bags), the Food Bank staff has never been busier.

“That’s a lot of meals,” Amanda Ceaser said. “That takes a really long time.”
As a result, they’ve had to completely shift the way they operate their store and even their job roles.

Before the pandemic, Ceaser worked as the events and marketing coordinator, attracting vendors, finding venues, and setting up events.

But all of the events have been canceled for the foreseeable future, transitioning her role as the events and marketing coordinator to an organizational leader during COVID-19.

Her job has changed from spending most of her hours in the office to preparing prepackaged carts of perishable and nonperishable goods.

Caesar said the Food Bank has partnered with the recently established Missoula Mutual Aid Warehouse to deliver food and essential goods, such as toiletries or pet food, to at-risk people or people who don’t have access to transportation.

The warehouse began just after COVID-19 first arrived in Missoula, but despite its success, the program will stop on July 2.

For now, the Food Bank has to focus on day-to-day necessities for community members, but Executive Director Aaron Brock believes the pandemic has exposed many systemic problems within our society.

“The families that are most impacted by this pandemic are the families who were in the margins to begin with,” he said.

Lower-income families can’t shelter in place when they have sub-par living conditions, lack of access to good healthcare, and no computer.

While there’s an urgency to help people, there’s also an opportunity for people to learn.

Brock said that “there’s a tremendous amount of privilege that comes with sheltering in place.”

The future of the food bank, like many other businesses, is opaque.

The economy hasn’t bounced back, and the looming threat of a second wave limits many stores from re-opening.

Despite this uncertainty, Brock said the Food Bank is “confident in its ability to keep having food for every family who needs it, through COVID and beyond.”

Many people in the community have stepped up to donate extra food or money, letting Brock and other full-time workers at the food bank feel like they’re not alone.

“We’re doing this with this community as a whole, who’s marching with us,” he said.