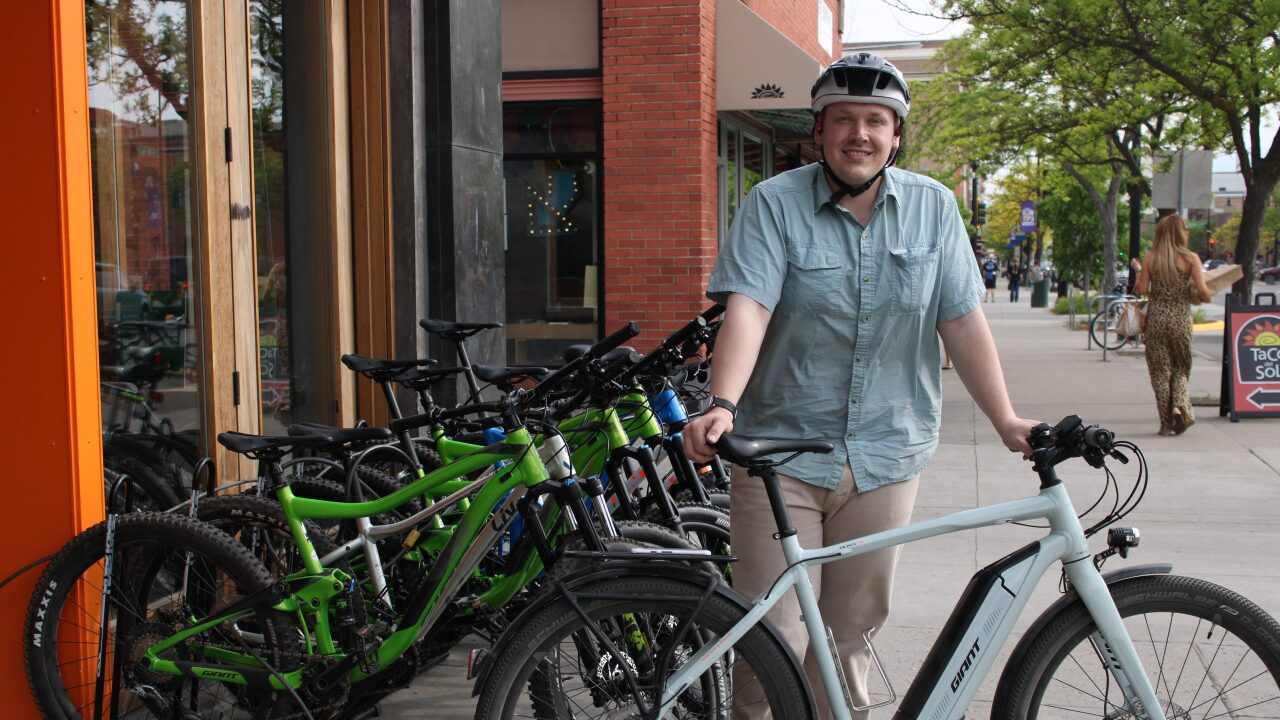 <i>Mari Hall/Missoula Current file photo</i>
<i>Bike Hanger employee Jay Evans specializes in e-bike repair, and owns a Class 3 e-bike that he rides every day. Legislators are deciding whether the state should do more to regulate e-bikes, but Missoula wants it left to local governments. </i><br/>

MISSOULA — Legislators are deciding whether the state should do more to regulate e-bikes, but Missoula wants it left to local governments.

Missoula City bicycle/pedestrian program manager Ben Weiss recently told the Legislative transportation committee that Missoula took a hard look at e-bikes this past spring and summer before being one of the first Montana towns to officially allow them on streets and paved bike paths such as the Kim Williams Trail.

Weiss was asked to outline Missoula’s handling of e-bikes as part of the committee’s study of bicycle and pedestrian pathways and related challenges with safety and funding.

Weiss said the Missoula City Council took up the issue after bike-share companies asked if they could include e-bikes in their fleets. After several bike shops said that e-bikes were the fastest growing part of their business, “we knew we wanted to get ahead of the game,” Weiss said.

Part of the challenge is defining what qualifies as an “e-bike” as opposed to a “motorized vehicle.” That’s getting harder all the time as manufacturers keep adding modifications, producing heavier or faster bikes.

The U.S. Consumer Product Safety Act says anything that has a top speed of 20 mph and a motor of no more than 750 Watts qualifies as non-motorized. The 2015 Montana Legislature also chose a 20 mph limit as part of the definition of e-bike.

Then in August, the Department of the Interior decided that its agencies, such as the National Park Service and the Bureau of Land Management, would no longer classify e-bikes as off-road vehicles. That means e-bikes can potentially venture into a lot more places.

Some in Missoula worried that fast and quiet e-bikes would be hazardous for pedestrians while others argued that e-bikes allowed more people to commute without cars.

In the end, Missoula’s rapid growth tipped the scales. The City Council chose to allow e-bikes with either pedal-assist or throttles on pedestrian routes as long as they couldn’t exceed 20 mph. However, they are not allowed on city hiking trails. Anything faster is considered a moped.

“Just to keep (traffic) congestion levels at what they are today, we need to double the percentage of people walking and biking,” Wiess said.

Weiss told the legislators that e-bike riders in Missoula have been mostly courteous so far, and even with regular bicycles, there’s always a bit of conflict on bike paths. For that reason, the city is initiating a 10 mph speed limit on bike paths.

Representatives were also scheduled to present how Bozeman handled the issue, but weather and bad roads kept them away.

Missoula Sen. Diane Sands asked Weiss whether the legislature should be more proactive on regulating e-bikes statewide or just clean up some of the more vague language in the 2015 bill.

“There’s always room for things to go awry if you open the law back up,” Weiss said. “While there is gray area, so far we think we’re navigating it okay as a community.”

Ginny Sullivan of Adventure Cycling recommended that the committee members look at what other states have done.

“It might be good for Montana to be in line with what other states are doing,” Sullivan said. “As people travel from state to state it gets more confusing. And bikes are very mobile. They get on the back of the car and they travel with you.”

Doug Habermann, Bike-Walk Montana executive director, said his membership was still split on the use of e-bikes. But they make economic sense so the committee should give them some consideration.

“It costs about $9,000 a year to maintain your vehicle. So people look at them as an economic way to use the system,” Habermann said. “There will be more coming.”