HELENA – A bill creating a five-year moratorium on property taxes for new fiber-optic cable in Montana would help expand high-speed Internet into underserved areas of the state, its sponsor said Tuesday.

Sen. Jason Ellsworth (R-Hamilton) said the tax moratorium in his Senate Bill 239 could be a key economic driver for the state, particularly rural areas.

Telecom companies and other business interests spoke for the bill, saying it would help offset the high cost of expanding fiber-optic cable to bring both Internet and cell-phone service to more of rural Montana.

“What Senate Bill 239 does is leave more money in my pocket on an interim basis, so I can build broadband connectivity out to more customers,” said Jason Williams, CEO of Blackfoot, a Missoula-based telephone co-op and telecom provider. 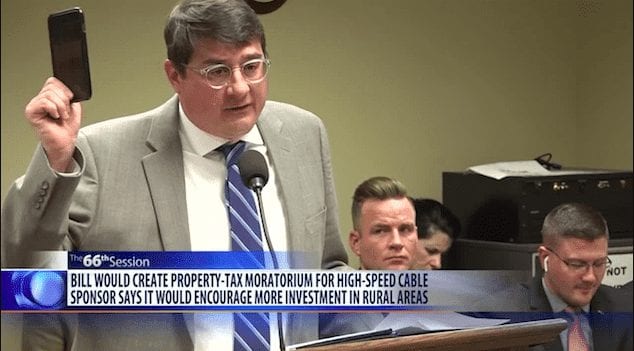 Yet local governments and the Bullock administration opposed SB239. They said it’s another property-tax exemption that narrows the tax base that cities and towns rely on for revenue.

Tim Burton of the Montana League of Cities and Towns said almost 99% of property tax revenue in Montana goes to cities, towns and school districts.

“This (bill) probably has a good policy goal, but what we need to do is take some time to look comprehensively at what our tax policy needs to be in Montana,” he said.

Eric Bryson of the Montana Association of Counties also noted that state law already includes a property-tax abatement for new businesses, that can be requested and granted after public hearings.

It allows abatement of up to 75% of the initial property-tax bill – not an entire moratorium like SB239, he added.

“It’s an incentive for the proponents of this bill to do exactly what they say they want to do,” he said.

Under SB239, new fiber-optic cable and equipment to deploy its use would be exempt from any property taxes for five years. Starting in the sixth year, taxes would be phased in at 20% a year for five years.

Geoff Feiss of the Montana Telecommunications Association said one of the group’s members spends about $2.7 million a year on fiber-optic networks. SB239 would save the company about $330,000 over 10 years, he said.

Williams of Blackfoot said his firm would use that money to invest in more fiber-optic cable within its service area.

Doran Fluckiger of Southern Montana Telephone, which is based in Wisdom, said the company has installed more than $15 million worth of fiber-optic cable in the last decade to serve about 650 customers – and that its property taxes have increased 135 percent.

“Many areas don’t provide fiber-optic service due to the high cost,” he said. “Southern Montana is still installing fiber-optic cable for our customers, but the cost is exorbitant.”

The Senate Taxation Committee will vote later on the bill.