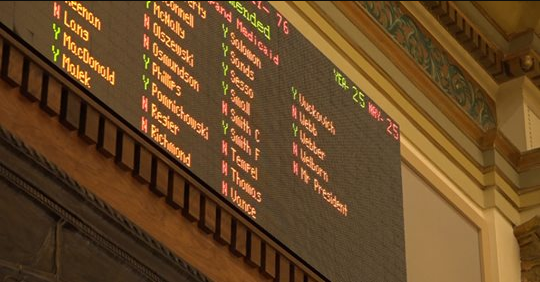 HELENA — The bill to continue Montana’s $700 million-a-year Medicaid expansion program failed on a 25-25 vote in the state Senate Thursday, setting up a last-ditch effort to revive the measure on Friday.

Supporters of House Bill 658, which extends the program past its June 30 expiration date, told MTN News they will ask the Senate to reconsider its action on Friday and keep the bill alive for another debate and vote.

Medicaid expansion, enacted in Montana in 2015, provides government-funded health coverage to 96,000 low-income adults in the state. The federal government funds 90 percent of its costs.

Thursday’s dramatic vote came after two hours of debate on the Senate floor and a flurry of vote-switching in the seconds before the final tally was recorded, as some senators switched from “yes” to “no,” dooming the bill’s passage.

Five Republican senators joined all 20 Senate Democrats in support of HB658, while 25 Republicans — including some who have previously supported Medicaid expansion — voted against it.

Earlier this week, some Senate Republicans indicated they might withhold their support for Medicaid expansion until they’re confident that a separate, unrelated proposal will pass, to help NorthWestern Energy buy a portion of the Colstrip 4 power plant and related transmission line.

That proposal is contained in a bill currently sitting in a House committee, awaiting possible action on Friday — or, could be shoe-horned into a separate bill that’s still in the Senate.

“The 96,000 Montanans who rely on Medicaid expansion don’t have votes to trade,” he said in a statement. “Republican senators should be ashamed.”

HB658, one of the biggest bills before the 2019 Legislature, passed the House late last month on a bipartisan vote and appeared headed toward passage until this week’s stumble in the Senate.

On the Senate floor Thursday, Republican leaders blasted the proposal as profligate spending that is bankrupting the state and the country.

“It’s good for this generation. And to hell with the people that are going to pay the bill, which is my kids and my grandkids — and yours, too. And this isn’t a Republican problem, it’s not a Democrat problem, it’s our problem.”

Sen. Dee Brown, R-Hungry Horse, an opponent of the bill, spent more than six minutes reading a list of how much all Medicaid money, including the expansion program, had gone to the state’s hospitals, totaling $1.345 billion in the last two years. Medicaid also covers the disabled, the elderly, and pregnant women and some children, in low-income families.

“I don’t think Medicaid expansion is about the health of Montanans,” she said. “I think it’s about the money. The money going to the hospitals. … I’m voting with the taxpayers today.”

Supporters said that money has kept many rural hospitals in Montana from closing, and that the program overall has been a huge economic benefit for the state.

“If it hadn’t been, 50 percent of Montana’s 18,000 businesses wouldn’t have an employee that is currently on it,” said Sen. Jason Small, R-Lame Deer, the bill’s lead sponsor in the Senate. “And that’s a cold, hard fact. … This is going to help people go back to work, it’s going to make people healthy again, it’s going to get them off their addictions and once again function in society, so they can become a member of a productive and healthy workforce.”

Senate Minority Leader Jon Sesso, D-Butte, also noted that Montana hospitals are paying for at least half of the state’s share of the costs, through a new tax, and said the bill is the result of bipartisan compromise.