GREAT FALLS – The Great Falls firefighting community is mourning the loss of one of its own.

“It is with a heavy heart as we announce the passing of Brother Emeritus Jason Baker. He will be greatly missed. He has been a true Brother, Warrior, Mentor and Friend. Our thoughts and prayers go out to his family, coworkers and friends.”

“It is with broken hearts that we announce today that Brother Jason Baker, from IAFF Local 8 has lost his battle with cancer caused by firefighting.

Brother Baker’s legacy of sheer determination and selfless devotion to his local, the IAFF, his brothers and sisters, and most of all his family, will be sorely missed.

Please keep his wife and two children in your hearts and minds in this difficult time.” 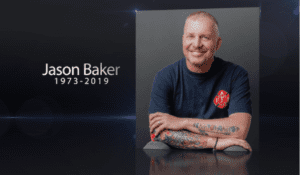 Baker was diagnosed with adenocarcinoma, or stage four lung cancer, in October of 2016. He was forced to retire from Great Falls Fire Rescue at the end of 2018.

Baker used his illness as a platform to promote health and safety for firefighters across Montana.