MISSOULA – There have already been two fatal accidents on Montana’s roads this Memorial Day weekend.

One man died on Interstate 90 in Butte on Saturday while a motorcyclist died after crashing near Bigfork early Sunday.

The accidents highlight the fact that the Memorial Day weekend is the start of one of the deadliest and busiest times on Montana roadways.

Statistics from the Montana Highway Patrol show that 45% of highway fatalities happen between the Memorial Day and Labor Day weekends.

The MHP also reports that in 2017, 58% of the people killed on Treasure State roads were not wearing a seatbelt — and 65% of those were ejected from their vehicles. 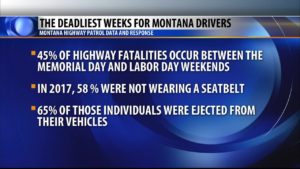 The Patrol can’t be sure until the data is gathered, but some believe this year those numbers may decrease.

“At the beginning of summer, people like to get out which puts more people on the roads,” MHP Sgt. Chan Barry told MTN News.

“But this weekend has [seen] moderate temperatures [and] decent amounts of rain, which is keeping people inside and they’re not traveling — they don’t seem to be traveling quite as much,” he added.

There are more troopers on the roads in Montana with an increase of patrols expected to last until June 2 as part of the national Click it or Ticket campaign.