MISSOULA – The Montana Highway Patrol reports that 45% of highway fatalities happen between the Memorial Day and Labor Day weekends.

Reporter Lauren Heiser went on a ride along with the MHP to learn more about the challenges our troopers face each day — and how you can help make the Treasure State highways a safer place.

“We always when possible want interactions with the public to always be positive and we want it to be to where everybody leaves feeling like they’ve made a difference or have learned something,” said MHP Trooper Carl Ward.

The MHP makes education a priority on the daily beat, especially during the summer months — hoping that by doing so they will reduce the number of fatalities on Montana’s roadways.

Trooper Ward pointed to one example he recently saw while on duty involving a minor who hit a tree.

“Whether that be the young driver that is driving too fast for road conditions has a minor collision — get them to understand that although today they were lucky with the events that happened — they coulda gone a totally different direction,” Trooper Ward explained. “And get them to understand what is more common in those events versus what may be happened with them.”

Even with an added emphasis on education, Trooper Ward says they often encounter the same people, committing a similar offense. 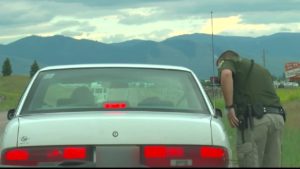 “It is tough when you feel like maybe that first encounter you maybe tried to do more education with them then necessarily enforcement as far as writing tickets,” he said.

“And then six months, a year, two years later, you find that you go back and deal with those same people. And now you have to deal with something much more severe than the first time you contacted them,” Trooper Ward added.

But he told MTN news that you’ll never get a warning from him for not wearing your seatbelt or driving recklessly with a child in your vehicle.

“And you know, you have some kind of enforcement tickets warnings — anything like that. They feel that…they are treated fairly they’ve learned something,” Trooper Ward said. “And we can feel like we’re making a positive difference with the community and the motoring public.

Statistics show that in 2017, 58% of people who died in crashes were not wearing a seatbelt.

Meanwhile, the National Highway Safety Administration reports the number of crash fatalities dropped from 2016 to 2017. The same is true for Montana, but according to the state’s 2017 crash data report, the number only declined by four.

Law enforcement officers say there is still a lot of work to be done.