PARADISE VALLEY, Mont. – There are places to mine gold, but for at least the next 20 years, it won’t be on the border of Yellowstone National Park.

That’s the message on Monday from Interior Secretary Ryan Zinke, who signed a 20-year moratorium on mining near the park. 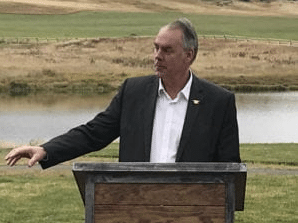 Far from the turmoil of Washington DC, Zinke gathered with several members of the Yellowstone Gateway Business Coalition, not far from where a proposed gold mine would have been.

“Public lands is not a Republican or a Democrat issue. It’s an American issue. And there are some things that are more important than politics,” Zinke said.

Those gathered pointed to the importance of nearby Yellowstone National Park and the Yellowstone River downstream from this gathering.  Secretary Zinke declared this place special.

“I graduated with a degree in geology and I’m a pro-mining guy,” said Zinke. “I love hard rock but there are places to mine and places not to mine. And you have to look at the American conservation ethic of best science, best practices, greatest good longest term.”

Today’s announcement didn’t just happen overnight. In fact, when Zinke first became involved, he was Congressman Zinke — today, signing as Secretary of Interior Zinke, using what he says is the full power of his office.

“So today we’re going to put in place, within the extent of my powers as Secretary of the Interior, a 20-year moratorium. If I could make it permanent I would,” Zinke said.

Secretary Zinke noted a permanent decision would have to come from Congress.