HELENA – Donors from California and the New York and Washington, D.C., areas have contributed about 40% of the money fueling Gov. Steve Bullock’s presidential campaign this year — and played a big role in financing his exploratory efforts as well.

Bullock, one of 24 Democrats running for president, officially launched his presidential bid May 14 and reported raising $2 million in campaign funds through June 30.

That amount puts him at 14th among the candidates, in money raised — but it’s much less than the front-running candidates, such as Vice President Joe Biden, who took in $22 million from April to June, and South Bend, Indiana, Mayor Pete Buttigieg, who raised almost $25 million during the same period.

Bullock’s campaign said he had donors from every state in the union, and his report filed Monday generally reflects that — but some states loomed larger than others, for donor support.

The governor also formed an exploratory political action committee, the Big Sky Values PAC, in mid-2017, and used it to travel to political events around the country before officially launching his campaign.

The PAC raised $2 million through May and transferred nearly $16,000 to Bullock’s presidential campaign.

An MTN News analysis of the source of money for both the campaign and the PAC shows:

Residents from three states — California, New York and Connecticut — accounted for about $1 million, or slightly over half of the entire take for the Big Sky Values PAC.

It’s also likely that Montanans made up at least part of the “non-itemized” individual donors giving to both entities. These non-itemized donors have accounted for almost one-fifth of his presidential campaign fund ($464,000) but only 6% of his Big Sky Values PAC money ($124,000). 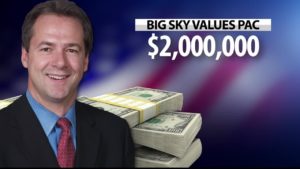 “Non-itemized” individuals generally are those who give less than $200.

Bullock has had a few big-name donors, although they haven’t necessarily given large amounts of money. For example, actress Jane Fonda, who co-hosted a fundraiser for Bullock June 20 in California, donated $1,000 to his presidential campaign, and actor Jeff Bridges, who has property in Montana, gave him $500.

Bullock also ended the June 30 fundraising period with $1.5 million in his presidential account.

The Big Sky Values PAC spent most of its money on travel, catering, computer equipment and a range of consultants during the past two years — including $425,000 on two consultants who helped him raise the money in the first place.