There’s nothing like paying a fee to access cash that’s already yours — and for banks, the fee business is getting more and more lucrative.

Banks charged noncustomers record amounts to use their ATMs this year, according to a Bankrate study, with the average ATM charging $3.02. Plus, the average bank charge to use an out-of-network ATM is $1.66. That makes the all-in average to withdraw your own money from an unknown bank $4.68. And it means ATM fees for noncustomers have risen for the past 14 years, said Bankrate analyst Greg McBride.

“The reason that’s gone up every year is no one is worried about alienating noncustomers,” he said. 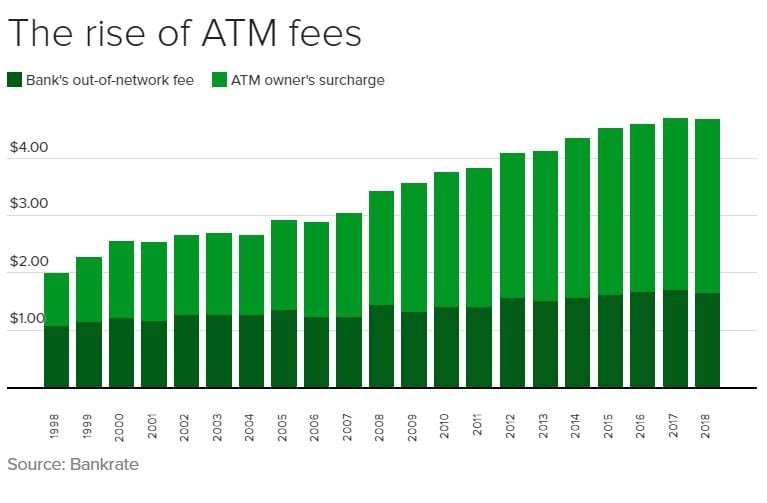 Among 25 major metro areas, Detroit has the highest average out-of-network ATM fee, Bankrate found, at $5.28. But even among this group, there’s not much range: The lowest average fee, in St. Louis, was “only” $4.25.

With interest rates staying low until relatively recently, banks have increasingly turned to fees to make money. Aside from upping ATM fees, banks have also done away with formerly fee-free products, like free checking accounts. Other pressures, like regulators restricting overdraft fees, could also be squeezing banks to turn a profit from ATM networks.

It’s also easier than ever to go cash-free: Electronic options like Apple Pay and Google Wallet are gaining broader acceptance. And a small contingent of retailers are turning away from cash altogether.

Somewhat counterintuitively, that doesn’t decrease ATM fees, McBride said. Instead, lower demand creates a vicious spiral for customers because banks must spread the cost of maintaining their ATM networks across fewer overall transactions.

The better news is that customers don’t have to pay ATM fees if they don’t want to. Even as Americans are making fewer stops at an ATM, networks of these cash dispensers are getting bigger, making it possible to find an in-network ATM that won’t charge a fee. “You can literally have tens of thousands of ATMs available to you around the country,” said McBride, “even if you’re [a customer of] a smaller bank.”