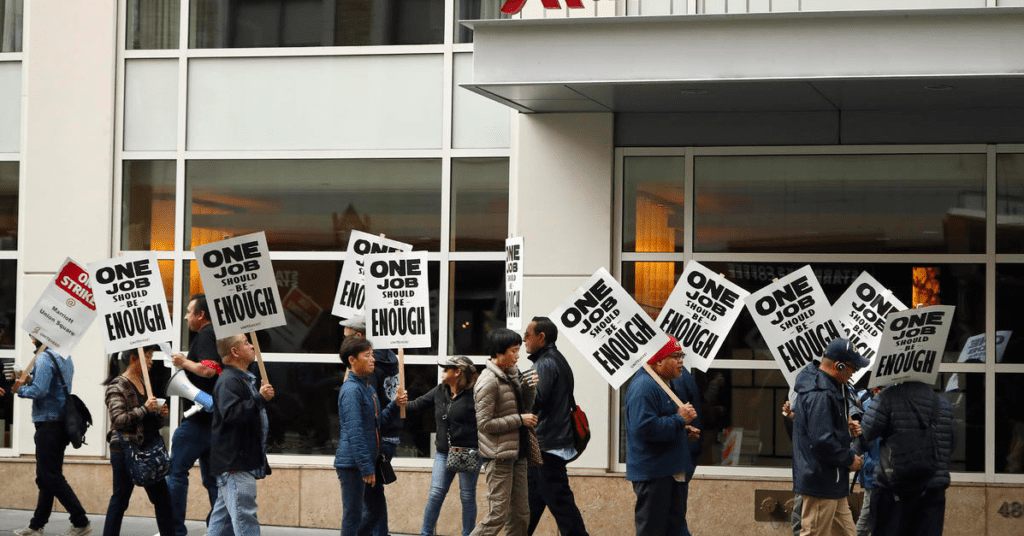 Thousands of hotel workers in eight U.S. cities say they’ll remain off the job until a new contract is reached with Marriott International. About 7,700 employees of the world’s largest hotel chain are now walking picket lines in Boston, Detroit, Oakland, San Diego, San Francisco and San Jose, as well as two cities in Hawaii.

Represented by the labor union Unite Here, the workers are calling for higher wages, rules guarding them against sexual harassment and protections from being replaced by technology. Among other demands aimed at improving working conditions, they are also asking the company to equip hotel staff with “panic buttons” in case guests become threatening or violent.

“Marriott is the richest and most profitable hotel company in the world, and by taking them on in this historic hotel worker strike, Unite Here union members are going to change the lives of all workers in our industry,” D. Taylor, international president of the union, said in a statement.

Marriott said in a statement that it’s disappointed that the union had called a strike, but said its hotels remain open. “While we respect our associates’ rights to participate in this work stoppage, we also will welcome any associate who chooses to continue to work,” a spokesperson for Marriott said by email.

Union members walked off their jobs at Marriott properties in four California cities last week, with workers in Detroit joining the work stoppage on Sunday and employees in Hawaii following suit on Monday. Workers in additional cities may strike “at any time,” according to Unite Here.

“We put a couple things on the table and nothing is happening, so it’s got to resort to this,” Stephen Easley, a cook at a Hilton in San Francisco, who marched alongside Marriott workers on Monday. “We got to be heard some way,” he added.

“We’re asking for significant raises that bring workers up above the poverty line. We want people to be able to work full-time at Marriott and still be able to provide for their families. We’re looking at dollars on the hour raises,” Rachel Gumpert, a spokesperson for the local chapter of the union, told a CBS affiliate in San Francisco.

In Boston, members of the visiting New York Yankees caused a ruckus on Friday by crossing the picket line to enter the Marriott-owned Ritz-Carlton, giving Boston Red Sox fans another ax to grind against their archrival. The Yankees weren’t the only professional sports team to cross another union’s picket line, with the National Hockey League’s Edmonton Oilers also causing a stir while in Boston for a game against the Bruins.

Contracts covering about 12,000 bellhops, front-desk clerks, housekeepers and restaurant workers expired in July and August, and workers authorized the strike actions three weeks ago. Unite Here and Marriott returned to to bargaining table two weeks ago, but failed to reach agreement.

Under the banner “One Job Should Be Enough,” the union began protesting employee conditions at Marriott in June.

Separately, Unite Here has resolved contract disputes involving thousands of hotel workers at two dozen properties including those owned by Hilton and Hyatt in Chicago, where strikes began in September.

Marriott, which acquired Starwood for $13.6 billion in 2016, and the Ritz-Carlton, Westin and Sheraton brands are among its 30 that operate 1.2 million rooms in more than 125 countries.

Unite Here represents 270,000 workers in industries including hotel, gaming, food service, manufacturing and transportation in the U.S. and Canada.